Compute a Pvalue from the averaged Pearson and Spearman rho

On the one hand, Pearson correlation is sensitive to outliers, while Spearman is not. On the other hand, if you have quantitative data, Spearman will treat it like ordinal data.

if you have quantitative data, Spearman will treat it like ordinal data.

Well, sort of. Certainly it's the case that any monotonic increasing transformation of the observations won't alter the correlation, and only the rank ordering of the observations matters. That's not quite the same thing as the original data having ordinal categories (which would usually tend to induce ties in the data, for example).

How about averaging Pearson's and Spearman's rho? Is that legit?

It depends on what you mean by "legit".

If there is a correlation just caused by outliers, the average should be less sensitive.

Consider that instead of having a population value for the 'contaminated' correlation, $\rho^*$ that you don't think is useful (because it's 'just caused by outliers'), you'd prefer a value close to $\frac12\rho^*$... is that really more meaningful? In most situations, possibly not.

Or thinking in terms of estimating the uncontaminated correlation, consider this case, where a strong positive correlation is rendered even stronger negative: 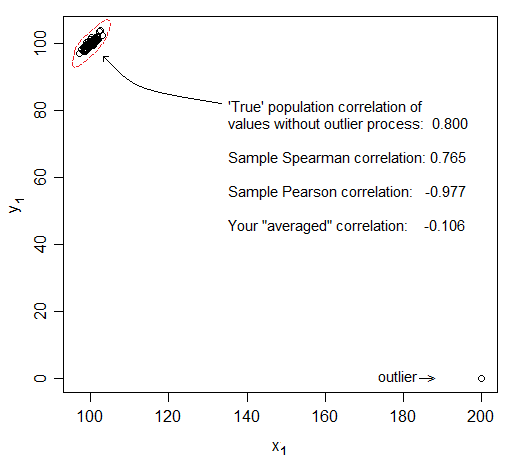 The "averaged" correlation is still negative. Is that more useful than just taking Spearman? Not in this case.

And quantitative information is not completely ignored.

The significance of both Pearson's and Spearman's rho can be computed as $t=\rho\sqrt{\frac{\text{df}}{1-\rho^2}}$. Can I apply the same to get the t-statistic and the p-value of this averaged rho value?

Possibly (I doubt it, but one would have to check).

The big question is whether it means much to do it. You could only improve the efficiency at the normal by the very tiniest amount, but you will lose most of the value that is brought by the more robust measure.

Averaging Pearson and Spearman is an original idea, but in practice it just avoids the key issue of what you should be estimating in an arbitrary way.

Why not use weights other than equal weights, such as 0.7 Spearman and 0.3 Pearson or Spearman 0.3 and Pearson 0.7? There is nothing automatic about the choice of weights 0.5 and 0.5, outside an appeal to simplicity.

It's not as if there is a Platonic entity which we call "the correlation" that we are seeking, like the Holy Grail. The perspective "What are we estimating here?" is always worth following and the answer would have to be that the average of Spearman and Pearson is just estimating the same measure in the population. As that is a highly non-standard procedure (meaning, I've never seen this proposal before) you would have to explain that and sell it to an audience or readership.

Whenever Spearman and Pearson correlation disagree, as is very common, the key question is which correlation makes more sense for the analysis and whether other approaches make more sense in turn. Working with one or other variable on a transformed scale is one common way forward.

Note. How to get P-values is to me a secondary issue as I don't see that this is a good idea any way. If you were determined, you could try bootstrapping to get confidence intervals. But when there is an outlier present, then bootstrap samples will divide sharply into those containing no copies of the outlier and those containing one, two, ... copies of the outlier. The sampling distribution is thus going to be multimodal.

Not the answer you're looking for? Browse other questions tagged correlation p-value pearson-r spearman-rho or ask your own question.

358
What is your favorite “data analysis” cartoon?