McNemar's test statistic is given by:

However, the correction for the McNemar's test statistic requires 1 (not 0.5) be subtracted, which is not the same as other chi-square tests. Why?

As a result, when you take $|B-C|$ the total of the two continuity corrections is always $-1$.

(This post may be of some possible interest as well.)

You need to think about what is "as, or more extreme" here.

The calculation effectively conditions on the discordant-pair total $B+C=N_{d}$ and does an approximation to the binomial test that $p_B=0.5$. Imagine you have observed say $b=4$ and $c=12$: 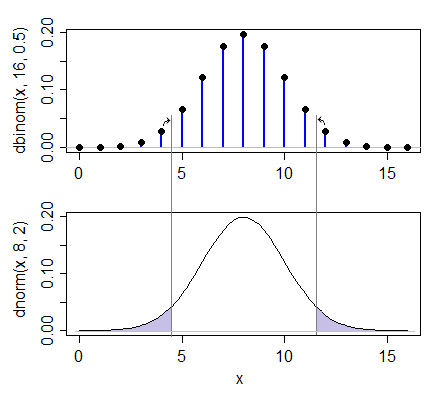 However, the continuity correction reasoning itself doesn't rely on the binomial -- it only relies on the fact that we want to look at the cases that are at least as extreme as $(4,12)$, which are $b=4,3,2,1,0$ plus the "other tail" values $12,13,14,15,16$. Then the usual continuity correction reasoning would say you want the approximating normal from 4.5 down and from 11.5 up.

So more generaly we're always taking both values toward the middle, $(b+c)/2$ by 0.5, which means the larger values reduce by 0.5 and the smaller values increase by 0.5. This reasoning follows through to the squared form used in the chi-squared version.

Not the answer you're looking for? Browse other questions tagged hypothesis-testing chi-squared-test mcnemar-test yates-correction or ask your own question.

9
Continuity correction for Pearson and McNemar's chi-square test
1
Mann-Kendall trend test, z-Transformation of test statistic, Why is the mean +/-1?