Any general material on how to update with multivariate normal priors would do., such as text book chatpers or paper, notes etc. I tried to google, nothing similar/relevant was found.

I read this in a paper(Erdem 1998) but could not understand how they derive the posterior upto to time T. No idea how to type equations here so i used a screen shot for my questions.

Some background information. The key assumption here is consumers does have a perfect perceptions of the TRUE quality of a product (brand quality etc.). But the true product quality is fixed in perspective of the company. The consumer’s perceived quality is different from true quality but depend on the true quality. Each time they purchase, they update their belief on the true quality (or mean quality). The consumers evaluate the product quality as a Bayesian. 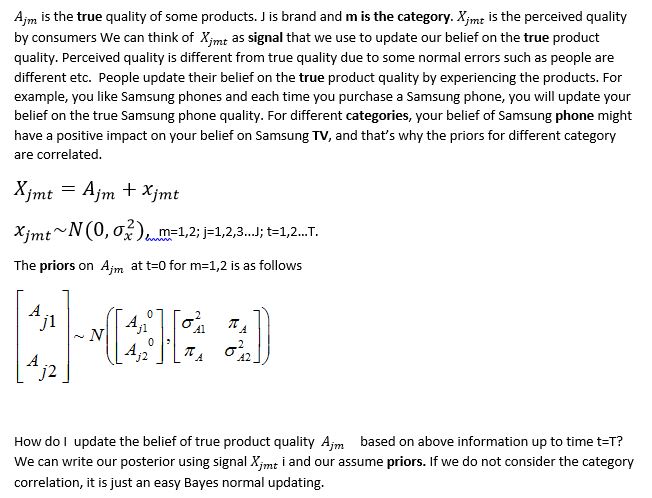 Assuming that the prior can be expressed as a multivariate normal distribution (with off-diagonal correlations allowed) and at each time $t$ you have a measurement of one or more of the qualities which can also be considered to have errors distributed as a normal distribution with a known (or assumed) correlation matrix, then you can evolve the maximum likelihood estimates of the qualities by a Kalman Filter.

In fact, this is pretty much an exemplar of problems solved by Kalman Filter (which updates the estimates and the estimated correlation matrix in tandem based on each "innovation" difference between predicted and measured value). Under the normal distribution assumptions, the Kalman FIlter is exact and has the virtue of not having to retain state information about previous measurements or assumptions.

Since there are many decent explanations of Kalman Filters on the web (including a good article in Wikipedia) I won't go into details about the algorithm, other than to say that it involves one matrix inversion (plus other cheaper operations) at each time step.

5
How to set the priors for Bayesian estimation of Multivariate Normal Distribution when the correlation matrix has small values?