At some point, when talking about including many regressors in the structural time series model he introduces the spike and slab priors of regression coefficients and says that they are better compared to penalized methods.

Scott says, referring to an example of a dataset with 100 predictors:

At this point he introduces the Spike and Slab priors.

I think I got the intuition, but I want to be sure about it:

I'll answer your third question first and address your other two later. 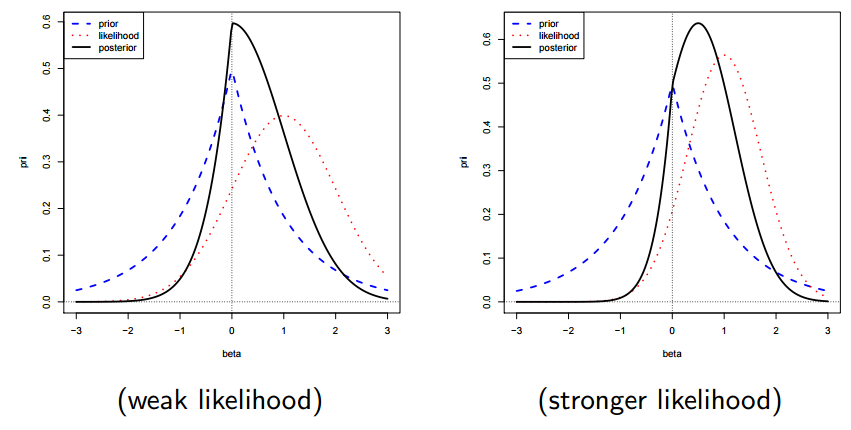 In the figure, the blue dashed line represents the Laplacian prior distribution. The posterior distribution, in solid black, has its mode at 0 on the left with a weak likelihood, while the mode is non-zero on the right with a strong likelihood.

However, the full posterior distribution is not sparse, because if you sample from it you will only rarely get some value close to 0, and in fact because it's a continuous distribution you will never get precisely 0.

In order to achieve sparsity with a lasso approach, you typically need to set some cutoff threshold on the posterior mode. The ideal case is if your posterior mode is equal to 0, but you could relax this and eliminate your variable if its posterior mode is less than 0.2 after taking the absolute value.

Performing this sparsification under lasso gives a particular set of eliminated and retained regressors, which is the "single decision" about which regressors are included or excluded.

A fully Bayesian approach to variable selection, the spike and slab prior, retains uncertainty about which variables should be included or excluded all the way through the model.

So to address your first question:

This is a misunderstanding, since neither method tests all possible subsets of regressors to include.

This is also a misunderstanding, since the computation time is not dominated by brute force testing each possible subset of regressors.

To clarify Scott's point, given some data, if you use a penalized likelihood sparsification approach, you will get exactly one set of included and excluded regressors. But if you use a spike and slab sparsification approach, you have a full posterior distribution for each regressor, each with a separate likelihood of being included or excluded. Some regressors might have a 70% chance of being included, others a 25% chance. This can be preferable in many applications, because given a single dataset we should still have uncertainty over which regressors are important or not.

Intuitively, a spike and slab prior better represents the possible space of included/excluded regressors compared to a penalized likelihood approach like lasso.

I like most of the above answer. My only concern is regarding this: "if you use a spike and slab sparsification approach, you have a full posterior distribution for each regressor, each with a separate likelihood of being included or excluded". If you apply lasso or ridge, you would also have a full posterior distribution. Furthermore, with spike and slab, you would probably also need to apply thresholding in order to fully set regressors to zero, which in effect removes those variables. The main difference is that the spike and slab has a much greater effect in shrinking variables to zero, which makes it more suited to high dimensional settings.

Not the answer you're looking for? Browse other questions tagged r bayesian feature-selection regularization bsts or ask your own question.

3
Is there a default parameter choice for the spike-and-slab prior?
8
Is a spike-and-slab prior a proper prior?
17
Bayesian lasso vs spike and slab
6
Robust methods and penalized regression
6
Gibbs sampling for spike and slab priors
3
lasso with *extended* cox regression (time-varying covariates using counting process notation)
6
Do variable-selection methods (e.g. Elastic Net; Lasso) invalidate theory-based models in fields where little is known?