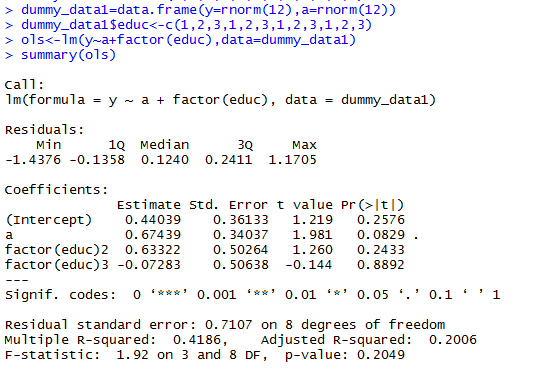 How will I know whether mean response for the categorical variable not represented by dummy in the regression model (1=Elementary Graduate) is significant? How will I quantify it since it does not have coefficient?

I understand that we can change the base category but it always leave the unrepresented category without decision whether its mean response is significant and what its estimated coefficient. How will I interpret the results in the analysis including the baseline variable?

From your post, it seems like you are confused about what actually constitues an effect in your model. Let's say that y stands for income (thousands od dollars), a stands for age and educ stands for education level.

For instance, the effect of the predictor variable a on the response variable y controlling for the effect of educ is estimated as 0.67439. This effect can be interpreted as follows:

The effect of the predictor variable educ on the response variable y controlling for age can be described by a collection of two separate effects, estimated as 0.63322 and -0.07283. Here is the interpretation of these two effects:

(It doesn't make sense that college graduates would earn less than those with an elementary education, but this example is made up.)

As you can see, effects quantify the change in the mean value of the response variable y associated with a change in the values of the predictor variables a and educ. If you don't change the value of educ, you can't really speak of an effect for it.

Well I think you already the know the answer to your question (i.e., "you will not know whether a baseline variable is significant"). The effect for the reference (baseline) category is constrained to be null, and what you estimate with the other dummy variables are relative effects, that is the effect of moving from the reference category to the target one (in your case: Elementary school to High school). This is really important!

Do not re-estimate your model with a different reference/baseline category to obtain an estimate for the initially "missing" effect (in your case: elementary school) - This would not make sense at all!

3
How to calculate the confidence interval of a regression prediction given a particular value for a binary predictor?
3
Effect of Wald-test and collinearity on Logistic Regression model selection
0
Recoding a variable with three levels into a dummy variable
1
Hypothesis Testing with Categorical Variables
2
Setting average as baseline rather than a dummy variable in a glm
1
Loss of significance when changing baseline category in regression
1
Logistic Regression Coefficient Interpretation for more than 2 dummy variables
0
Multiple regression - interpreting interaction effect with dummy IVs