What are good data visualization techniques to compare distributions?

I am writing my PhD thesis and I've realized that I rely excessively in box plots in order to compare distributions. Which other alternatives do you like for achieving this task?

I'd also like to ask if you know any other resource as the R gallery in which I can inspire myself with different ideas on data visualization.

I am going to elaborate my comment, as suggested by @gung. I will also include the violin plot suggested by @Alexander, for completeness. Some of these tools can be used for comparing more than two samples.

After exploring a bit more on your suggestions I found this kind of plot to complement @Procastinator 's answer. It is called 'bee swarm' and is a mixture of box plot with violin plot with the same detail level as scatter plot. 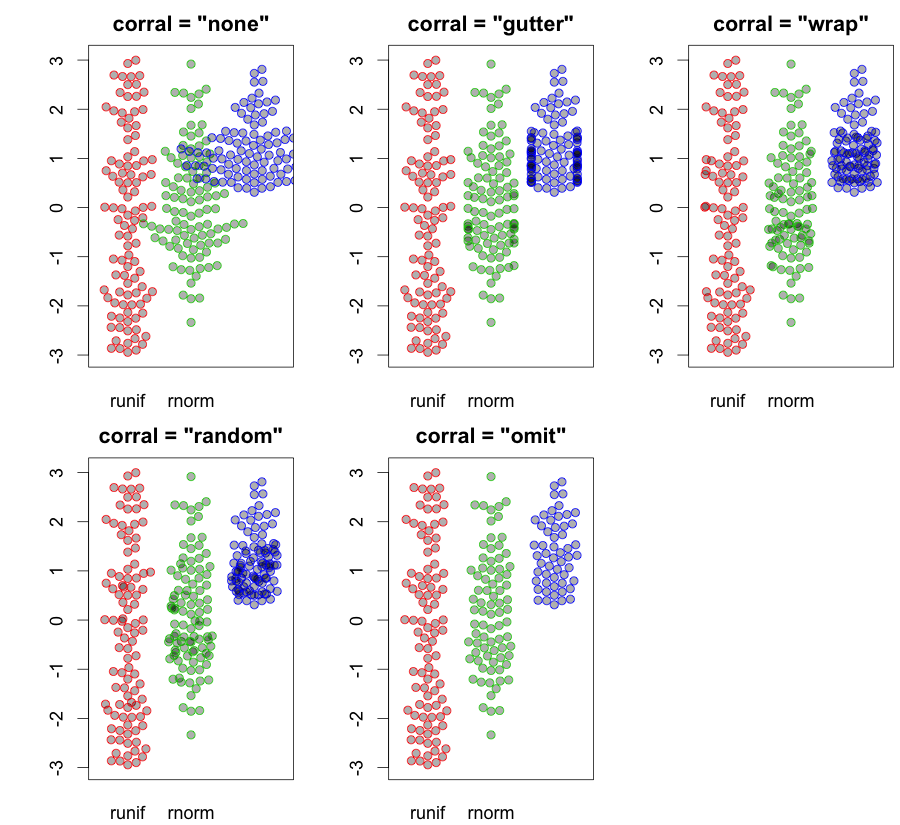 The need for simple formatting beyond R's base package probably explains the popularity of Hadley's ggplot package in R.

Finally, I've found that adding a simple background helps. Which is why I wrote "bgfun" which can be called by panel.first

Lately, I find myself plotting CDFs much more than histograms.

There is a concept specifically for comparing distributions, which ought to be better known: the relative distribution.

Let's say we have random variables $Y_0, Y$ with cumulative distribution functions $F_0, F$ and we want to compare them, using $F_0$ as a reference.

Let us look at an example. The website http://www.math.hope.edu/swanson/data/cellphone.txt gives data on the length of male and female students' last phone call. Let us express the distribution of phone call length for male students, with women students as reference. 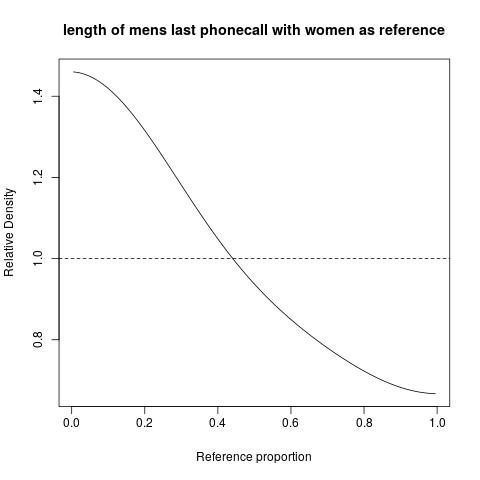 We can also make the same plot with pointwise confidence intervals around the relative density curve: 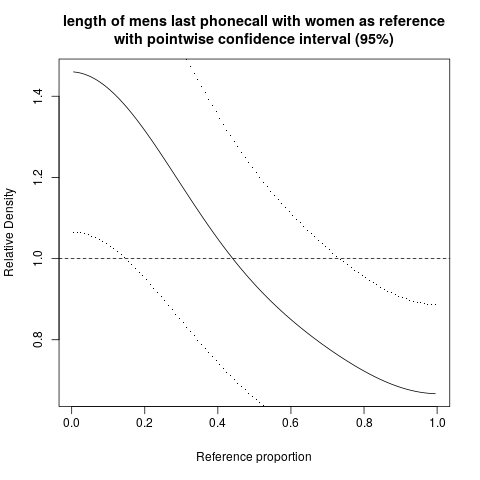 The wide confidence bands in this case reflects the small sample size.

There is a book about this method: Handcock

The R code for the plot is here:

For the last plot change to:

Note that the plots are produced with use of kernel density estimation, with degree of smoothness chosen via gcv (generalized cross validation).

Some more details about the relative density. Let $Q_0$ be the quantile function corresponding to $F_0$. Let $r$ be a quantile of $R$ with $y_r$ the corresponding value on the original measurement scale. Then the relative density can be written as $$ g(r) = \frac{f(Q_0(r))}{f_0(Q_0(r))} $$ or on the original measurement scale as $g(r)=\frac{f(y_r)}{f_0(y_r)}$. This shows that the relative density can be interpreted as a ratio of densities. But, in the first form, with argument $r$, it is also a density in own right, integrating to one over the interval $(0,1)$. That makes it a good starting point for inference.

I like to just estimate the densities and plot them, 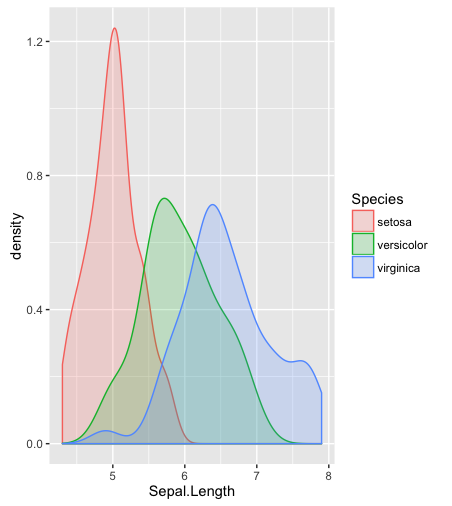 Not the answer you're looking for? Browse other questions tagged r distributions data-visualization boxplot relative-distribution or ask your own question.

17
When is interactive data visualization useful to use?
3
Visualizing a 3D dataset of proportions
3
Testing if two non-normal distributions are significantly different (K-S or Wilcoxon or both?)
2
Best approach in R for interpolating and curve fitting a tiny dataset?
1
Compare distributions (with replicates) and visualization
2
What interesting data manipulations can be done over 70x5 data points in a school context?
0
Best visualization for distributions at multiple time steps
2
Use Effect Size VS p-Value when determining the best fitting distribution?