I have survey data on income and support for environmental protection. Income is a continuous variable that I have broken up into deciles. I have a hypothesis that support for protection ('Agree') will be concentrated not in the very top of the income spectrum, but in the second and third decile. So my question is how should I set the contrasts. In my mind I should compare the value of each decile to the average of all the (other?) deciles? Comparing each decile to the lowest, highest or middle won't capture what I am looking for. Helmert contrasts will get close, I think, but it would compare the first decile to the average of all below it, including the second and third, and I don't think I want that. 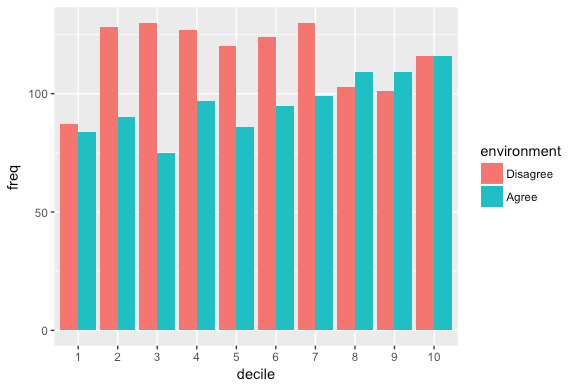 It is seldom a good strategy to bin a continuous variable, see Why should binning be avoided at all costs?. Since you have the original income variable, you could represent it with a spline in a logistic regression model. That ought to give more effective estimation and inference.

For example, in R you could do something like

maybe replacing binomial with quasibinomial or some other family function.

There are alternatives like gam's (generalized additive models). A plot of estimated probability of Agree against Income (or of the estimated spline function) would be instructive. I am less sure about formal inference.

Not the answer you're looking for? Browse other questions tagged r regression categorical-encoding regression-strategies contrasts or ask your own question.

13
Why should binning be avoided at all costs?

39
Simulation of logistic regression power analysis - designed experiments
0
How to choose contrasts for nominal categorical Independent variable so that it results in uncorrelated dummies
33
Degrees of freedom of $\chi^2$ in Hosmer-Lemeshow test
1
Why is it necessary to “ignore” a level when applying sum contrasts?
0
Categorical variable more than two levels