Which statistical test is most appropriate for these data?

I'm trying to design a statistical test that will confirm whether an event x causes another event y. Or more plainly, whether a specific marketing action actually increases telephone calls from potential customers. 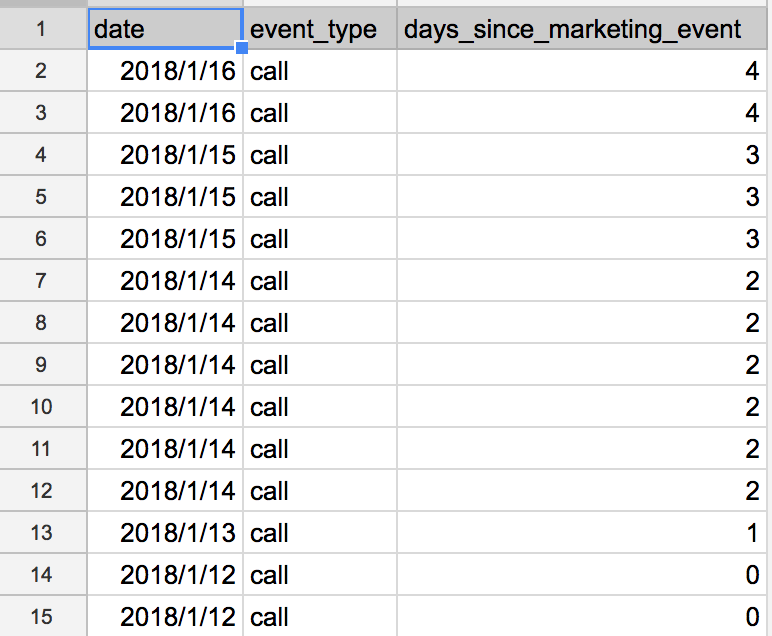 The data contain around 100 data points, each recording a telephone call event (y), the date of the call, and the days since the last marketing event (x).

The set of hypotheses is as follows:

In the full data set (+100 data points) the number of data points in the group (Let's call it group A: 2<=x<=4) is larger than that of the group (group B: 2>x>4). But I need a test to help me be sure that the difference is statistically significant.

I mean I could just look at the two sums of each group (ex. A=65, B=44) but of course that's not convincing or appropriate.

What test would best fit these data?

In the list of data points you provide I see the following:

Now let's look at your null and alternative hypotheses for a moment. You wrote:

$H_0$: Regardless of days since last marketing event, calls do not occur more frequently.

$H_{1}$: Calls occur most frequently between 2 and 4 days since the last marketing event.

But before we rewrite $H_{1}$, let's look at your null hypothesis, which has, if your will pardon my saying so, a funky complex grammatical construction:

Let me suggest (and feel free to write in comments and correct me if I am wrong) that you are trying to express the simple idea no value for days since last marketing call ($x$) is more or less likely than any other value, or put even more simply $x$ has a discrete uniform distribution. This would imply that (assuming $x$ can take only values between 0 and 4, inclusive) that $P(x=2) = \frac{1}{5} = 0.2$ because there are five equally likely values. There are a few ways you could pose a null and alternative hypothesis around this view of your data:

Of course, my reframing of your null hypotheses may not be quite right. For example, perhaps values of $x>4$ are possible? Or perhaps you are interested in testing your empirical PMF versus a theoretical discrete uniform PMF (the one-sample Kolmogorov-Smirnof test may prove useful here)?

Critically: what is the specific question about $x$ you want to answer?

You could do a chi-square test of goodness of fit. This is explained on this page: http://stattrek.org/chi-square-test/goodness-of-fit.aspx?Tutorial=AP

Since the days data are ordinal (4 days is longer than 3 days, etc.) you could also use a Kolmogorov-Smirnov one-sample test.

Categorizing your data (2<=x<=4) needs some theory to support it. Is there a marketing theory that says calls in this region are optimal? If so, you could do a multiple regression analysis with planned contrasts.

I ended up reshaping the data set into that seen below. I realized that there was a bit of redundancy in these data -- repeated information. So on a whim I tried combining the set of data points occurring on the same day into a single data point. This yielded a new variable, essentially a count of the previous data points.

In other words, if six call events happened on a given day, they were then combined into a single data point containing a new variable 'call_count' equal to 6. 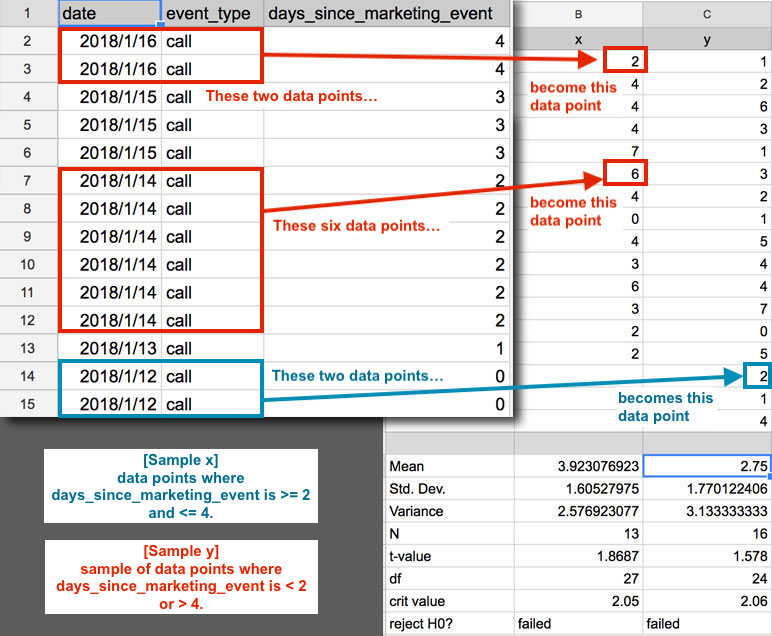 Based on feedback from other users, I also revised my hypotheses to the following:

I chose to perform a t-test and was unable to reject the null hypothesis.

Though I ended up going with a different solution, thanks to everyone who posted the other interesting and helpful answers.

5
Statistical Test for Analyzing Practice Test Data
4
Paired t-test when each data point was repeatedly measured different number of times?
1
Statistical test for logical vectors in R
1
How to test for significance if groups differed at baseline?
1
Which hypothesis test to use to compare two data sets that have a lot of zeros?
2
Measuring Statistically Significant Lift in Weekly Sales (Using T-Test)
1
Which test should I use to determine a relationship between Social media activity and calls booked from activity?