Are there any circumstances where adjusting for path variables / mediators is useful?

I’ve been taught that one of the criteria for being a “confounding” variable is that it should not be a path variable / mediator (ie. not a descendant of, or associated with, the exposure, and is independently associated with the outcome). Adjusting for such a variable would introduce bias.

My question is, are there circumstances where adjusting for these variables be meaningful?

Your intuition is correct, although of course in reality, things are a bit more complex.

Suppose you think the causal graph looks like this: 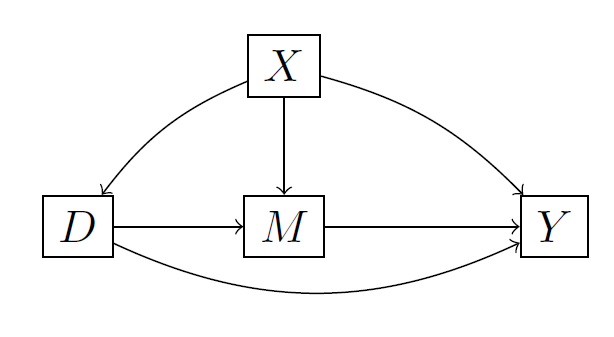 Then you can estimate the average causal effect of $D$ on $Y$ using various methods like regression or matching where you additionally control for $X$, which is a confounder. Technically speaking, this works because $X$ satisfies the back-door criterion: It blocks all "bad paths", blocks no causal paths from $D$ to $Y$, and opens up no new bad paths.

Obviosuly, adjusting for $X$ and $M$ would not give you the causal effect of $D$ on $Y$, because you block the $D \rightarrow M \rightarrow Y$ path. However, in this case, a regression of $Y$ on $D, M, X$ would still give you a reasonable estimate of the controlled direct effect of $D$ when you fix $M$ at some value.

But suppose the world looks like this, where $U$ is unobserved:

In this case, a simple regression of $Y$ on $D$ gives you the causal effect of $D$. What happens when you adjust for $M$? You block the $D \rightarrow M \rightarrow Y$ paths. However, using elementary rules of graphs (d-separation), you also open up the path $D \rightarrow M \leftarrow U \rightarrow Y$. This means that conditional on $M$, $D$ and $Y$ will be correlated. But then this regression is misleading, because the controlled direct effect of $D$ that goes not through $M$ is clearly 0! Unfortunately, unless you measure $U$, there is nothing you can do to find this direct effect, except for randomizing $D$ and $M$.

This is one common and under-appreciated problem in the analysis of mediation. For more, see for example Pearl, Judea. "Interpretation and identification of causal mediation." Psychological methods 19.4 (2014): 459.

Not the answer you're looking for? Browse other questions tagged regression multiple-regression causality mediation confounding or ask your own question.

1
An explanation/definition of negative mediation
0
Setting up a mediation model
3
Connection with propensity score adjustment and latent variable modeling
1
Interpretation of regression results from cross-sectional study after changing the position of outcome, predictor and covariate
0
How do I get path coefficients in mediation model from ADE and ACME (mediation package)?
1
How to control for demographic variables in Path Analysis?
1
Mediation: Significant direct effect but non-significant total effect?
1
Mediation Results Say My Exogenous IV Is the Mediator