What is the difference between dbinom and dnorm in R?

I'm a huge newbie when it comes to statistics and R.

I'm trying to make sense of all of these functions as someone who hasn't taken statistics before.

As you can probably tell, there are a lot of things I'm confused about.

Firstly, can a probability density function only return a non-zero probability if the data is discrete?

pbinom is the cummumative version of the probability density function, correct? If the data is continuous, I would use the cumumlative function, right?

And now for the big question, what the hell is the difference between dbinom/pbinom and dnorm/pnorm?

From my understanding, pbinom gives you that probability that I first mentioned. You enter an number of successes, number of trails, and probability of succes, and it returns a probability. However, with dnorm, I don't understand what it is I enter. I know that I enter an x (which presumably also represents a number of successes), as well as a mean and a standard deviation. I also know that it does this for a normal distribution. What I don't understand is, why doesn't it ask for a probability, or a number of trails. Why does the x axis have negative values this time? What does it even return? Shoudn't it return 0 since presumably its not discrete? I know that it actually returns the calculation from the equation (the one with the standard deviation and mean), but I don't know what the equation really even represents.

Am I even making sense? I feel like I'm just spewing gibberish at this point.

Can someone set me on the right track, because I legitimately feel lost in all these terms, equations, and functions.

Any help is greatly appreciated. Thank you.

And now for the big question, what the hell is the difference between dbinom/pbinom and dnorm/pnorm?

Kudos at learning this material separate from having taking a statistics (¿or probability?) course.  There is a lot to unpack here, and it may be better to do some external reading, but I will start with an explanation of dnorm vs pnorm.

In R, dnorm() draws the curve that we will use to calculate our probabilities.  This is the conventional normal curve with which most people are familiar.  To calculate a probability, we are actually calculating an area.  In particular, we are going to cut a vertical line through this curve, shade the area under the curve to the left of the vertical line, and this is the probability value.

Regarding your query about have a zero probability for a value with a continuous distribution...you are on the right track.  Using a little bit of limits, if you have pnorm(2) - pnorm(1.5), this is the area under the curve from $x=1.5$ to $x=2$.  If you start to move $x=1.5$ closer to 2, this area becomes zero.

Note, I have omitted more technical terms like density function and cumulative probability distribution, but I think a more general picture may help here.

You could try to draw them for illustration: 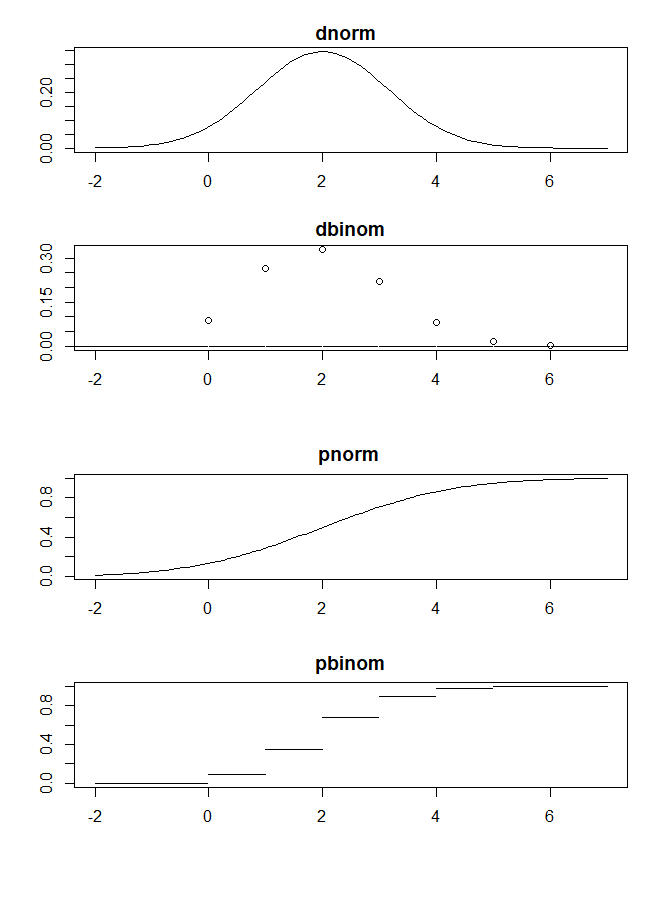 151
Can a probability distribution value exceeding 1 be OK?

4
How to interpret the results of the R pnorm and analogous functions?
7
Probability density function between -1 and 1?
17
Difference between multivariate standard normal distribution and Gaussian copula
2
Using Poisson distribution to generate random integers
16
What exactly is a distribution?
1
what does the length of each bar represents, in the context of discrete uniform distribution?
2
Confused about Probability Density Function and Cumulative Density Function?