I have the following code, which basically try to predict the Species from iris data using randomForest. What I'm really intersed in is to find what are the best features (variable) that explain the species classification. I found the package randomForestExplainer is the best to serve the purpose.

The result of the code produce this plot: 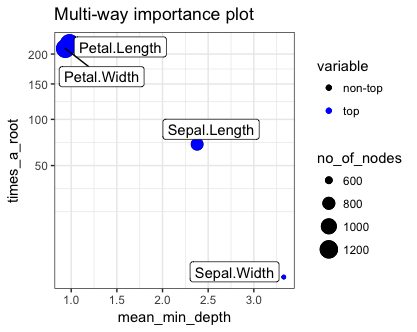 Based on the plot, the key factor to explain why Petal.Length and Petal.Width is the best factor are these (the explanation is based on the vignette):

It's not entirely clear to me why the high times_a_root and no_of_nodes is better? And low mean_min_depth is better?

What are the intuitive explanation for that?

no_of_nodes is distinct from the other two. Picture the dependent variable being a strong sinusoidal function of one predictor. The predictor will not necessarily appear as being important on the previous two metrics because of the lack of a clear trend/direction/non-zero linear slope in a bivariate plot. However, eventually the trees will start to split on this predictor, and will then continue to split on it a very large number of times to approximate the sinusoidal function.no_of_nodes will capture the importance of this and (I suspect) other nonlinear predictors (without a clear trend/direction/non-zero linear slope) better than the earlier metrics.

That said, I think that accuracy_decrease (for classification) and mse_increase (for regression) are far better metrics of importance than the rest. They measure the decrease in the forest's predictive performance if a particular predictor is permuted. Correlated predictors will influence this, but they will also affect the other importance metrics as well. And whether that matters depends on what your goals for the analysis are.

Not the answer you're looking for? Browse other questions tagged r machine-learning random-forest or ask your own question.

15
Why does the random forest OOB estimate of error improve when the number of features selected are decreased?

15
RandomForest - MDS plot interpretation
1
How to calculate variable importance taking correlated predictors into account?
6
Random jungle - why was the algorithm/tool abandoned in general but not by Microsoft?
1
Model selection: Two-Part Mixed Effects Model for Semi-Continuous Data