What is the probability that 6 of the last 25 Super Bowl winning teams had a All-Pro Quarterback by chance?

Question: what is the probability that these six QBs were picked at random?

Here's a simulation-based answer in R$^1$. Since this is for educational/instructional purposes, I did not program this as efficiently as it could have been; I instead tried to make it more human-readable.

First, I'm going create reference vectors we are going to use. Both are length of 32. One of the entries is TRUE for won_superbowl, since only one team wins the championship each year. Six of the entries are TRUE for probowl_qb, since exactly 6 quarterbacks are selected to the Pro Bowl, and only one quarterback can win per team.

I am going to set up the simulation now. I'm doing 10,000 simulations of a 25 year span. I set a seed so that the results are reproducible by anyone else.

Now, I run the simulation. For each simulation/year combination, I randomly rearrange the probowl_qb vector. Since I randomly reorder this vector, it is baked-in that having a Pro Bowl quarterback is independent of winning the Super Bowl. Then, I check to see if the team that won the Super Bowl has a TRUE value for probowl_qb. I sum up each of these for the 25 years, since TRUE is treated as 1 in R, while FALSE is treated as 0

We can examine a histogram of the results, and it looks like it follows a Poisson distribution with an expected value of perhaps 4 or 5: 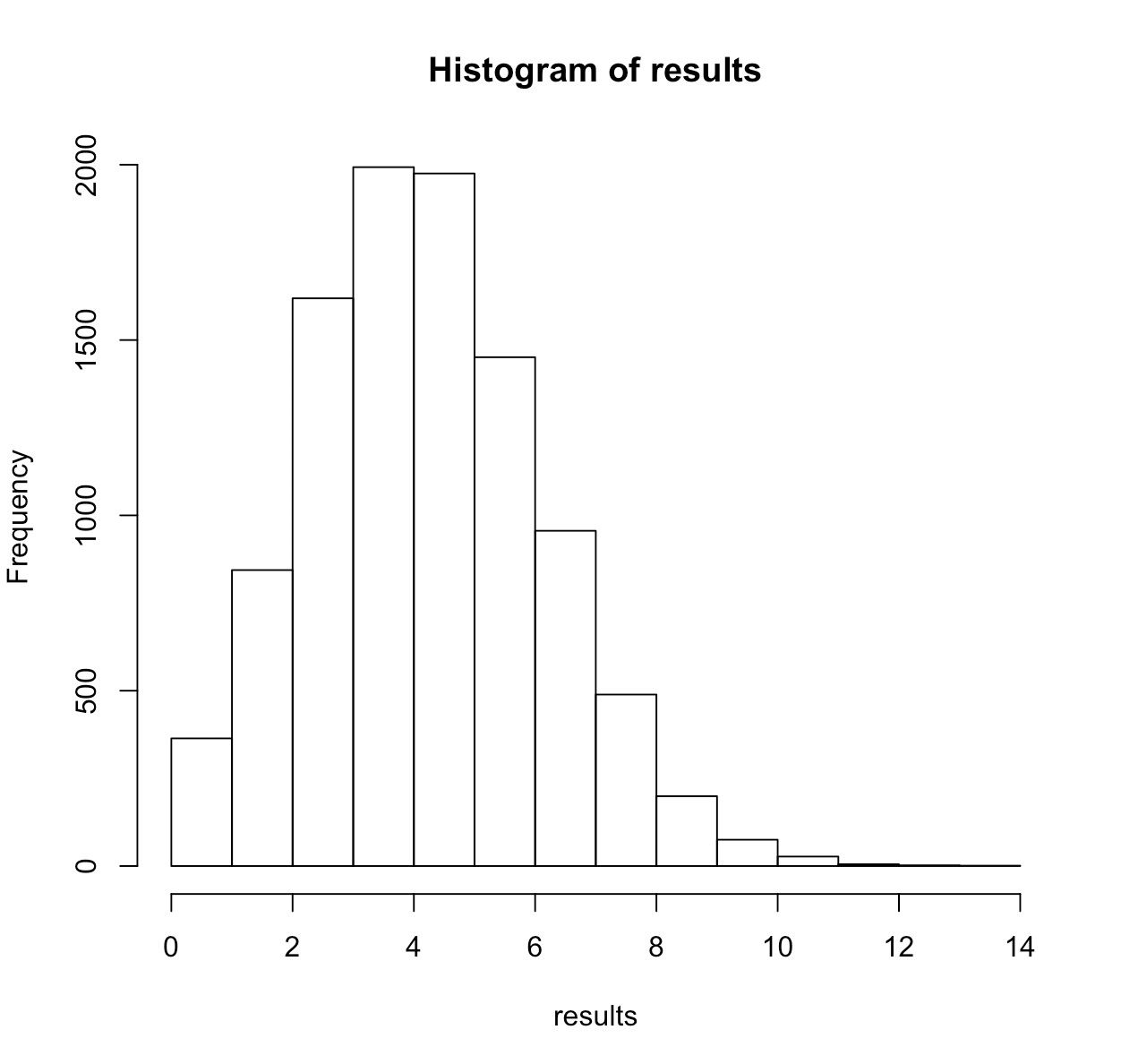 We can then look at what some people call Monte Carlo p-values, because this is a computationally-derived p-value. What is the probability, given that the null hypothesis is true (e.g., Pro Bowl selection completely unrelated to winning Super Bowl), that we observe exactly 6 Pro Bowl quarterbacks also being on the team that won the Super Bowl?

About 14.5%. How about greater than or equal to 6? This is the p-value, since it is the probability, given the null hypothesis, that we observe our data—or more extreme data.

About 32.1%. This means that, if there was no relationship between Super Bowl winning and Pro Bowl QB selection, we would expect to see the results we saw (or more extreme results) about 32.1% of the time (actually quite plausible). Note that this is not the probability of it being randomly generated—you'd need the Bayesian flip for that (involving prior probabilities and whatnot, as @whuber mentions in the comments).

Following from your comments, what you could do from here is change out the amount of TRUEs in the probowl_qb to be more or less, depending on if the position is WR, RB, TE, LB, K, etc., and compare these values across position. I'm imagining that you are trying to say that QB selection to Pro Bowl is more highly correlated to winning the Super Bowl than is being another position. You could actually create a row for every team over every year, and have a variable for if any QBs where in the Pro Bowl, any TEs, etc., and then another variable for if they won the Super Bowl or not. You could do some type of multilevel Poisson model to see if (a) there is a significant relationship between Pro Bowl selection and winning the Super Bowl and (b) if this slope is significantly different for each position.

Part of the reason we might be seeing a lower relationship here than expected is that (a) Pro Bowl voting is done before the playoffs start and (b) football playoffs are an n = 1 trial, meaning that more upsets occur than in other sports like basketball because the sample size is smaller. You might get better power for the test you seem to be interested in (based on the comments) if you were to look at if the team was the favorite to win the Super Bowl by the same type of people that vote for the Pro Bowl and at the same time they are voting—that might give a better indication that people reward the QB for success more than other positions.

4
Predicting raffle winners
5
Calculating Total Probabilities from a Poisson Random Variable
1
Question on Probability & Distribution
5
Statistics of 7 game playoff series
0
What is the likelihood that the first of N unlikely steps occurs in the first 1/Nth of the total time, given that all N steps succeed?
2
How likely is it that this distribution is random?