Can I remove a dummy variable when it is not significant by itself, but its interaction with another variable is?

I have the following model based on the financial returns of a company as a dependent variable of a stock market index, and a dummy variable interacting with USD exchange rates to my currency. The dependent variable and the stock index returns are in log.

The dummy variable is basically 0 before my country switched our exchange rates to floating in 1999 (exchange rates used to be fixed by the government) and 1 afterwards. 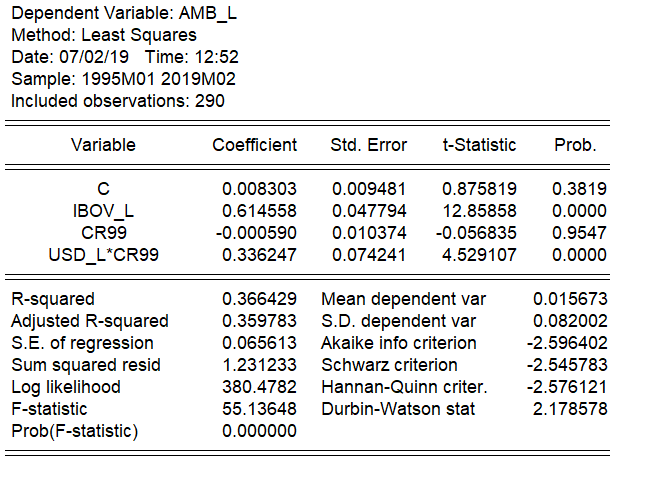 Where IBOV_L is the stock index and CR99 is the dummy variable.

My question is: can I remove the "standalone" dummy variable and leave only the interaction in my model? Because the p-value is very insignificant.

Also, I can't run the chow stability test if I don't remove it, I get an error saying something about "singular matrix". Is it ok to use a dummy variable interacting with the exchange rates in the model but not the exchange rates and the dummy by themselves?

In other words, is the model below ok? Does it make sense? 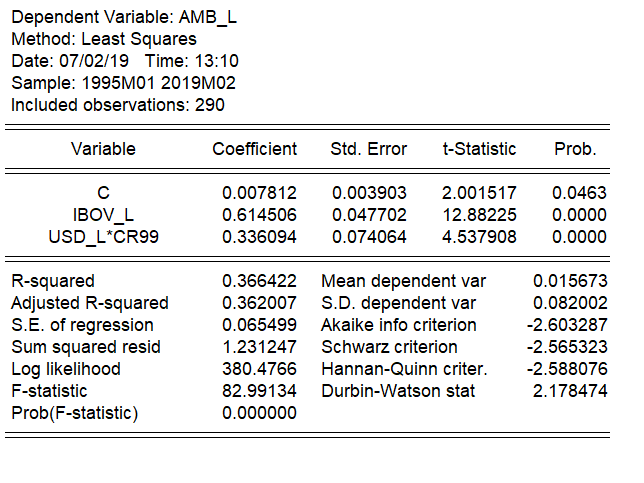 This is probably a silly question but I'm just beginning studying this.

Both of these information criteria work like a golf score: lower numbers are better and the numbers are somewhat arbitrary units that are only comparable if the two people you are comparing were playing on the same golf course. Lower AIC and BIC values are better and you can only compare models which analyzed the EXACT same dataset. AIC is more liberal and BIC is fairly conservative and penalizes models with higher complexity more than AIC. A meaningful change in AIC or BIC score is about 8. For example, if a model has and AIC of 3440 and another model of the same data has and AIC of 3432, the second model would be considered by most to be a model that better fits the data and, thus, is more accurate.

edit: If the variable was not treated as a factor in your previous analyses, your coefficient estimates and significance values may change.

Not the answer you're looking for? Browse other questions tagged econometrics interaction interpretation finance categorical-encoding or ask your own question.

0
Determining which stocks fall first in a stock market crash
0
Split v. Interaction Significance
0
Why is my interaction term significantly negative when its constituents are both significantly positive?
1
How to interpret the relationship between two growth rate variables (i.e. changes between time points)?
1
Statistics / Regression Question
0
Coefficient Interpretation when dependent and independent variables are percentages
2
Is a least squares linear model useless if it has significant breakpoints?