I am trying to solve this problem on and off for the past couple of months but to no success. This was supposed to be a very small part of my PhD thesis in navigation but I guess I underestimated the problem. It sounded trivial at the beginning, but now I am not so sure.

Lets say we have two ships, each with its own nominal position in 2D coordinates (mean). Due to errors in positioning systems we can only be certain that the ships are within 1 mile of the mean with 95% probability (normal distribution). Given these 2 positions and this probability distribution, what is the probability that the ships are within 5 miles from each other? Also, same question if the ship's probable position is an ellipse, not a circle.

I asked some people and they told me that there are no analytic solutions. If that is really the case, please explain how to solve it numerically.

As you can already tell, I come from engineering background, therefore my math is more than a bit rusty.

I apologize in advance if the question is too vague or too trivial for this forum. I will be more than happy to explain in more detail if needed.

I found this, but it is only for univariate case, and besides I don't know how to implement it in my case where I need to find the probability that the distance between two ships is less than 5 miles.

I imagine this problem as a plane with two hills that intersect and the solution is the volume under the circle with diameter of 5 miles that is located somewhere between the two peaks of hills (means).

Am I on the right track?

The problem is not trivial, but obtaining a solution is straightforward. Exact analytical expressions for the distribution of the inter-ship distance can be found (in terms of Bessel functions): it is the square root of a scaled non-central chi-squared variate. Provided the ships are far apart compared to the standard deviation of the position estimates, formulas for the mean and variance of this distribution provide an excellent Normal approximation. This can be used to develop either confidence intervals or a posterior distribution for the distance.

The data that I have is 2 pairs of x,y coordinates that mark the estimated positions of 2 ships. Also, positional errors are bivariate normal with 95% probability of ship's actual position being within 1 mile of the expected position.

It will be convenient to obtain conventional parameters of the positional errors. A bivariate normal distribution with no correlation and variances of $\sigma^2$ for each of the coordinates has a total probability of $1 - \exp(-x^2/(2\sigma^2))$ within a distance $x$ of its mean. Letting $x$ be one mile and setting this expression to $0.95$ determines $\sigma^2$. In general, when the probability is $1-\alpha$ ($\alpha=0.05$ here) at a radius of $x$, then

Consequently, $D$ itself could be called a (scaled) "noncentral $\chi$ distribution." 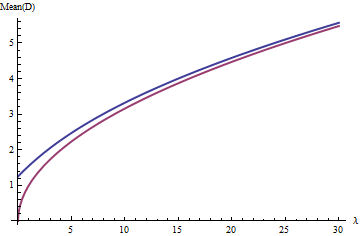 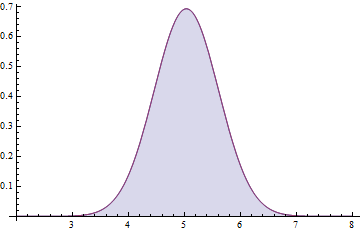 Either method is easy and straightforward when the Normal approximation to the distribution of $D$ is good. Both require some heavy computation otherwise--but that is perhaps a discussion for another day.

I'm not sure how much this will help you but I hope it gives some pointers.

Here is a Mathematica function which computes the probability under the distributions for a circle of radius separation/2 for two ships with a normal distribution of position with variance 0.2. A variance of 0.2 is close to the 95% certainly level.

The probability distribution of position for two ships 5 miles apart with a 95% confidence of being within one mile of reported position. 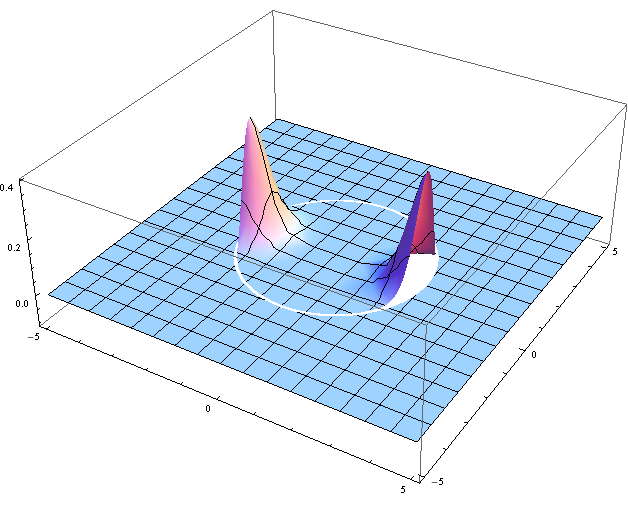 For a range of 5 miles, the calculated value is

Here is the probability of proximity over a range of distances: 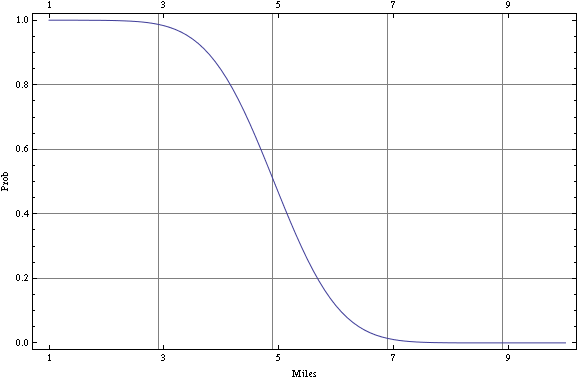 I've thrown up a simulation with R with increasing dimension in response to Erik's answer. This code also answers the question, by providing a numerical solution (when fixing the dimension to 2) to a special case which can be easily generalized (though it's not very efficient).

Erik proposed to look at the problem as a one-dimensional problem by choosing a coordinate system, which lies on the lines connecting the two ships. This can't work, as with increasing dimension, the probability being close decreases.

I'm sampling from two $d$-dimensional Gaussians with means $(1,0,\dots)$ and $(0,0,\dots)$. Covariance is the identity matrix. The code plots the frequency of the points being within 1 of each other (euclidean distance) and uses 1000 samples for each dimension.

Using simulation you can easily model ellipses simply by adjusting the covariance matrix (what my code doesn't allow, since I don't use a library for sampling from gaussians). 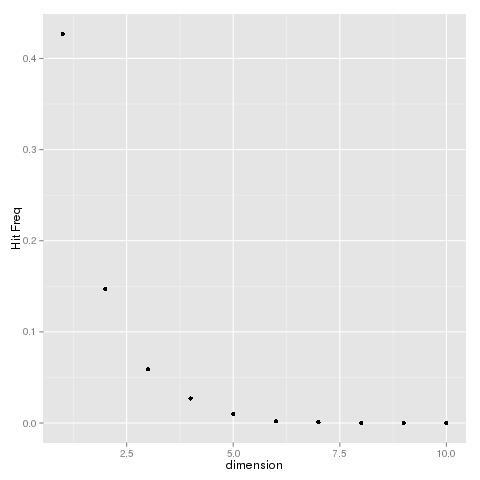 Not the answer you're looking for? Browse other questions tagged probability normal-distribution density-function bivariate or ask your own question.