I am doing a random-effects meta-analysis where the variable is measured in standardized mean differences. The actual measures vary, but are related to drug use in rats and control vs. treatment. I used SMD because the measures vary in scale.

For the forest plot, I am considering how to scale the size of the boxes for each study and for the overall effect.

Is there a current best practice?

What are the pros and cons of each of the above (or any others)?

How to scale the squares in a forest plot?

I'd argue for scaling the size (area) of the squares proportional to the weight that the study contributed to the meta-analysis. By scaling by weight, the area of the square is a direct visual cue of the relative impact a study had on the summary effect. The weight is among other things proportional to the standard error (precision) which, in turn, is usually (but not always!) directly related to the study sample size. This makes the most sense to me because the forest plot is a visual display of a statistical analysis which, in effect, is a weighted mean. Scaling by quality seems problematic to me because quality is difficult to measure objectively and the summary effect is not calculated using "quality-weights" (at least I've never seen it).

This seems to be supported by a number of authors. Steff Lewis and Mike Clarke$^{[1]}$ go into the history of the forest plot and write

The area of each square was proportional to the weight that the individual study contributed to the meta­ analysis.

Michael Borenstein et al.$^{[2]}$ recommend the same when they explain

[...] the point is a box, proportional (in area) to that study’s weight in the analysis.

This is again mirrored in Jonathan Sterne's book$^{[3]}$:

The size of the plotting symbol for the point estimate in each study is proportional to the weight that each trial contributes in the meta-analysis.

Lastly, in The Handbook of Research Synthesis and Meta-Analysis$^{[4]}$ we read

In this plot, each study is represented by a square, bounded on either side by a confidence interval. The location of each square on the horizontal axis represents the effect size for that study. The confidence interval represents the precision with which the effect size has been estimated, and the size of each square is proportional to the weight that will be assigned to the study when computing the combined effect.

Estimators of between-study variance: Which one to use?

The metafor package for R offers no less than nine different estimators for the amount of heterogeneity:

Descriptions of these estimators can be found in references $[4, 5, 6, 7, 8]$. The question remains which one to use? Veroniki et al.$^{[7]}$ and Langan et al.$^{[8]}$ recommend the Paule-Mandel estimator or restricted maximum likelihood based on simulation studies. A never publication by Langan et al.$^{[9]}$ made the following recommendations: 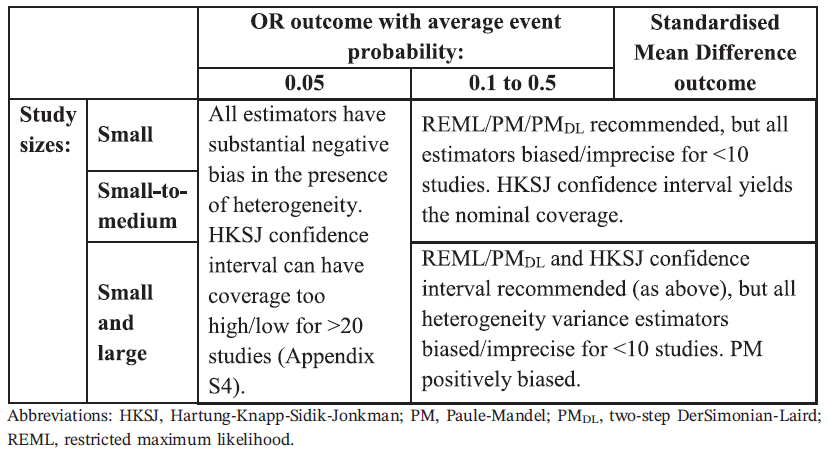 Not the answer you're looking for? Browse other questions tagged meta-analysis forest-plot or ask your own question.

2
What estimator to use in random effects model?