Why does component-wise median not make sense in higher dimensions?

According to this book, this is not a good idea, because the one-dimensional concept of the median does not simply extend element-wise to higher dimensions.

Why is this? Can anybody provide an example of a case where this approach fails and gives a nonsense result?

I understand that this higher-dimensional median is not necessarily an element of the point set, but it still has the properties of being a meaningful measure of location and being robust to outliers.

The underlying concept is that a median splits the data (or a distribution) into two halves with equal amounts in each half (by count or probability).

Even in one dimension the median is problematic. When clustering occurs, one cluster of values may be near $x_0$ and another cluster near $x_1,$ far from $x_0.$ Slight changes in the amount of data (or probability) can shift the median from one cluster to the other. But, at the least, a median can always be located close to some data values or probability support. Therefore we shouldn't complain about multidimensional examples of the same phenomenon.

The fundamental problem is that the point whose coordinates are the marginal medians can be located unreasonably far from any data values (or probability).

Here's an extreme example in three dimensions. Consider a nine-element dataset consisting of one value near $(1,0,0),$ two values near $(0,1,0),$ and three values each near $(0,0,1)$ and $(1,1,1).$ Such data often arise when the values are proportions: in such cases anything outside the cube is meaningless and values near the corners (as in this dataset) are extreme.

These data are located near four corners of the unit cube: 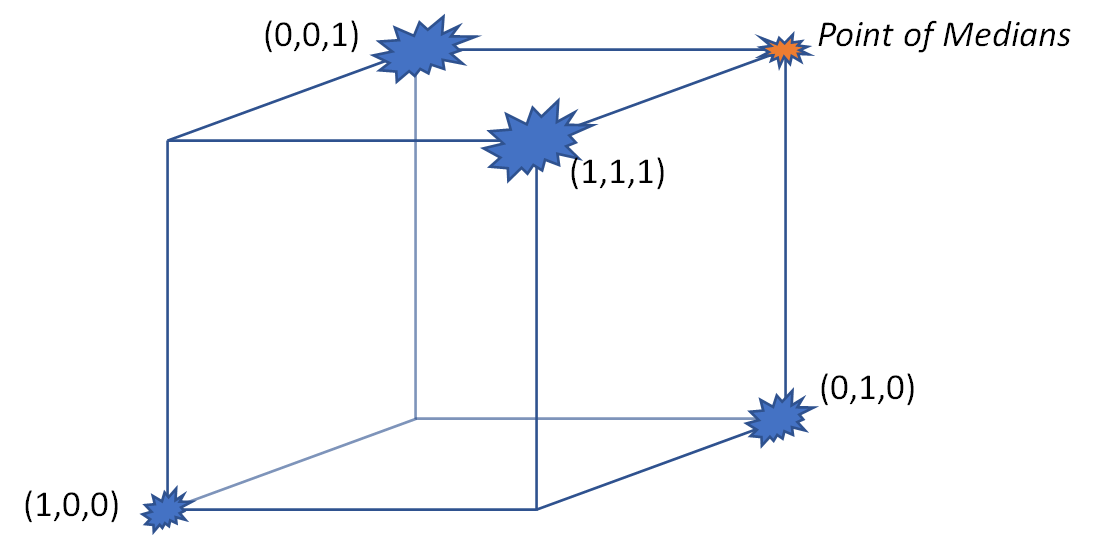 The blue starbursts indicate the data locations. Their sizes reflect the amount of data at each location: you can see there is a preponderance of values in the back, to the right, and at the top.

You can check that the medians of the coordinates in this dataset are near $0,$ $1,$ and $1,$ respectively. For instance, four of the nine values of the first coordinate equal $1$ and the other five are near $0,$ putting their median near $0.$

Consequently, the point of marginal medians is $(0,1,1).$ But this isn't anywhere near any of the data--indeed, it's about as far from any of them as one can possibly get. We would struggle to interpret such a "median" as the center of anything. All the data lie (relatively far) to one side of it.

For alternative approaches, please see our thread on multivariate generalizations of the median.

Not the answer you're looking for? Browse other questions tagged multivariate-analysis median or ask your own question.

38
Is there an accepted definition for the median of a sample on the plane, or higher ordered spaces?

98
What is the best way to identify outliers in multivariate data?
2
How do I sort an ordinal list of user-generated ratings data?
2
How much sense does median of one number make?
0
Adaptable outlier classification
0
Why is this method not Robust to Outlier in Multivariate Median Calculation
3
Comparison of distribution mean or median
1
Standardized median estimation
4
What does a shift-in-location-only entail?