This is a very basic question about Bayesian inference. I'm not grasping one or more fundamental concepts.

Let's say I have two observed outcomes, X and Y. I want to infer the probabilities (px and py, respectively) of each occurring given X and Y. I do not know N, the total number of trials. I'm assuming that X and Y are binomially distributed. How do I calculate the likelihood without N?

What I ultimately want is to show the bivariate posterior distribution of px and py via MCMC. I do not care about estimating N--I just want to show the chain in the plane of px and py. No convergence necessary.

Clarification: X and Y are drawn from the same N: X ~Binom(N, px) and Y ~Binom(N, py). We have no other information about px or py, although I'll use a beta prior to start. Also assume that X and Y are independent.

So I did some analysis in Python, though I used the pyMC library which hides all the MCMC mathy stuff. I'll show you how I modeled it in semi-pseudocode, and the results.

I assumed that $N$ has a Poisson prior, with the Poisson's rate a $EXP(1)$. This is a pretty fair prior. Though I could have chosen some uniform distribution on some interval:

And I combine it all:

Then I perform the MCMC over 50000 samples, burned-in about half of that. Below are the plots I generated after MCMC.

Let's examine the first graph for $N$. The N Trace graph are the samples, in order, I generated from the posterior distribution. The N acorr graph is the auto-correlation between samples. Perhaps there is still too much auto-correlation, and I should burn-in more. Finally, N-hist is the histogram of posterior samples. It looks like the mean is 13. Notice too that no samples were drawn from below 10. This is a good sign, as that would be impossible given the data observed was 5 and 10.

Similar observations can be made for the $pX$ and $pY$ graphs. 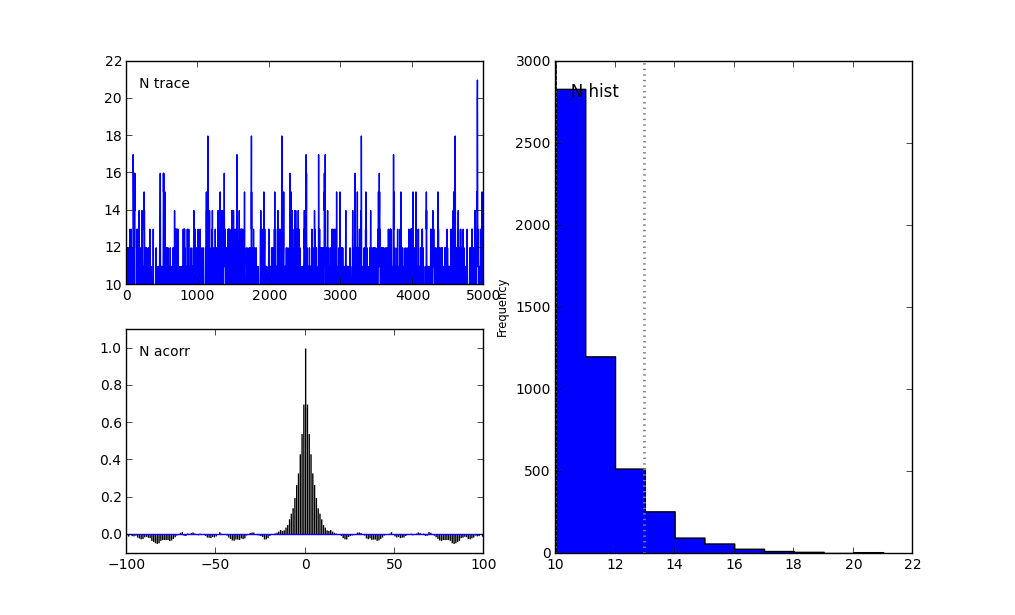 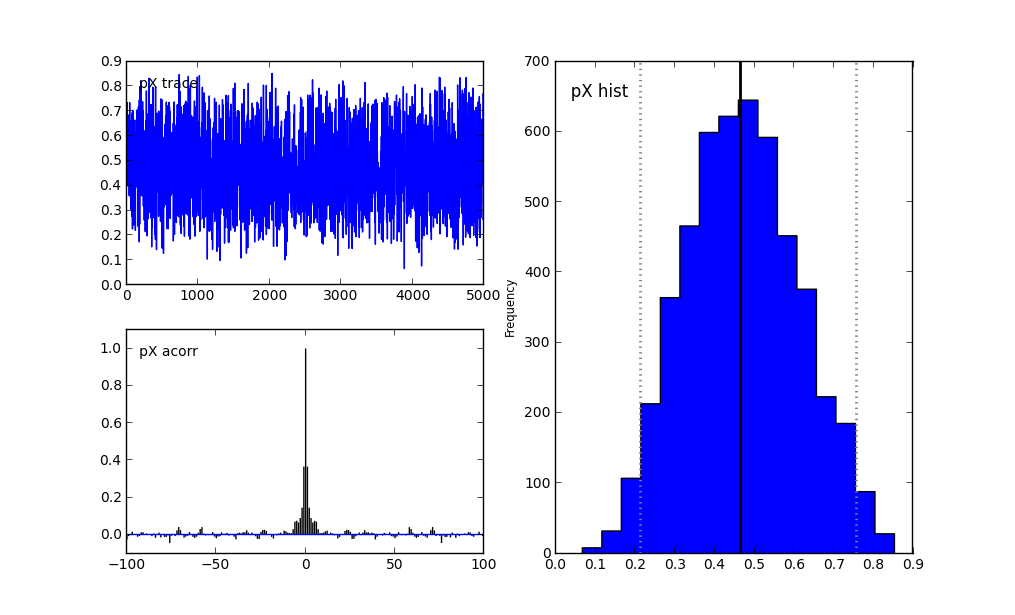 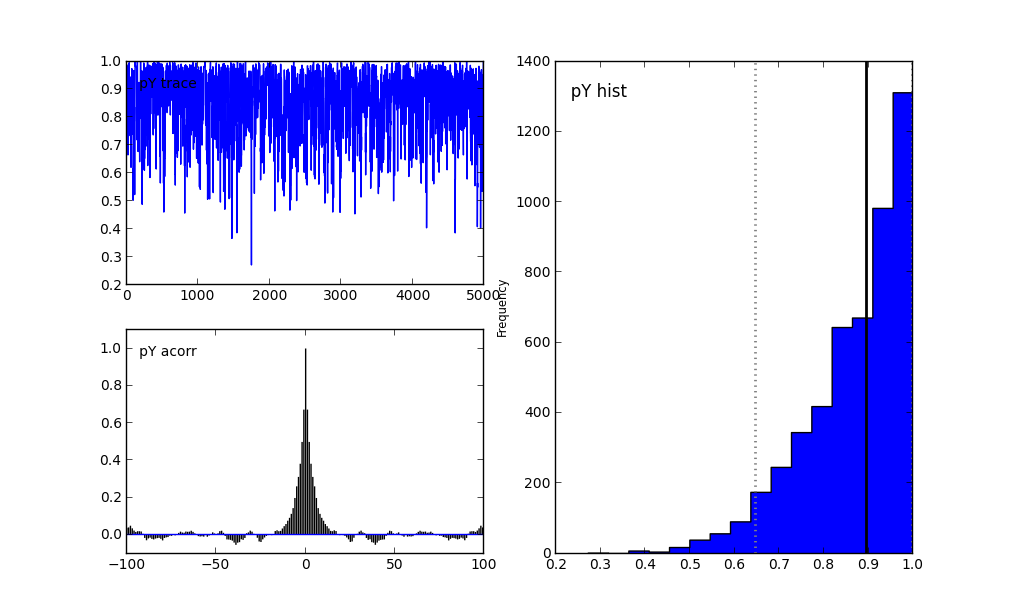 Different Prior on $N$

If we restrict $N$ to be a Poisson( 20 ) random variable (and remove the Exponential heirarchy), we get different results. This is an important consideration, and reveals that the prior can make a large difference. See the plots below. Note the time to convergence was much larger here too.

On the other hand, using a Poisson( 10 ) prior produced similar results to the Exp. rate prior. 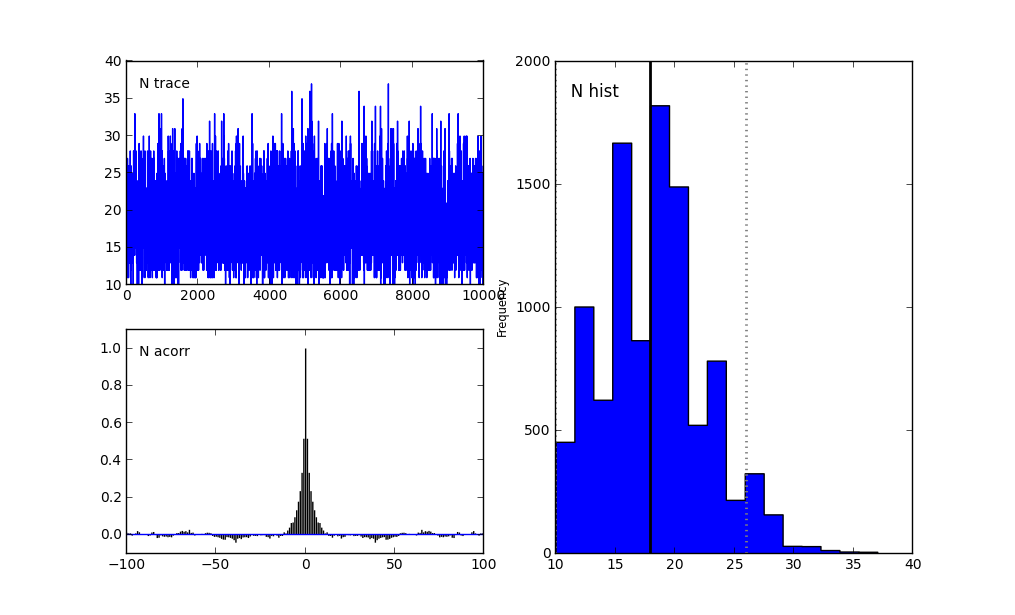 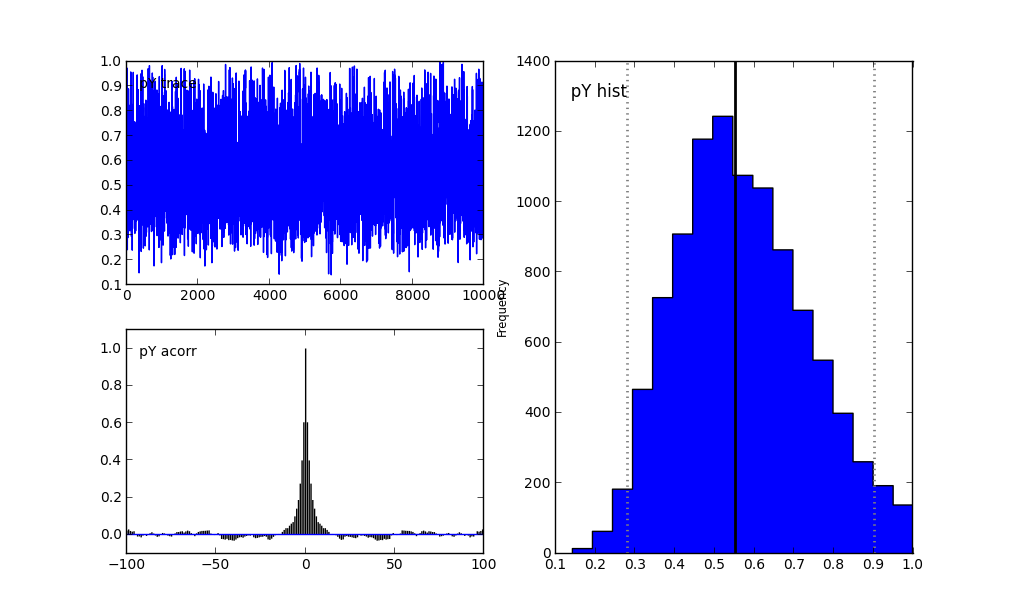 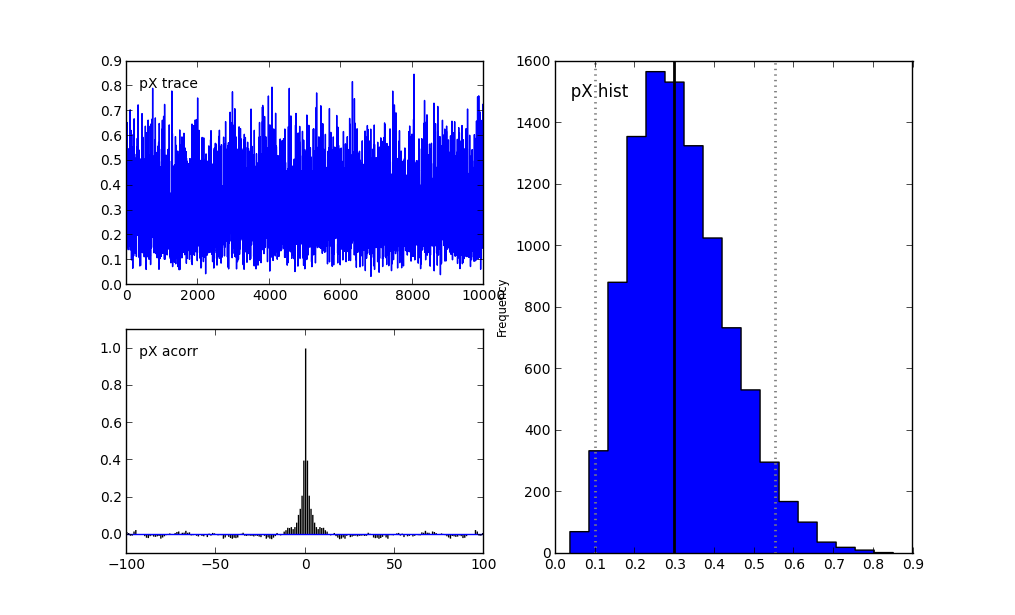 Not the answer you're looking for? Browse other questions tagged bayesian binomial-distribution markov-chain-montecarlo or ask your own question.

21
Why should we care about rapid mixing in MCMC chains?
14
Probability of a run of k successes in a sequence of n Bernoulli trials
1
MCMC autocorrelation convergence diagnostic
10
Number of Markov chain Monte Carlo Samples
12
MCMC; Can we be sure that we have a ''pure'' and ''large enough'' sample from the posterior? How can it work if we are not?
1
MCMC convergence
0
How to quantify the confidence intervals of the ratio of two binomial probabilities of getting exactly k successes in n trials
3
MCMC - one chain behaving differently