The Monty Hall paradox is well known, even in this site there are several discussion about it (for example: How can I apply Monty Hall problem correctly? ; Monty hall problem, getting different probabilities using different formulas? ), however my point here is a bit different.

One of the most important point of causal inference, at least as presented in Pearl (and colleagues) literature’s, is that standard statistical tools are adequate for passive observation but not for intervention. The last is the core of causality, therefore standard statistical tools cannot face properly causal issues. For example we cannot deal with intervention by standard conditioning; tools as do-operator was proposed ad hoc.

Now in the Monty Hall problem, intervention appear; indeed the problem is precisely to evaluate one probability/choice after the host intervention. However one solution, probably the more shared, invoke precisely the standard conditioning tool and it seems work. Read here: https://en.wikipedia.org/wiki/Monty_Hall_problem#Solutions_using_conditional_probability_and_other_solutions or even the solutions proposed in the discussions suggested above.

However this fact seems me in contrast with the main argument of causal inference. It is so? If yes, because it seems work? What is the solution proposed in causal inference?

The problem with this situation is that this Monty Hall problem is not an example of inference.

When you roll a dice or have some other sort of gamble (with known parameters that describe the sample distribution) then it is just a problem relating to probability theory and it has not to do with statistical inference or causal inference. 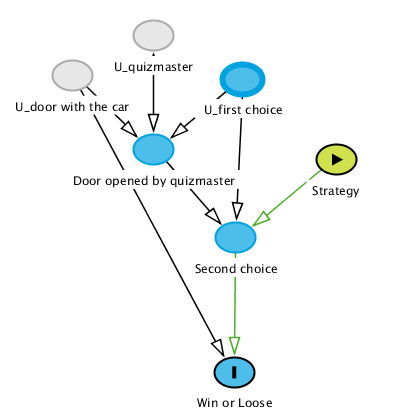 There's some variables that are functions of others

The Monty Hall problem is to compute whether the strategy of switching is a good strategy.

So the intervention is not the quizmaster, but it is the strategy. The computation, the solution, is eventually the old fashioned statistics giving $$P(\text{success $| do($strategy$=$switch$)$}) = 2/3$$ and $$P(\text{success $| do($strategy$=$no switch$)$}) = 1/3$$ The causal inference is not really doing anything here to solve the Monty Hall problem. What it does is giving us a method to describe the structure of relationships and determine whether statistical correlations between outcome probabilities $P(\text{success})$ and interventions $\text{$do($strategy$=$no switch$)$}$ can be interpreted causally.

That is a very interesting question. My two cents:

Intervention as defined by Pearl and others means altering the causal DAG by removing an arrow --- i.e., removing the direct effect of a variable A on a variable B --- and setting the value of B "manually" so to speak.

In the Monty Hall problem, you say the host intervenes; I disagree. When the host opens the door to show the goat, I don't see any variables being manually set in the causal DAG.

Anyway, what would be the causal DAG for the Monty Hall problem?

I haven't built it, so this is just speculating, but this is what came to mind when I read your question:

When the host opens the door, the only variable I see him intervening on is the contestant's belief of which door has the car, but I think this variable would not appear in the DAG I would draw.

In short: the host's intervention is on the epistemic state of the contestant, and only if we include this state as a node in the causal DAG can we talk about causal issues here.

It would be interesting to hear other opinions.

I discovered that this story is used also in: CAUSAL INFERENCE IN STATISTICS A Primer - Pearl Glymour and Jewell (2016). Monty Hall problem can be addressed in both ways: purely statistical and causal one.

Authors deal with Monty Hall problem with standard conditioning and related Bayes rule. Indeed at pag 14 it is said that:

Another informative example of Bayes’ rule in action is the Monty Hall problem, a classic brain teaser in statistics. In the problem, you are a contestant on a game show, hosted by Monty Hall. Monty shows you three doors—A, B, and C—behind one and only one of which is a new car. (The other two doors have goats.) If you guess correctly, the car is yours; otherwise, you get a goat. You guess A at random. Monty, who is forbidden from revealing where the car is, then opens Door C, which, of course, has a goat behind it. He tells you that you can now switch to Door B, or stick with Door A. Whichever you pick, you’ll get what’s behind it. Are you better off opening Door A, or switching to Door B?

We can prove this surprising fact using Bayes’ rule. Here we have three variables: X, the door chosen by the player; Y, the door behind which the car is hidden; and Z, the door which the host opens. X, Y, and Z can all take the values A, B, or C.

In the text the solution is not outlined but I find it in this webpage http://bayes.cs.ucla.edu/PRIMER/ 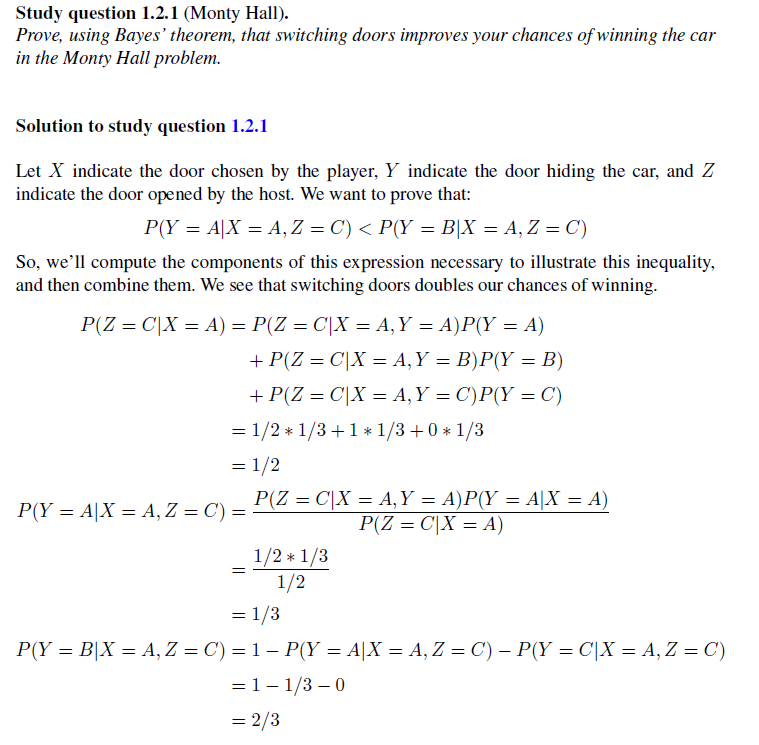 However them note also that (pag 15):

The reader may find it instructive to note that the explanation above is laden with counterfactual terminology; for example, “He could have opened,” “because he was forced,” “He was about to open.” Indeed, what makes the Monty Hall example unique among probability puzzles is its critical dependence on the process that generated the data. It shows that our beliefs should depend not merely on the facts observed but also on the process that led to those facts. In particular, the information that the car is not behind Door C, in itself, is not sufficient to describe the problem; to figure out the probabilities involved, we must also know what options were available to the host before opening Door C.

Study question 1.5.4 Define the structural model that corresponds to the Monty Hall problem, and use it to describe the joint distribution of all variables.

The question 1.3.5 is solved above (even if the exercise number reported in the solution is erroneous) 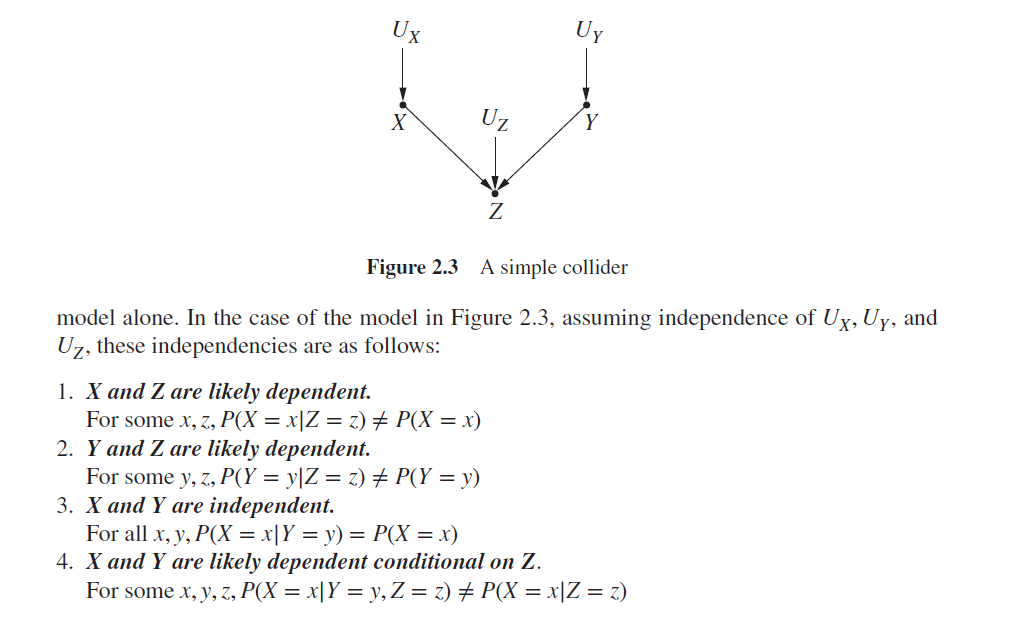 “ … Another example of colliders in action—one that may serve to further illuminate the difficulty that such configurations can present to statisticians—is the Monty Hall Problem, which we first encountered in Section 1.3. At its heart, the Monty Hall Problem reflects the presence of a collider. Your initial choice of door is one parent node; the door behind which the car is placed is the other parent node; and the door Monty opens to reveal a goat is the collision node, causally affected by both the other two variables. The causation here is clear: If you choose Door A, and if Door A has a goat behind it, Monty is forced to open whichever of the remaining doors that has a goat behind it. Your initial choice and the location of the car are independent; that’s why you initially have a 1/3 chance of choosing the door with the car behind it. However, as with the two independent coins, conditional on Monty’s choice of door, your initial choice and the placement of the prizes are dependent. Though the car may only be behind Door B in 1/3 of cases, it will be behind Door B in 2/3 of cases in which you choose Door A and Monty opened Door C.”

The figure 2.3 represent the DAG for the basic collider example; two independent causes with a common effect.

Now, the terms $P(Z=C|X=A,Y=y)$ reveals the dependencies, that are induced by the rules of the game. Indeed the three probabilities are different: $1/2$ if $Y=A$; $1$ if $Y=B$, $0$ if $Y=C$). The host cannot open the door chosen by the player, and the last two probabilities are true because the host cannot open the door that hides the car too; so his chosen is forced. The first probability is true because if $Y=A$ the host choice remain random ($C$ or $B$).

The same fact is expressed also in the term $P(Y=C|X=A,Z=C)=0$, that justify the advantage for the player to switch from the door $A$ to door $B$.

However this fact seems me in contrast with the main argument of causal inference. It is so? If yes, because it seems work? What is the solution proposed in causal inference?

There is no contradiction, the problem can be solved with standard statistical tools but causal tools can be used too. The point is that the rules of the game imply some dependencies, but the rules can be encoded in the SCM too, and in particular in the basic collider DAG above. Indeed the DAG imply some dependencies in the joint distribution $F(X,Y,Z)$. The SCM is not mandatory here but it can be used because causality play his role here. Moreover, as always, another workable point of view can help to understand what happen, and here the SCM does it.

As example, If the host don't know where the car is and, then, can exclude (more than open) the door with the car, we have that

then the advantage of switching disappear

because the previous dependencies disappear, and the DAG above not hold yet.

Not the answer you're looking for? Browse other questions tagged probability conditional-probability causality intervention-analysis or ask your own question.

24
What are the main differences between Granger's and Pearl's causality frameworks?
1
What if two players were playing the Monty Hall Game?
90
The Book of Why by Judea Pearl: Why is he bashing statistics?
24
Monty Hall Problem with a Fallible Monty
4
Law of total probability and conditioning on multiple events
3
Are causal effects constant over time?