Ask Question
Asked 1 month ago
Active 1 month ago
Viewed 48 times
1
$\begingroup$
Closed. This question is off-topic. It is not currently accepting answers.

I have also seen this how to generate data from cdf which is not in closed form? and Multivariate and Marginal simulations, but still so confused. The fact is how do I assume the distribution(marginal distribution) of $y$. Or do I need to go for indirect method (eg. accept-reject method)?

and both statements are simultaneously correct. This implies that if one jointly simulates $(U,Y)$ from the joint Normal distribution, the resulting $Y$ will be distributed from $\mathcal N(0,2)$. As an illustration, here are 100 $\mathcal N(u_i,1)$ densities when $$U_1,\ldots,U_{100}\stackrel{\text{iid}}{\sim} \mathcal N(0,1)$$ and their average density (in red): 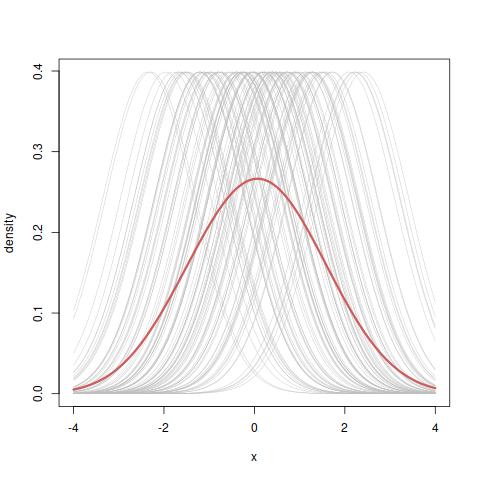 A mistake in considering that since $Y\sim \mathcal N(U,1)$ it cannot be $\mathcal N(0,2)$ at the same time is to forget that $U$ is a random variable. (There is some similarity with accept-reject in that, while all simulations are from the proposal distribution $g$, those that are accepted are also simulations from the target distribution $f$.)

Another illustration is provided by finite mixtures of distributions: if $$Y\sim f(y)=\sum_{i=1}^k\omega_i f_i(y)\qquad\sum_{i=1}^k\omega_i=1$$ this distribution can be represented as the marginal distribution (in $Y$) of a joint distribution on $(U,Y)$ such that $U$ is marginally distributed as a Multinomial variable: $$\mathbb P(U=i)=\omega_i \qquad i=1,\ldots,k$$ and the conditional distribution of $Y$ given $U$ is $$Y|U=i \sim f_i(y)$$ Generating an index $i$ with probability $\omega_i$ and then a realisation from $f_i(\cdot)$ is equivalent to generating from $f(\cdot)$.

Not the answer you're looking for? Browse other questions tagged r simulation monte-carlo random-generation mixture-distribution or ask your own question.