I came across this image in a blog post here. 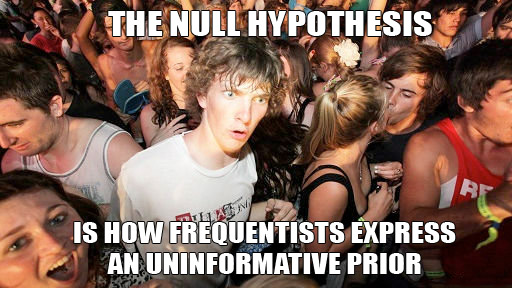 I was disappointed that reading the statement did not elicit the same facial expression for me as it did for this guy.

So, what is meant by the statement that the null hypothesis is how frequentists express an uninformative prior? Is it really true?

Edit: I'm hoping someone can offer a charitable interpretation that makes the statement true, even in some loose sense.

However, both frequentist and Bayesian hypothesis testing incorporate an element of self-skepticism, in that we are required to show that there is some evidence that our alternative hypothesis is in some way a more plausible explanation for the observations than random chance. Frequentists do this by having a significance level, Bayesians do this by having a scale of interpretation for the Bayes factor, such that we wouldn't strongly promulgate a hypothesis unless the Bayes factor over the null hypothesis were sufficiently high.

Now the reason why frequentist hypothesis tests are counter-intuitive is because a frequentist cannot assign a non-trivial probability to the truth of a hypothesis, which sadly is generally what we actually want. The closest they can get to this is to compute the p-value (the likelihood of the observations under H0) and then draw a subjective conclusion from this as to whether H0 or H1 are plausible. The Bayesian can assign a probability to the truth of a hypothesis, and so can work out the ratio of these probabilities to provide an indication of their relative plausibilities, or at least of how the observations change the ratio of these probabilities (which is what a Bayes factor does).

In my opinion it is a bad idea to try to draw too close a parallel between frequentist and Bayesian hypothesis testing methods as they are fundamentally different and answer fundamentally different questions. Treating them as if they were equivalent encourages a Bayesian interpretation of the frequentist test (e.g. the p-value fallacy) which is potentially dangerous (for example climate skeptics often assume that a lack of a statistically significant trend in global mean surface temperature means that there has been no warming - which is not at all correct).

The reason you don't have the same epiphanic look on your face as that guy is I think that . . . the statement isn't true.

A null hypothesis is the hypothesis that any difference between the control and experimental conditions is due to chance.

An uninformative prior is meant to state that you have prior data on a question, but that it doesn't tell you anything about what to expect this next time round. A Bayesian is likely to maintain that there's information in any prior, even the uniform distribution.

Perhaps I am lacking in my understanding of uninformative priors, though. I look forward to other answers.

In fact, the reference points to Jaynes:

If case (I) arises (and it does more often than realized), the Bayesian and orthodox tests are going to lead us to exactly the same results and the same conclusion, with a verbal disagreement as whether we should use 'probability' or 'significance' to describe them.

So, in fact there are similar cases, but I wouldn't say the statement in the image is truth if you are, for example, using a Cauchy distribution as likelihood...

I'm the one that created the graphic, though as noted in the accompanying post it's not originally my insight. Let me provide some context for how it came up and do my best to explain how I understand it. The realization occurred during a discussion with a student who had mostly learned the Bayesian approach to inference up to that point. He was having a hard time understanding the whole hypothesis testing paradigm, and I was doing my best to explain this decidedly confusing approach (if you consider “difference” to be a negative - as in not equal to - then the standard null hypothesis approach is a triple negative: the researchers’ goal is to show that there is not no difference). In general, and as stated in another response, the researchers usually expect some difference to exist; what they really hope to find is convincing evidence to “reject” the null. To be unbiased, though, they begin by essentially feigning ignorance, as in, “Well, maybe this drug has zero effect on people.” Then they proceed to demonstrate through data collection and analysis (if they can), that this null hypothesis, given the data, was a bad assumption.

To a Bayesian, this must seem like a convoluted starting point. Why not just begin by announcing your prior beliefs directly, and be clear about what you are (and aren't) assuming by encoding it in a prior? A key point here is that a uniform prior is not the same as an uninformative prior. If I toss a coin 1000 times and get 500 heads, my new prior assigns equal (uniform) weight to both heads and tails, but its distribution curve is very steep. I am encoding additional information that is highly informative! A true uninformative prior (taken to the limit) would carry no weight at all. It means, in effect, starting from scratch and, to use a frequentist expression, let the data speak for itself. The observation made by "Clarence" was that the frequentist way to encode this lack of info is with the null hypothesis. It’s not exactly the same as an uninformative prior; it's the frequentist approach to expressing maximal ignorance in an honest way, one that doesn't presume what you wish to prove.

Not the answer you're looking for? Browse other questions tagged hypothesis-testing bayesian frequentist uninformative-prior or ask your own question.