I recently ran into two problems:

If possible, please advise what kind of background prob/stats materials these relate to. Thanks!

UPDATE: Here are some thoughts on the two questions:

1.since rand() only generate 0 or 1, it's useless to write code like the following:

I guess this involves Bernoulli trial and Binomial distribution, but the question asks for EXACT distribution for 90% of 1 and 10% of 0. I'm puzzled how to proceed.

2.I put it the wrong way - my bad. My initial thoughts on this is as follows:

But I didn't see how to derive this equation into computable format.

The reminding of Geometric Series is appreciated! The equation indeed matches my initial thoughts on the summation of conditional probabilities -- I failed to recognize it as geometric series.

So I guess the ratio should be the result for that summation:

So the ratio of boys in the society will be 100%? Anything wrong here?

The answer to the second question is that the ratio becomes undefined because the society has a 100% chance of dying out. The reason why this happens is fascinating: statistical fluctuations in the balance of males and females (a "second order effect") in a population that otherwise would appear to be stable in size (a "first order effect") will cause it to decrease.

To make it clear what this statement means, here are the assumptions I use:

Furthermore--regardless of whether we include a limit in the model--variation in the numbers of males and females will cause the population eventually to die out anyway. This is because the number of breeding pairs can only equal the smaller of the numbers of males or females produced in the preceding generation and fluctations in both of those (which are up or down from the expected value with roughly equal probability) will cause the smaller of the two to fluctuate downwards much more often than it fluctuates upwards. This mechanism further forces the population down to zero.

Rather than carry out a full and rigorous analysis of the effects of fluctuation, let's do a simulation and look at what happens to small populations of, say, $500$ males and $500$ females. I did this calculation $10,000$ separate times for $81$ new generations (setting the limit to an infinite value, to be conservative): 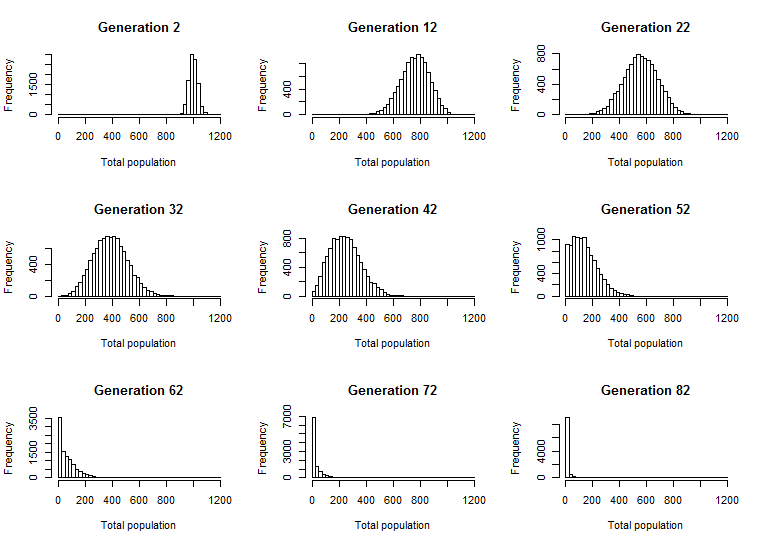 (Larger populations will take more than $12$ generations to shrink with near certainty, but the same things eventually happen to them.)

Here is R code to perform the simulation.

Here are some thoughts to get you started:

The probability of getting a single 1 (or 0) is 50%, and as you've noticed this isn't especially helpful. But what's the probability of getting 00 in two trials? or 010 in three trials? Or at least two 1's in four trials? I'd recommend you start thinking about what you can accomplish if you shift your event space from single events to sequences of experiments. From there, you can look at permutations, combinations, minimal conditions... You can also combine probabilities using AND and OR rules, or even conditional probabilities.

UPDATE: Regarding your current solution, when in doubt: run some simulations and see what happens!

Hmmm... not quite $9/10ths$. Why do you suppose we got $8/9ths$ instead? You're almost there! Also, as whuber mentioned, the direction you are going is not the only solution to this problem. But what you're doing is creative and I think you should stay the course before figuring out a method that doesn't require you to drop samples.

Nevermind, your solution for this part actually works. I forgot that you were counting up from 0 and not 1. Good job! Now work on making whuber happy :)

The number of trials required to achieve a single success can be modeled using a Geometric Distribution. I don't want to give away the whole solution here, but take a look at the calculation for the mean (i.e. the "expected value") for this distribution given a known success probability.

UPDATE: I was suggesting you look at the mean of the geometric distribution, not use ageometric series (well, in all fairness, they're definitely closely related). Your geometric series calculation contains the entire sampling space, so we should expect it to sum to 1 (you're basically on track to derive the pdf of the geometric distribution). Also, just intuitively, you should see why the expected ratio absolutely should not be 100% boys. We're not precluding female births here in any way.

1
Need direction in regards to probability based random value generation
4
What is this random number generation algorithm and why does it work (or does it)?
1
Probability and number of trials
1
Just How Independent are Events Anyways
3
Program analysis of a coin toss simulator
0
Identifying and understanding algorithm of random number generation
3
Generation of random variables via composition and inversion