I'm coming from this question Similarity between two sets of random values (which still stands BTW) where @whuber suggested in the comments that I use a Q-Q plot to assess the similarity of two discrete distributions.

To recapitulate, I have two sets of random floats between [0,1] of different sizes:

and I need to generate the Q-Q plot for thess sets. For what I've read, if the sets where of equal sizes ($N_B = N_A$) I would simply sort both sets from minor to major values and then plot one against the other in a 1:1 correspondence.

My sets are different in sizes and the sources I've found [1], [2] both say that I need to sort both sets and then interpolate the larger set ($B$ in my case). This is counter-intuitive to me since I would expect to have to generate more points from the smaller $A$ set (through interpolation) so as to be able to plot this expanded set $A'$ against the $B$ set.

So obviously I'm not understanding correctly the process. What are the steps I should follow to generate a Q-Q plot for two distributions like the ones I presented above? 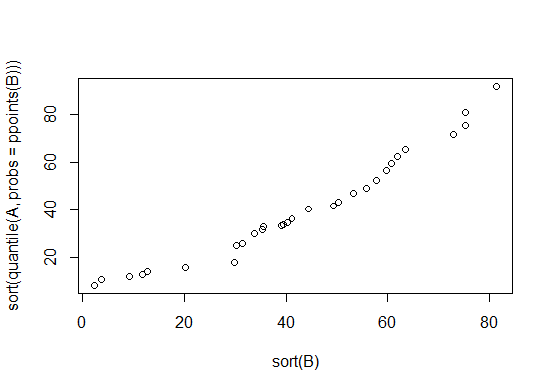 Here I interpolated the larger set (that is, estimated 30 quantiles from 50 points); you can do the same to "interpolate" the smaller set but I don't think that helps at all, since the extra 'information' is really just a function of your quantile interpolation function. 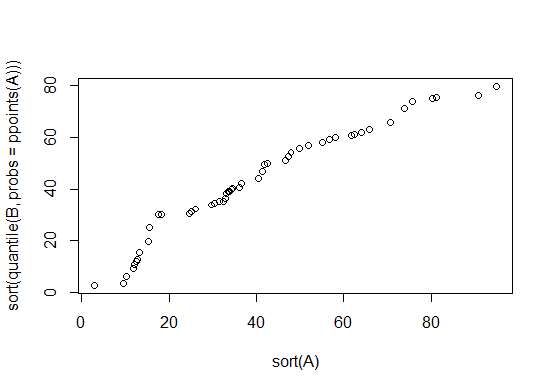 Here they are both plotted together (with the second plot above now having X and Y swapped so they both have the same variable on the same axis); the greater number of points has been plotted with the smaller, red circles. I think there's not really any additional information of any real value in the plot with more points, but you are free to disagree: 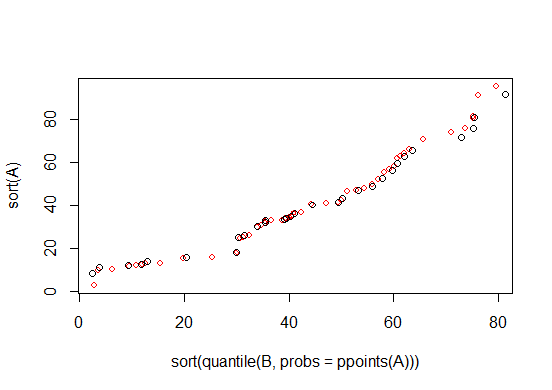 So in short, look at ?quantile and ?ppoints to see what's going on.

edit: sorry, I just noticed you have $N_B>N_A$. Mine is the other way around. I assume you can interchange the roles of A and B.

By the way, you can easily avoid sorting the sets, it's just that ppoints doesn't return things in the same order as its argument and I was being lazy.

If you define alpha=.5 then quantile(A,probs=(rank(B)-alpha)/(length(B)+1-2*alpha)) should reproduce the above plot without calling sort on either argument to plot.

(personally, I prefer values nearer alpha=.375 but not so much that I would bother fiddling with the ppoints default in most cases)

That should be enough detail that you can implement it in Python, I think.

Not the answer you're looking for? Browse other questions tagged quantiles qq-plot or ask your own question.

1
Calculate percentage difference for two sets of points
7
How do I generate a QQ-Plot for data fitted using fitdistr?
4
Using Q-Q Plot for determining distribution of two data sets
5
Q-Q plot and sample size
4
Why is the QQ Plot for Normal Distribution a Straight Line?
0
Is there any relationship between random numbers sampled from some continuous distribution D and the quantile function of D?
1
Difference between QQ plot and KS test
4
Detect what is wrong with the R program for a Poisson Q-Q-plot?
5
Best way to construct a QQ-plot