Which Distribution Does the Data Point Belong to?

I have two distributions which are derived from 2 separate sets of data. These distributions are not normal, and it is not clear at this point if they belong to any family of known pdfs (they are not symmetric either). Given a data point, I need to decide which distribution it is most likely to belong to. If these were normal distributions, I could do usual parametric tests and go from there, but in this case I am not sure how to proceed. I searched around a bit, but I couldn't find anything, probably because I am not using the right keywords. Any help is much appreciated.

Edit to clarify: I should have mentioned that it was univariate. I might as well explain the actual problem here as well. We have time-spent data for users on websites. We also have information on whether a user liked or disliked some of those sites (about 4% of all the sites). So we know the distribution of time spent for like and dislike. An obvious question, then, is for a random user who spent x amount of time, are they more likely to have liked the page or dislike the page. Our time spent information is based on seconds, so the distributions are really discreet, but in real life, they are continuous.

(My answer looks like I am assuming univariate distributions, but the underlying ideas carry over to the case with more variates.)

If you had population distributions ($F$, $G$) rather than samples and a point $x_{new}$, you could compare the height of the density (or probability function in the case of discrete random variables) to find the distribution with the greater likelihood of producing the observation. i.e. compare $f(x_{new})$ with $g(x_{new})$. 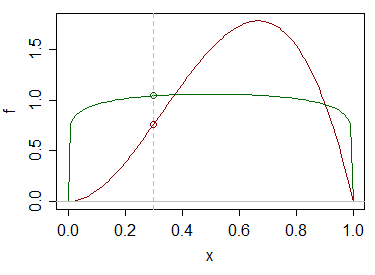 However, you only have samples. With large samples, you could make some assumptions (such as "the original population densities are smooth") and use (say) kernel density estimates* ($\hat f$ and $\hat g$), and then compare heights of those at $x_{new}$ - though of course the estimated probabilities are dependent on things like your choice of bandwidth and kernel, and are subject to random variation (a new sample would result in different relative density estimates at each $x$, though in large random samples they should be looking something like the population densities).

* or logspline density estimates, or whatever

There are some other things you might do but it will pretty much boil down to 'what are you prepared to assume?'

(Or did you want to take a Bayesian approach?)

Being not a professional statistician, I see situation as this. We have two (or more) overlapping distributions. The task often appears in spectroscopy. So here you have approximately 0.25 probability belonging to one distribution and 0.1 to another respectively. 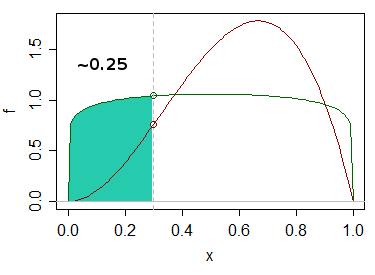 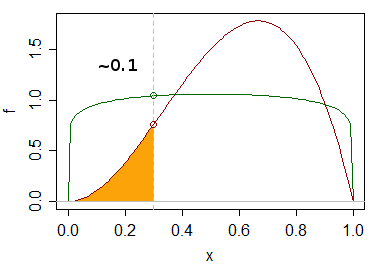 I am trying to solve an completely analogous problem. What I have started using as a basic approach is hypothesis testing.

This way you can get a a number "d" and another "l". If the time spent is below d, they disliked and if the time spent is above l, they liked. What to do between d and l is something even I want to know. ie, we have never used the value of the expected mixture (approx 4% people dislike the website) and neither am I able to use it in my problem.

Not the answer you're looking for? Browse other questions tagged distributions inference sample or ask your own question.

4
Given $n$ different univariate non-normal sample sets calculate for a new sample, $x$, which it most likely belongs to

4
Get distribution curve characteristics by selecting peak point?
0
What are the rules for picking a distribution for modelling a data set?
20
For which distributions does uncorrelatedness imply independence?
1
Standard deviation in Weibull distribution
4
Compare skewness of many distributions with few observations
3
How to compare multimodal distributions?
4
Deriving the moments of Student-t distributions