What is “the shortest half of the data”? 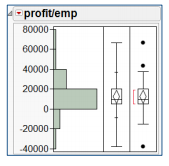 Right below, there are a bunch of explanations of the meaning of the different features of the outlier box plot. 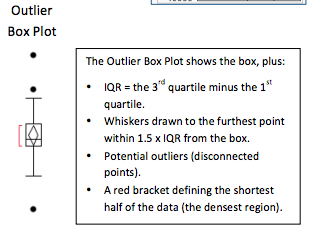 The red bracket is "the shortest half of the data (the densest region)". What does this expression exactly mean? How different is it from the quartiles?

The red bracket represents the smallest interval that encompass 50% of the data.

The two quartiles represents the first 25% of the data from each side of the mean encompassing for 50% of the data but this is not necessarily the densest region.

Imagine a skewed distribution that has a very long tail on the right. The median might be much higher than the mode and be fairly high. In consequence the 25% quartile will eventually include the mode but the right quartile will be long in a very sparse space. The densest region necessarily include the median (exception in @whuber's comment below) and one of the two quartile.

The JMP documentation is a little unclear--it just cites a book: Robust Regression and Outlier Detection.

However, it looks like the bracket contains the "highest density interval", or "highest probability density" interval. This is the smallest (i.e., shortest) interval that contains 50% of the data points.

The 50% densest region runs from 0 to 6 because it contains half the data (six of the twelve points) and is the shortest interval that does so (it's five units long;the next closest (2-10) is eight units long instead).

The highest probability interval often shows up in Bayesian settings, sometimes as an alternative to confidence intervals. Here, they probably mean for you to use it a heuristic for detecting outliers.

Not the answer you're looking for? Browse other questions tagged distributions outliers histogram boxplot jmp or ask your own question.

8
Retrieving minimum width that contains specified fraction of all values

2
What do you call just the first half of a bell curve?
3
Exploratory data analysis using box plots
14
What information does a Box Plot provide that a Histogram does not?
6
Violin plot or bean plot? What are the advantages of each?
32
What are the properties of a half Cauchy distribution?
17
What is the basis for the Box and Whisker Plot definition of an outlier?
2
Outlier detection for skewed data
2
What is Half-Inverse-Student-t distribution?