The six conditions are independent production of a chemical in six different microorganisms.

My aim was to find if the production of the chemical is significantly higher in Samples 1 - 5 than in C (control).

At first, I carried out mean, SD and t-test (one-tail). Although SD error bars are large, two of the samples have mean values that are significantly higher than that of C.

I will be happy if anyone could advise me on the best way to analyse this small dataset.

One could use a non-parametric version of ANOVA: this is called the Kruskal-Wallis test. It is based on ranking all 17 results and computing the mean ranks within each group. The mean rank of 2.0 among the controls is obviously smaller than any other mean rank (which range from 7 to 12). However, the test p-value is only 0.0937 (based on a chi-squared approximation).

Within each group (including the control), the SDs are approximately one-half the means (the "trend" in the figure). 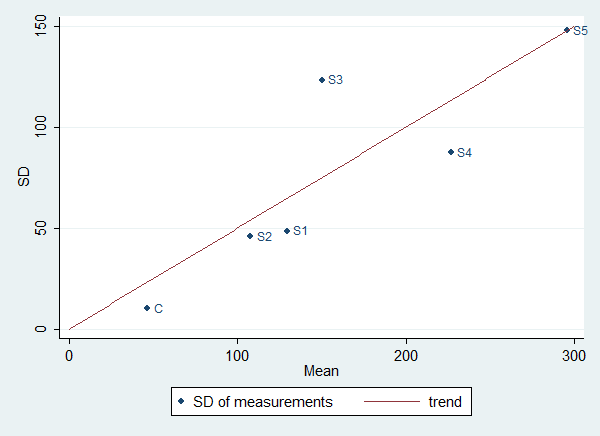 This suggests (and justifies) basing the analysis on the logarithms of the concentrations, for which the group SDs will be approximately stable. This provides 11 degrees of freedom for estimating variation, so having just two or three measurements per group is not a limitation. This observation (that using logarithms may stabilize the residuals) is important in its own right, because it indicates how best to make estimates, how to carry out future analyses on continuations of this experiment, and supports the perception that the standard deviation of the control measurements really is relatively small. (That otherwise is a weak conclusion because there are only two control measurements.)

Regression (or equivalently, ANOVA) of the logs against the group identifiers has an overall p-value of 0.0521 (using an F-test with 5 and 11 degrees of freedom). This is suggestive but not quite low enough to be taken as "significant" by most journals. However, this is a two-sided test, whereas your hypothesis is one-sided. A crude adjustment is to halve the p-value to reflect this and report the result as "significant" with p approximately equal to 0.026.

Because this crude adjustment is merely an approximation, you might drive the point home with a permutation test. Returning to the idea of a non-parametric analysis, we ask for the chance that the average rank of the control measurement is 2.0 or less under the null hypothesis that all 17 results were randomly associated with the 17 measurements. This is equivalent to the control having either the first and second or the first and third smallest concentrations out of the 17. The chance of the first event is $\binom{2}{2}/\binom{17}{2} = 1/136$ and the chance of the second event is the same, for a total chance of $2/136$, or 1.47%. You could even conservatively characterize the results as "all the control concentrations were among the lowest three." The chance of this is $\binom{3}{2} / \binom{17}{2}$, equal to 2.2%. In any case you have a significant result for $p \lt 0.022$.

There is a time to make formal statistical inferences from sample to population, and a time to simply report on your descriptive results and let your audience make informal inferences--or not, as they see fit. This looks like the latter. With two control values, you are one step away from having no variation on which to base any findings.

"I was surprised however, that median and Wilcoxon-Mann- Whitney tests did not reveal statistical significant results." I recommend that you familiarize yourself with the literature on statistical power.

This is an interesting data set. It seems like a good idea to follow @whuber's advice and do the analysis on the log scale. However, there is more than one hypothesis here. For you could have the hypothesis

But you could also have:

$H_{1}$ appears to be the most plausible hypothesis to me as judged by eye. You can also have:

Each of these hypothesis, if true, would constitute some sort of "significant" result. In any case, once you have decided that they are different, the interest then shifts to saying "well, exactly how are they different?"

I think you have a less significant result because you are testing $H_{2}$ which has many parameters.

The two-sample T statistic is about $2.64$, but the assumption of equal variance is not supported by the data, especially as the control group was by far the lowest variance, and is nearly triple the variance of the pooled sample.

More later as I have to stop for now...

4
How to compare two non-normally distributed samples with very different sizes? (Mann-Whitney vs Randomization/Bootstrap)
2
Is this method of finding the confidence interval correct?
1
How to show whether the average coefficients of determination from one regression technique are better than another across many objects?
4
Always use Welch-t test (unequal variances t-test) instead of Student-t or Mann-Whitney test?
0
Comparing two discrete independent variables