Average curve from set of curves

I have done some initial analyses on some patient datasets regarding neuro-degenerative diseases. A method I've used is DFA (Detrended Fluctuation Analysis) in MATLAB, which produced a family of curves (straight lines, in fact) for each patient-disease group. Below is a a sample screenshot: 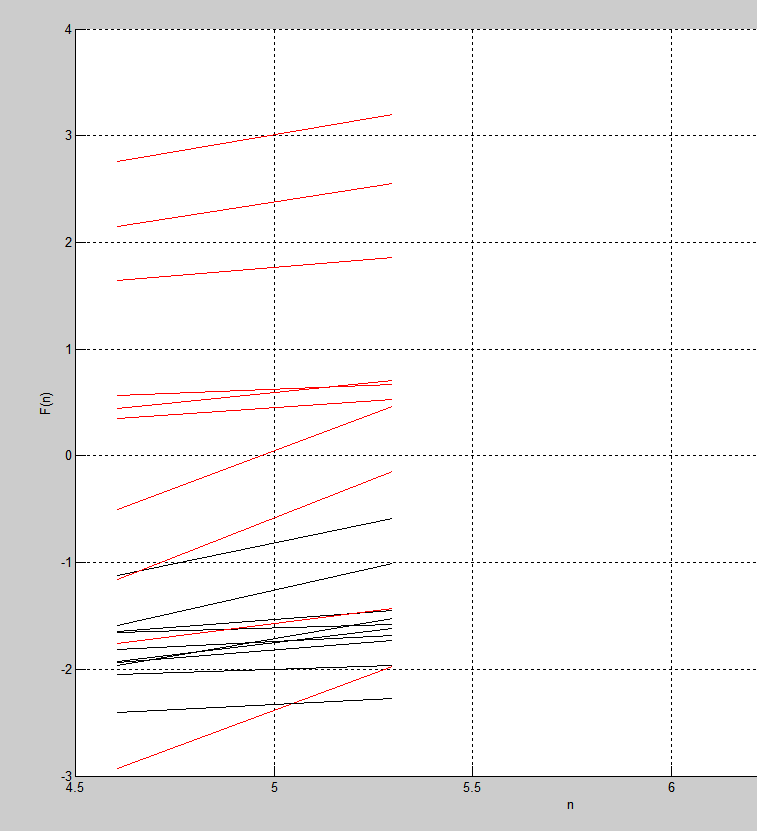 Now, all I want to do is to produce an average curve from each family of curves, in order to demonstrate some general differences between these patient groups. What is the way to do that?

EDIT: I'm editing my question in order to provide some more information about the nature of the datasets I'm working with. The case is the following:

Below is a subsample of the time-series regarding one single patient:

Based on the additional information you provided I believe that using a linear mixed effects model as briefly suggested by @gung is your best choice. Given you are using MATLAB I believe that the resource found here are your best shot to familiarize yourself with the functionality you need to employ regarding the function fitlme.

Using a linear mixed effects model will take care of the fact that you have irregular sampling intervals and that your sample has a clear clustering (different groups of patients). It will also allow you to naturally estimate group-specific means after you marginalize the individual variations.

would fit a fixed effects intercept and slope as well as a $k$-distinct intercepts and slopes for each of the $k$ groups defined by the the variable group. There as some very nice threads on this forum already on how to define random effects structures; see for example the threads on: R's lmer cheat-sheet and Random effect specification in lmer mixed effect model. Note that these threads are concerned with R but actually both R and MATLAB use Wilkinson notation so in that sense you are covered. MATLAB seems not to use the syntax (1|a/b) which would naturally expand (1|a) and (1|a:b) (: denotes an interaction) because probably it is was not part of the original Wilkson notation but OK, you can write it out yourself.

A line is described by its intercept and slope. So you could, for each curve, find those two parameters then get means (and std deviations, etc.) for your two groups.

Below is a plot demonstrating this approach: each 'x' is a slope-intercept pair; the two circles are the means for their respective color groups. 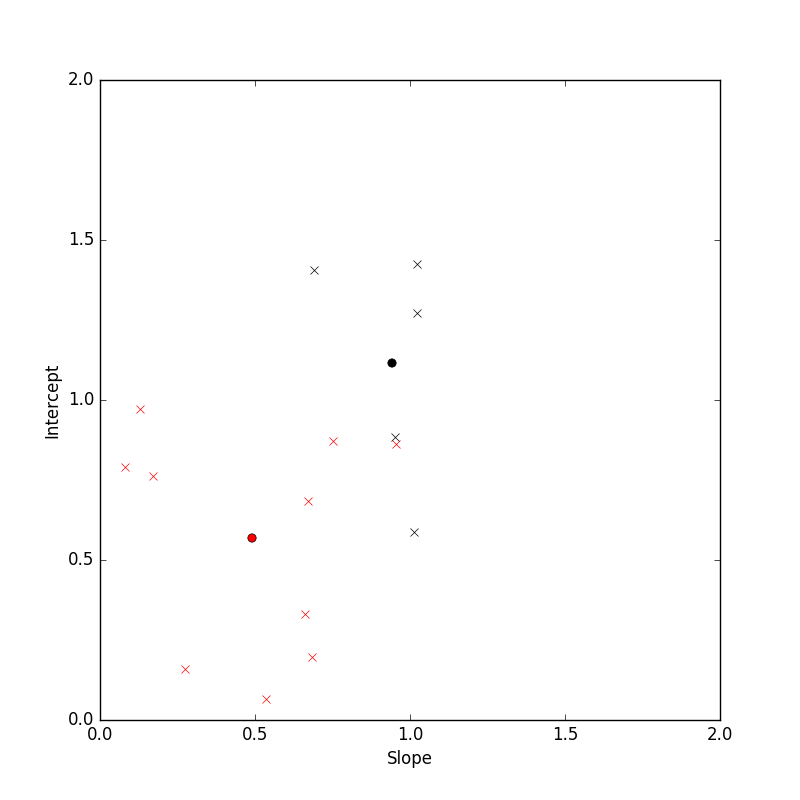 Not the answer you're looking for? Browse other questions tagged matlab average curves or ask your own question.

7
Fit between two curves
1
Average multiple precision recall curves
0
Measuring average from a scale
0
Extracting values from a sigmoidal dose curve
1
Clustering curves
1
“Changing” standard deviation?
1
What method can I use to produce a single curve from a number of curves?