As I'm sure everyone here knows already, the PDF of the Beta distribution $X \sim B(a,b)$ is given by

I've been hunting all over the place for an explanation of the origins of this formula, but I can't find it. Every article I've found on the Beta distribution seems to give this formula, illustrate a few of its shapes, then go straight on to discussing its moments and on from there.

I don't like using mathematical formulae I can't derive and explain. For other distributions (e.g. the gamma or the binomial) there's a clear derivation I can learn and use. But I can't find anything like that for the Beta distribution.

So my question is: what are the origins of this formula? How can it be derived from first principles in whatever context it was originally developed?

[To clarify, I'm not asking about how to use the Beta distribution in Bayesian statistics, or what it means intuitively in practice (I've read the baseball example). I just want to know how to derive the PDF. There was a previous question that asked something similar, but it was marked (I think incorrectly) as a duplicate of another question that did not address the issue, so I haven't been able to find any help on here so far.]

EDIT 2017-05-06: Thanks everyone for the questions. I think a good explanation of what I want comes from one of the answers I got when I asked this of some of my course instructors:

"I guess people could derive the normal density as a limit of a sum of n things divided by sqrt(n), and you can derive the poisson density from the idea of events occurring at a constant rate. Similarly, in order to derive the beta density, you would have to have some kind of idea of what makes something a beta distribution independantly from, and logically prior to, the density."

So the "ab initio" idea in the comments is probably closest to what I'm looking for. I am not a mathematician, but I feel most comfortable using mathematics that I can derive. If the origins are too advanced for me to handle, so be it, but if not I would like to understand them.

probability mathematical-statistics density-function beta-distribution history
Share
Improve this question
edited May 6, 2017 at 14:46
Will Bradshaw
asked May 4, 2017 at 20:22

As a former physicist I can see how it could have been derived. This is how physicists proceed:

They do this to all kinds of integrals all the time so often that it happens reflexively without even thinking. They call this procedure "normalization" or similar names. Notice how by definition trivially the density has all the properties that you want it to have, such as always positive and adds up to one.

The density $f(t)$ that I gave above is of Beta distribution.

@whuber's asking what's so special about Beta distribution while the above logic could be applied to an infinite number of suitable integrals (as I noted in my answer above)?

The special part comes from the binomial distribution. I'll write its PDF using similar notation to my beta, not the usual notation for parameters and variables: $$ f'(x,y|s) = \binom {y+x} x s^x(1-s)^{y}$$

Thomas Bayes (1763) derived the Beta distribution [without using this name] as the very first example of posterior distribution, predating Leonhard Euler (1766) work on the Beta integral pointed out by Glen_b by a few years, but the integral also appears in Euler (1729 or 1738) [Opera Omnia, I14, 1{24] as a way to generalise the factorial function $-$which may be why the normalising Beta constant $B(a,b)$ is also called the Euler function$-$. Davies mentions Wallis (1616-1703), Newton (1642-1726), and Stirling (1692-1770) dealing with special cases of the integral even earlier. Karl Pearson (1895) first catalogued this family of distributions as Pearson Type I.

First of all, I am not good in mathematically precise descriptions of concepts in my head, but I'll try my best using a simple example:

Imagine you have a bow, many arrows and a target. Let's further say your hit rate $\lambda$ (for hitting the target) is precisely a function of the distance to the center of the target and of the following form \begin{eqnarray} \lambda=g(x)=\lambda_{max}-(q|x-x_0|)^\frac{1}{q},~q > 0,~0 \leq \lambda \leq \lambda_{max} \end{eqnarray} where x is the distance to the center of the target ($x_0$). For $q=1/2$ this would be a first order approximation of a Gaussian. That would mean that you most frequently hit the bull-eye. Similarly, it approximates any bell-shaped curve, for example, resulting from diffusion of Brownian particles.

Now, let is furthermore assume that somebody really brave/stupid tries to trick you and displaces the target on every shot. Thereby we make $x_0$ itself to be a random variable. If the distribution of that person's movements can be described by a (p-1)-power of $g(x)$ (that is $P(x_0) = C\cdot g(x)^{p-1})$), a simple transformation of random variables (remember $P(\lambda)d\lambda=P(x_0)dx_0$) leads to a Beta distributed $\lambda$:

where the normalization constant $C'$ is the beta function. For the standard parametrization of the beta distribution we would set $\lambda_{max} = 1$.

I hope that this derivation gets somewhat close to what your instructor meant. Note that the functional forms of $g(x)$ and $P(x_0)$ are very flexible and reach from triangle like distributions and U-shaped distributions (see example below) to sharply peaked distributions. 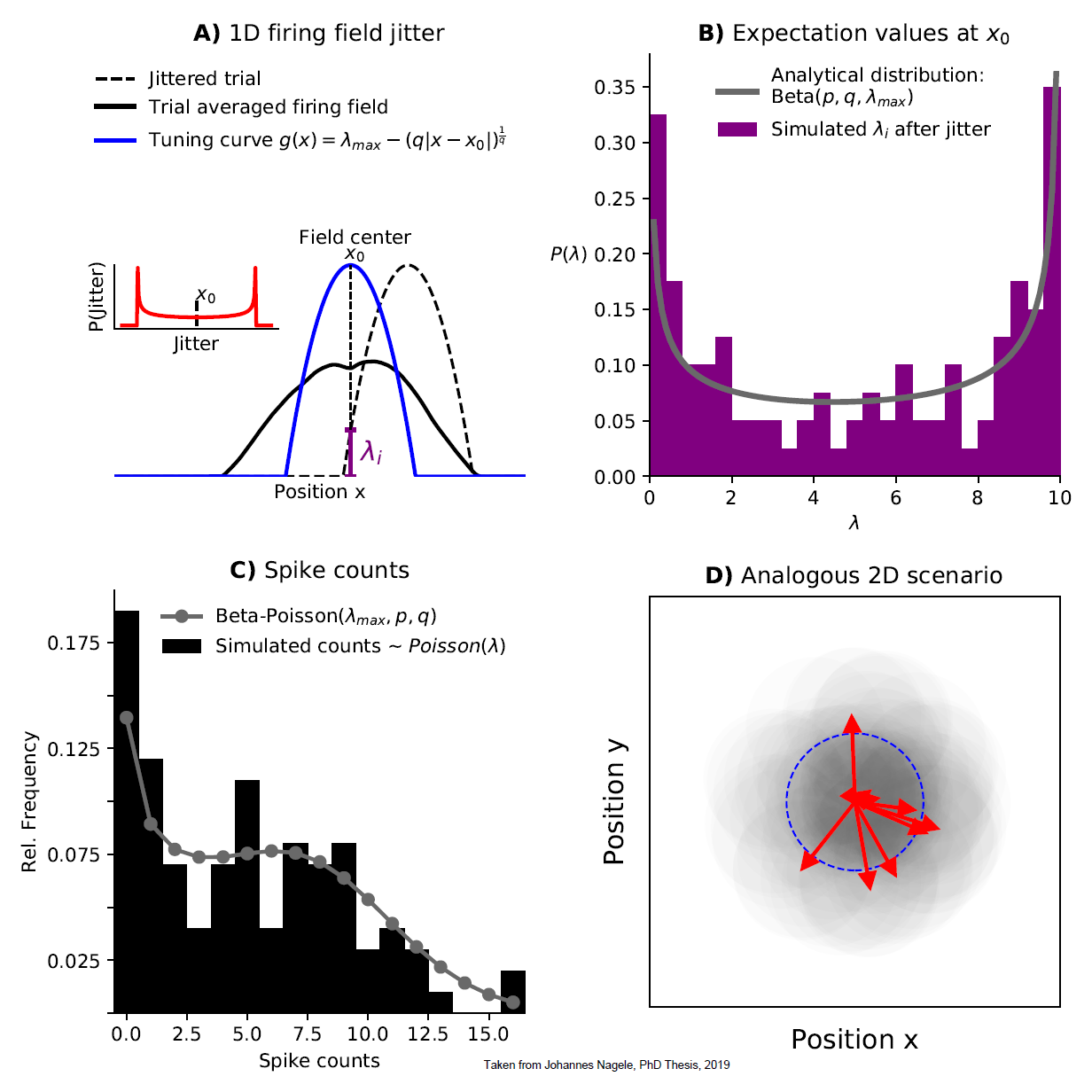 A: Simulated 1D trial displacement, drawn from the jitter distribution in the inset ($P(jitter)\propto g(x)^{p-1}$). The trial-averaged firing field (solid black line) is broader and has a lower peak rate as compared to the underlying tuning curve without jitter (solid blue line, parameters used: $\lambda_{max} = 10, p = .6, q=.5$. B: The resulting distribution of $\lambda$ at $x_0$ across N=100 trials and the analytical pdf of the Beta distribution. C: Simulated spike count distribution from a Poisson process with parameters $\lambda_i$ where i denote the indices of the trials and the resulting Beta-Poisson distribution as derived as sketched above. D: Analogous situation in 2D with random shift angles leading to the identical statistics.

Not the answer you're looking for? Browse other questions tagged probability mathematical-statistics density-function beta-distribution history or ask your own question.