I'm doing some experiments to assess the extend to which MV skewed distributions can affect eigen-vectors (and more specifically Deming regressions).

I'll be using a (univariate) measure of directional scatter that does not assume symmetricity ($\alpha\in \mathbb{R}^p:||\alpha||=1$):

Then, we have (at least, more suggestions are welcomed) two alternative strategies for finding $\alpha^*$:

These two strategies should --for large enough $M$ and $n$-- give comparable results when the $X$'s have an elliptical density, but notice that only strategy (b) requires the elliptical assumption.

Now, i'm trying to measure the difference between the two approaches on skewed $X$ to assess the extend to which skweness affects the estimation of the last eigen-vector --i'm really interested in the consequence of skewness, so i'll only use distributions with finite second moments.

I've tried two (simple) bivariate skewed distributions for the $X$ (the skew normal and the log-normal$^1$) and i don't find large differences $^2$ between approach (a) and (b).

This, and some thinking, lead me to conclude that it's hard to imagine a skewness mechanism that would make (a) very different from (b). I was wondering whether anyone here has a counter-example to that?

$^0$that is, the $\alpha_m$ are the directions of the hyperplanes through $p$ points drawn equiprobably from $1:n$;

$^1$I coordinate-wise $\exp$-ed a MV Gaussian centered at the origin with component-wise variances less than 2 to avoid numerical troubles.

$^2$the median differences over 100 trials are about 10%, which is not very much considering the low efficiency of the IQR.

The IQR captures the middle 50% of a distribution. The variance-covariance matrix records second moments, which we can think of as weighted averages of values--with the weights given by the values themselves. Thus a few extreme values will influence the latter while having little or no influence on the former. These two characterizations suggest we can construct a counterexample by combining a distribution that is narrow along the middle 50% of its values with one that has a small proportion of extraordinarily large values. Do this along one axis and along all axes orthogonal to it, do something "tame." 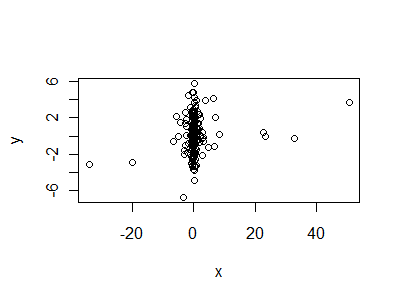 These data can be made "skew" in the technical sense (of a substantial standardized third central moment) simply by extending some of the extreme $x$ values on one side of the plot compared to the other. This will barely change the eigenvectors or the IQRs.

Not the answer you're looking for? Browse other questions tagged distributions skewness or ask your own question.

3
Is Hansen's skewed-$t$ distribution the same as the skewed-$t$ distribution which is a special case of GH Distribution?
3
Incorrect Kurtosis, Skewness and coefficient Bimodality values?
10
Does convex ordering imply right tail dominance?
6
Is the minimum of the Doksum ratio always unbounded?
3
Application of Skewness and Kurtosis
8
Are min$(X_1,\ldots,X_n)$ and min$(X_1Y_1,\ldots,X_nY_n)$ independent for $n$ to infinity?