I ran a multilevel model with a dichotomous variable as the outcome using the logistic link function. I did this with the lme4 package in R. An approximation of my data can be found at this GitHub Gist: https://gist.github.com/markhwhiteii/3a954c4da82efdad5d8abee601b8a6a8

The design of the data collection process is pretty simple: Participants are randomly assigned to a treatment (t) or control (c) condition. They are then asked three questions; they may answer one, two, or three of them. For each of the questions (q1, q2, q3), they can respond positively (1) or negatively (0). I do not necessarily care about the effect of variable—I am considering each question as indicators of more or less the same construct.

The question is simple: Does the treatment increase the probability of responding positively (1)? Importantly, the effect size I want to use is a model-implied percentage point difference between the two groups. This requires transforming predicted values from logits to probability.

The model I specify is an intercept-only model, with the response at Level 1 (denoted by $i$) and the person at Level 2 (donated by $j$):

In the syntax of lme4, this is:

(If you read.csv() in the .csv file in the Gist link above, this code will estimate the model.)

Here is where the confusion rises. I can transform the predicted values for responses in the control condition and those in the treatment condition into probability space. They give me:

This will show about a 0.0003 probability of responding positively in the control condition as well as the treatment condition, or a .03% chance of being positive. The difference between conditions is quite small.

These conditional probabilities in each condition seem too small, especially when we look at the naive percentages of positive responses in both conditions:

This will show that about 22% of the responses in the control condition are positive, while 23% in the treatment condition are positive. My fundamental question is: How is there such a big difference between the 22% or so positive outcomes empirically and only .03% implied from the model?

We get the same thing if we first average by person (to not allow those responding more to have more weight) and then by condition:

Both conditions show about 24% of the responses being positive. Again, this is drastically different than the .03% implied by mod_1.

Some other information that may be helpful: 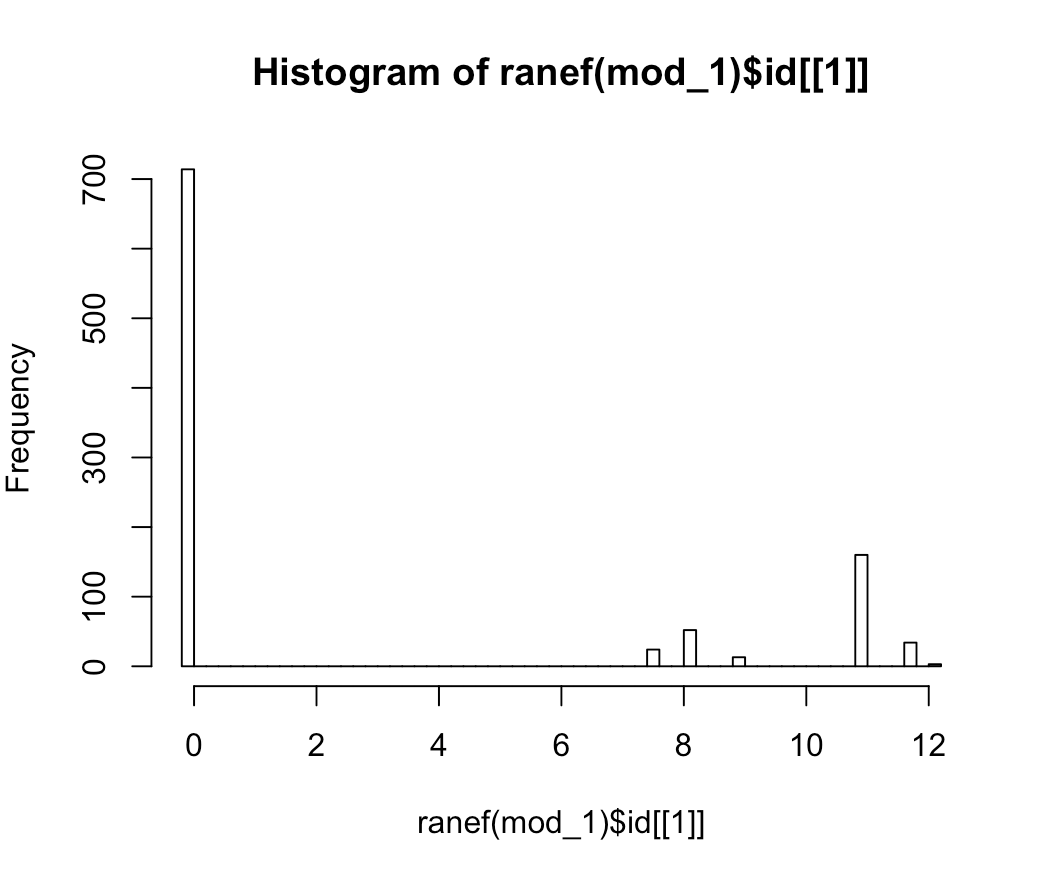 The model clearly seems to be misspecified from that horrific distribution of random intercepts, but I would like to know:

The answer might at least partly be hidden in your answer:

The predicted random effects are all non-negative. Adding them to the linear predictor of the fixed effects will push up the average prediction to the desired level.

So what could be the reason for the non-centered distribution of the eBLUPs? I think it is hidden in the extremely unbalanced data situation: 604 of the 1000 ids provide just one single measurement, which can easily lead to numeric conflicts between random and fixed effects.

In such situations, I often run as a sensitivity analysis a normal mixed-model. If we do this with your data, we get:

The fixed effects now look as expected by the descriptive analysis and very different from what the GLMER found. Now, the eBLUPs are even centered (while of course still far away from a normal):

Depending on your exact research questions and goals of your analysis, you could try generalized estimation equations GEE, in R:

22
Minimum sample size per cluster in a random effect model
6
Do GEE and GLM estimate the same coefficients?
1
Must individuals have more than one observation for repeated measures analyses?