In the chapter, the author tried to demonstrate how to "use probability distributions to numerically describe our beliefs as a range of possible values rather than single values".

The author used the scene in Star Wars: the Empire Strikes Back where Han Solo, attempting to evade enemy fighters, files the Millennium Falcon into an asteroid field as an example.

The author suggested that the posterior (Han making through the asteroid field) is calculated from the C-3PO beliefs (likelihood) and our beliefs in Han's badassery (prior).

Here a summarized of steps the author proposed to calculate the posterior:

"Sir, the possibility of successfully navigating an asteroid field is approximately 3,720 to 1!"

The author suggested to use beta distribution:

Because C-3PO provides the approximate odds of successfully navigating an asteroid field, we know that the data he has gives him only enough information to suggest a range of possible rates of success. To represent that range, we need to look at a distribution of beliefs regarding the probability of success, rather than a single value representing the probability.

Then the author provided the formula:

From what I understand, apply that to the problem mean:

Let RateOfSuccess_likelihood = The success rate of navigating an asteroid field is approximately 3,720 to 1

The author also suggested to use beta distribution to model the prior beliefs.

The author tried to use the formula discussed in previous chapter to calculate the posterior distribution:

Remember, using this proportional form of Bayes' theorem means that our posterior distribution doesn't necessarily sum to 1. But we're lucky because there's an easy way to combine beta distributions that will give us a normalized posterior when all we have is the likelihood and the prior. Combining our two beta distributions - one representing C-3PO's data (the likelihood) and the other our prior belief in Han's ability to survive anything (our prior) - in this way is remarkably easy:

The author comes up with the formula

This is the part where I don't understand. How can the author comes up with the above formula?

Here my attempts to figure out:

which is different with the formula the author come up with.

Help me understand Bayesian prior and posterior distributions

The result formula in these links are similar to that of the author. E.g: 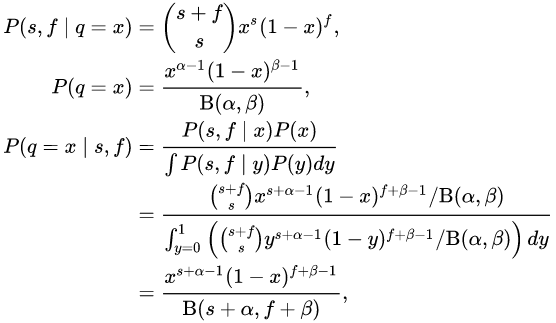 However, in these articles and the others I have found, the likelihood is binomial rather than beta distribution as suggested by the author. Why?

Is the author wrong or the examples in the book and the links I found are different cases? I would appreciate any explanation (i.e. How the author come up with the formula) and/or link to articles mentioned usages of Bayes' theorem and beta distribution likelihood.

(Most of my knowledge in statistics comes from self-education, thus I still have many gaps in understanding concepts that may seem trivial for other people here. So I would be very thankful if answers included less specific terms and more explanation).

Thank you for any help you can provide.

and beta as a prior

then the posterior would be

Maybe, what author means is that C3PO’s distribution is a prior and then the description jumps to describing posterior, while skipping the likelihood part?

Not the answer you're looking for? Browse other questions tagged bayesian prior beta-distribution conjugate-prior or ask your own question.

3
A question on Bayesian updating (Han Solo and the Bayesian priors)
2
Updating Bayesian prior & likelihood for A/B test
0
Bayesian inference with conjugate priors - triplot
1
Estimate Posterior with: Binomial Likelihood with 1/θ Prior
3
Conjugate priors for Gamma distribution of unknown $\alpha$ and $\beta$