I want to ask, what does it mean if the coefficient on $x_i$ increases after the addition of the variable $z_i$?

I just posted an answer here https://stats.stackexchange.com/a/483133/102879 to a similar question, so I thought I would modify it for this one.

Whether you use Stata or any other package is not relevant. Here is R code that anyone can run:

The discrepancy is easily explained by the following graph: 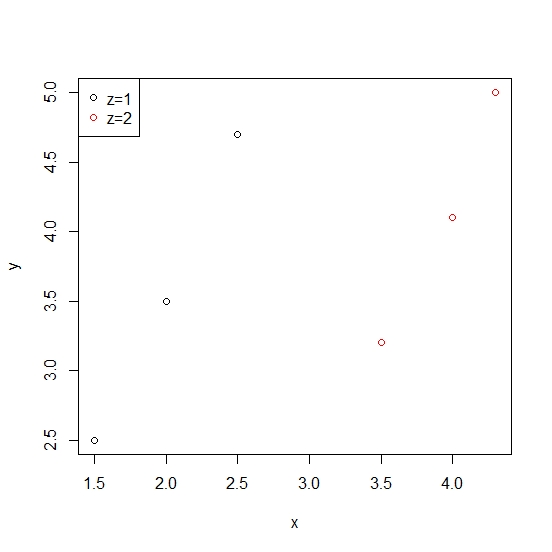 Ignoring the value of z, there is a weak positive trend relating y and x that can be seen in the graph, given by the least squares slope $\hat \beta_1 = 0.5233$. But within levels of z, (ie, fixing z at either 1 or 2), there is a much steeper slope relating y and x, given by $\hat \beta_1 = 2.2016$, which you can think of as kind of an average slope for the two groups. The main difference is in the "held fixed" idea: In the simple regression, z is not held fixed in the interpretation of $\beta_1$. But in the regression with both x and z, $\beta_1$ refers to the effect of x while z is held fixed (at either 1 or 2 in this example).

(A side note: one might think that the slope relating y and x should differ for the two different groups, z=1 and z=2. An assumption of the additive model is that these slopes are exactly the same. You can relax that assumption by including the interaction term z*x in the regression model; this will allow the two slopes to be estimated exactly as if the two groups were analyzed separately.)

Not the answer you're looking for? Browse other questions tagged regression multiple-regression linear or ask your own question.

3
What is the relationship between simply linear and multiple linear regression coefficients?

22
What is the correct way to test for significant differences between coefficients?
3
Is a partial F-Test on a model reduced by only one variable valid?
3
Confused on the interpretation of regression coefficients
5
Can the coefficient of determination $R^2$ be more than one? What is its upper bound?
0
Prediction using fixed effects in glmm
2
Understanding the meaning of the parameters in the linear regression model
4
adding control variables in the regression in the experiment setting
2
Dummy variables interpretation in multiple regression