Suppose that two groups, comprising $n_1$ and $n_2$ each rank a set of 25 items from most to least important. What are the best ways to compare these rankings?

Clearly, it is possible to do 25 Mann-Whitney U tests, but this would result in 25 test results to interpret, which may be too much (and, in strict use, brings up questions of multiple comparisons). It is also not completely clear to me that the ranks satisfy all the assumptions of this test.

I would also be interested in pointers to literature on rating vs. ranking.

Some context: These 25 items all relate to education and the two groups are different types of educators. Both groups are small.

EDIT in response to @ttnphns:

I did not mean to compare the total rank of items in group 1 to group 2 - that would be a constant, as @ttnphns points out. But the rankings in group 1 and group 2 will differ; that is, group 1 may rank item 1 higher than group 2 does.

I could compare them, item by item, getting mean or median rank of each item and doing 25 tests, but i wondered if there was some better way to do this.

I share my thoughts in Details section. I think they are useful in identifying what we really want to achieve.

I think that the main problem here is that you haven't defined what a rank similarity means. Therefore, no one knows which method of measuring the difference between the ranks is better.

Effectively, this leaves us to ambiguously choose a method based on guesses.

What I really suggest is to first define a mathematical optimization objective. Only then we will be sure whether we really know what we want.

My text in Details essentially is a step towards reaching a mathematical definition of ranks similarity. Once we nail this, we can confidently move forward to choose the best method of measuring such similarity.

Based on one of yur comments:

To answer this while strictly interpreting the objective:

One solution here is simply to measure the minimum edit distance. I.e. what are the minimum number of edits that need to be performed on the ranked list of group $a$ such that it becomes identical to that of group $b$.

An edit could be defined as swapping two items, and costs costs $n$ points depending how many hops are needed. So if item $1$ needs to be swapped with item $3$ (in order to achieve identical ranks between those of groups $a$ and $b$), then the cost for this edit is $3$.

But is this method suitable? To answer this, let's look at it a bit deeper:

Once we address the points above, and reach a suitable measure of similarity between two ranks, we will then need to ask more interesting questions, such as:

This sounds like the 'Willcoxon signed-rank test' (wikipedia link). Assuming that the values of your ranks are from the same set (ie [1, 25]) then this is a paired-difference test (with the null-hypothesis being these pairs were picked randomly). NB this is a dis-similarity score!

There are both R and Python implementations linked to in that wiki page.

Warning: it's a great question and I don't know the answer, so this is really more of a "what I would do if I had to":

In this problem there are lots of degrees of freedom and lots of comparisons one can do, but with limited data it's really a matter of aggregating data efficiently. If you don't know what test to run, you can always "invent" one using permutations:

Now do the following:

The problem is that we don't know the distribution of the test statistic under the null that both groups are the same. But if they are the same, we could randomly shuffle observations between groups.

Thus, we can combine the data of two groups, shuffle/permute them, pick the first $n_1$ (number of observations in original group A) observations for group A and the rest for group B. Now compute the test statistic for this sample using the preceding two steps.

Repeat the process around 1000 times, and now use the permutation test statistics as empirical null distribution. This will allow you to compute a p-value, and don't forget to make a nice histogram and draw a line for your test statistic like so: 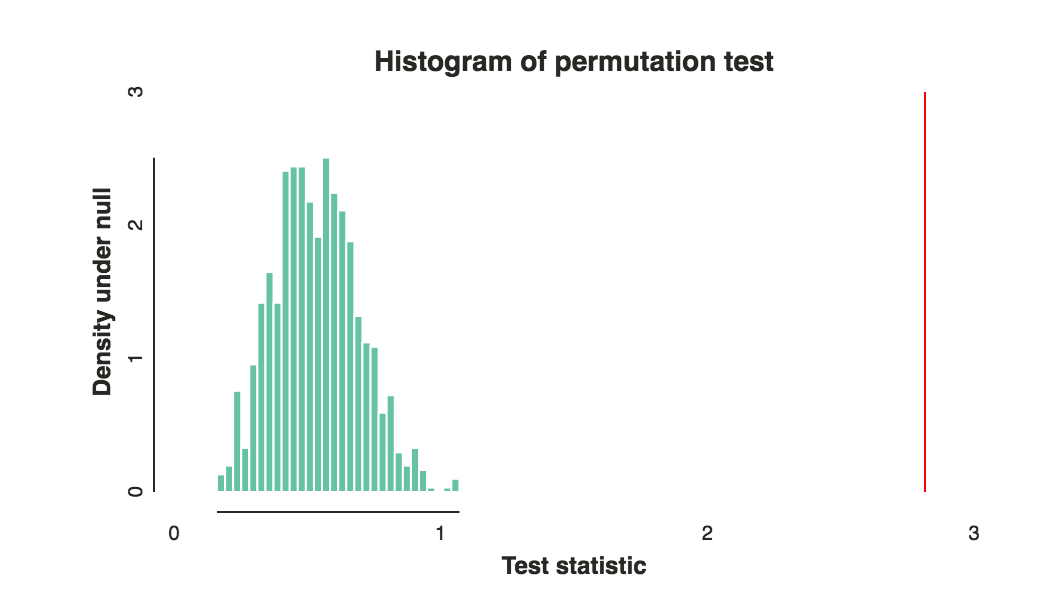 Now of course it is all about choosing the right voting and comparison functions to get good power. That really depends on your goal and intuition, but I think my second suggestion for voting function and the $l_1$ norm are good places to start. Note that these choices can and do make a big difference. The above plot was using the $l_1$ norm and this is the same data with an $l_2$ norm: 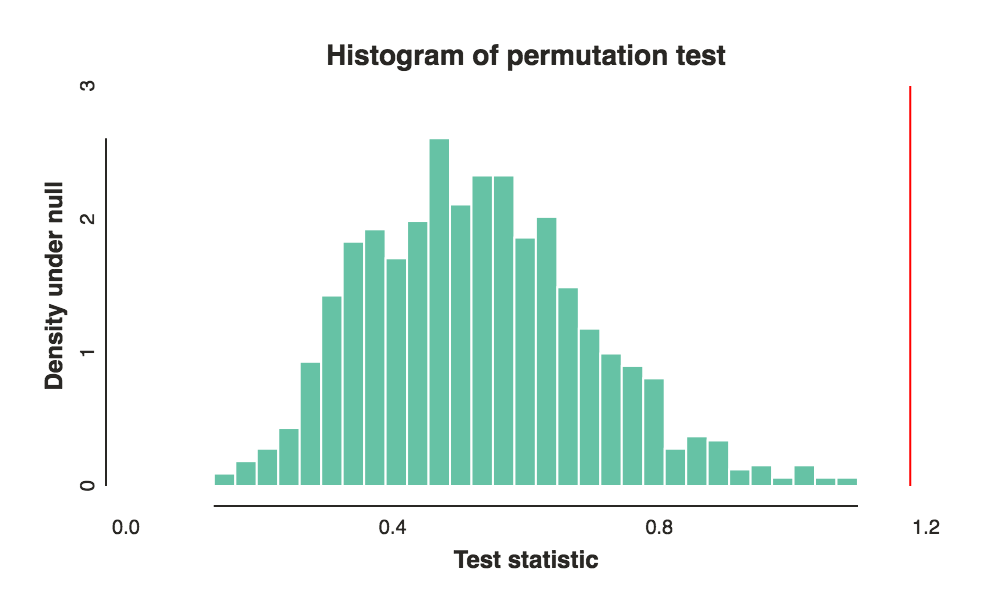 But depending on the setting, I expect there can be a lot of intrinsic randomness and you'll need a fairly large sample size to have a catch-all method work. If you have prior knowledge about specific things you think might be different between the two groups (say specific items), then use that to tailor your two functions. (Of course, the usual do this before you run the test and don't cherry-pick designs till you get something significant applies)

PS shoot me a message if you are interested in my (messy) code. It's a bit too long to add here but I'd be happy to upload it.

In "Sequential rank agreement methods for comparison of ranked lists" Ekstrøm et al. discuss this in detail (including a survey of existing techniques circa 2015) while introducing a new measure called "sequential rank agreement". It's available on arxiv at: https://arxiv.org/pdf/1508.06803.pdf. The abstract says it better than I could:

The comparison of alternative rankings of a set of items is a general and prominent task in applied statistics. Predictor variables are ranked according to magnitude of association with an outcome, prediction models rank subjects according to the personalized risk of an event, and genetic studies rank genes according to their difference in gene expression levels. This article constructs measures of the agreement of two or more ordered lists. We use the standard deviation of the ranks to define a measure of agreement that both provides an intuitive interpretation and can be applied to any number of lists even if some or all are incomplete or censored. The approach can identify change-points in the agreement of the lists and the sequential changes of agreement as a function of the depth of the lists can be compared graphically to a permutation based reference set. The usefulness of these tools are illustrated using gene rankings, and using data from two Danish ovarian cancer studies where we assess the within and between agreement of different statistical classification methods.

As stated in many of the other answers, each of these techniques will provide a different summary of those differences and the selection of which is most appropriate for your application is ... well, ... application specific.

Not the answer you're looking for? Browse other questions tagged ranking group-differences or ask your own question.