In the following DAG: 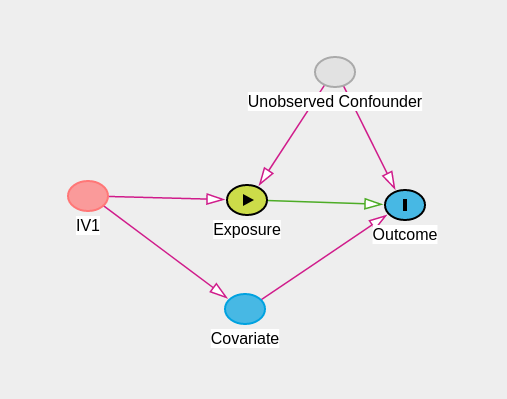 Can I use IV1 as an instrument for exposure?

In the this video at 4:26 the teacher explains a principle of "exclusivity" for instrumental variables.

Cutoff causes outcome only through program

I wonder whether I got that concept right

Among the reservations: in general, there will be an interaction between Covariate and Exposure so there's no such thing as the effect of Exposure there to be estimated. Also, any measurement error in Covariate will mean that adjusting for Covariate isn't completely effective in blocking that path and the exclusion restriction will be violated.

There's an example like this on the Wikipedia page, which also shows how the answer varies with changes in the causal graph.

Not the answer you're looking for? Browse other questions tagged causality instrumental-variables treatment-effect dag causal-diagram or ask your own question.