What statistical test do I need to see if there is a correlation between two different instruments?

I want to do a study to examine if there is a correlation between nursing students' confidence & satisfaction, and their intuitiveness. I have two instruments, The Student Satisfaction and Self-Confidence in Learning questionnaire is a 13 item instrument which uses a five point scale to measure self confidence and satisfaction in nursing students and the Miller Intuitiveness questionnaire, which is an 18 item instrument which uses a six point scale. What statistical test can I use to see if there's a connection between the two?

Edit: I'm leaning towards Spearmans Rank Order correlation, can anyone confirm this is suitable please?

Yes. Spearman's correlation coefficient will probably be a good robust choice as it does not depend on a linear relationship between the variables. There are some nice illustrations in the Wikipedia article.

You should certainly draw pairwise scatterplots to show the three two-way relationships and alert you to any further problems that might suggest you need an alternative approach. For example, in the unlikely event the relationship is like that shown below, any correlation coefficient including Spearman's will be close to zero - a correlation simply can't cope with the situation where the direction of the relationship changes after a key point of maximum marginal return. If this is the case you will have no choice but to use a non-linear model. 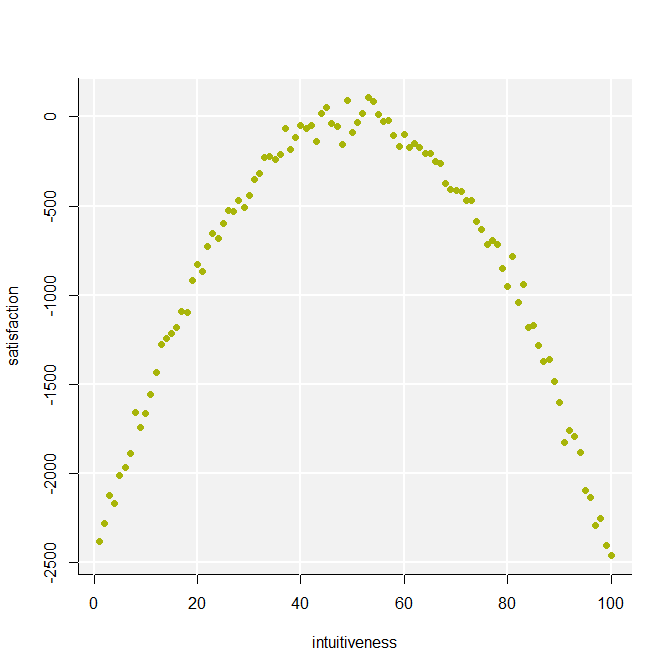 When you want to test for significant evidence a correlation is different from zero, it is best to use a bootstrap. I don't know if SPSS can do this.

You don't need a control group, as you say.

Depending on how far you need to go into this, a more powerful alternative to a correlation coefficient is a model where one of the indexes is the response and the other two are explanatory variables, possibly allowing for an interaction between them. Your choice would depend on your research question.

Final suggestion - you might want to consider randomizing the order they fill in the questionnaires in case this has an impact.

Not the answer you're looking for? Browse other questions tagged hypothesis-testing correlation likert or ask your own question.