An adaptation of the Kullback-Leibler distance?

Look at this picture: 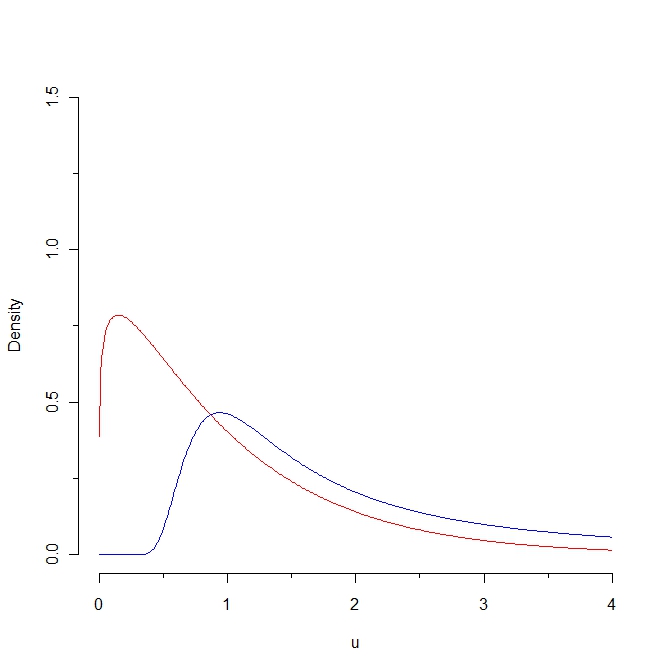 Here is my question: Does it exist an adaptation of the Kullback-Leibler distance that would allow a finite distance between these two curves?

You might look at Chapter 3 of Devroye, Gyorfi, and Lugosi, A Probabilistic Theory of Pattern Recognition, Springer, 1996. See, in particular, the section on $f$-divergences.

where $\lambda$ is a measure that dominates the measures associated with $p$ and $q$ and $f(\cdot)$ is a convex function satisfying $f(1) = 0$. (If $p(x)$ and $q(x)$ are densities with respect to Lebesgue measure, just substitute the notation $dx$ for $\lambda(dx)$ and you're good to go.)

Note that this last one at least gives you a finite answer.

In another little book entitled Density Estimation: The $L_1$ View, Devroye argues strongly for the use of this latter distance due to its many nice invariance properties (among others). This latter book is probably a little harder to get a hold of than the former and, as the title suggests, a bit more specialized.

Addendum: Via this question, I became aware that it appears that the measure that @Didier proposes is (up to a constant) known as the Jensen-Shannon Divergence. If you follow the link to the answer provided in that question, you'll see that it turns out that the square-root of this quantity is actually a metric and was previously recognized in the literature to be a special case of an $f$-divergence. I found it interesting that we seem to have collectively "reinvented" the wheel (rather quickly) via the discussion of this question. The interpretation I gave to it in the comment below @Didier's response was also previously recognized. All around, kind of neat, actually.

Addendum 1 The introduction of the midpoint of $P$ and $Q$ is not arbitrary in the sense that $$ \eta(P,Q)=\min [\kappa(P\mid \cdot)+\kappa(Q\mid \cdot)], $$ where the minimum is over the set of probability measures.

It is hard to characterize this as an "adaptation" of the KL distance, but it does meet the other requirements of being "natural" and finite.

Incidentally, because the KL divergence is not a true "distance," we don't have to worry about preserving all the axiomatic properties of a distance. We can maintain the non-negativity property while making the values finite by applying any monotonic transformation $\mathbb{R_+} \to [0,C]$ for some finite value $C$. The inverse tangent will do fine, for instance.

Searching intrinsic discrepancy (or bayesian reference criterion) will give you some articles on this measure.

In your case, you would just take the KL-divergence which is finite.

Another alternative measure to KL is Hellinger distance

EDIT: clarification, some comments raised suggested that the intrinsic discrepancy will not be finite when one density 0 when the other is not. This is not true if the operation of evaluating the zero density is carried out as a limit $Q\rightarrow 0$ or $P\rightarrow 0$ . The limit is well defined, and it is equal to $0$ for one of the KL divergences, while the other one will diverge. To see this note:

Taking limit as $P\rightarrow 0$ over a region of the integral, the second integral diverges, and the first integral converges to $0$ over this region (assuming the conditions are such that one can interchange limits and integration). This is because $\lim_{z\rightarrow 0} z \log(z) =0$. Because of the symmetry in $P$ and $Q$ the result also holds for $Q$.

Not the answer you're looking for? Browse other questions tagged kullback-leibler or ask your own question.