I have carried out a linear regression. The plot below shows the distribution of the response variable: 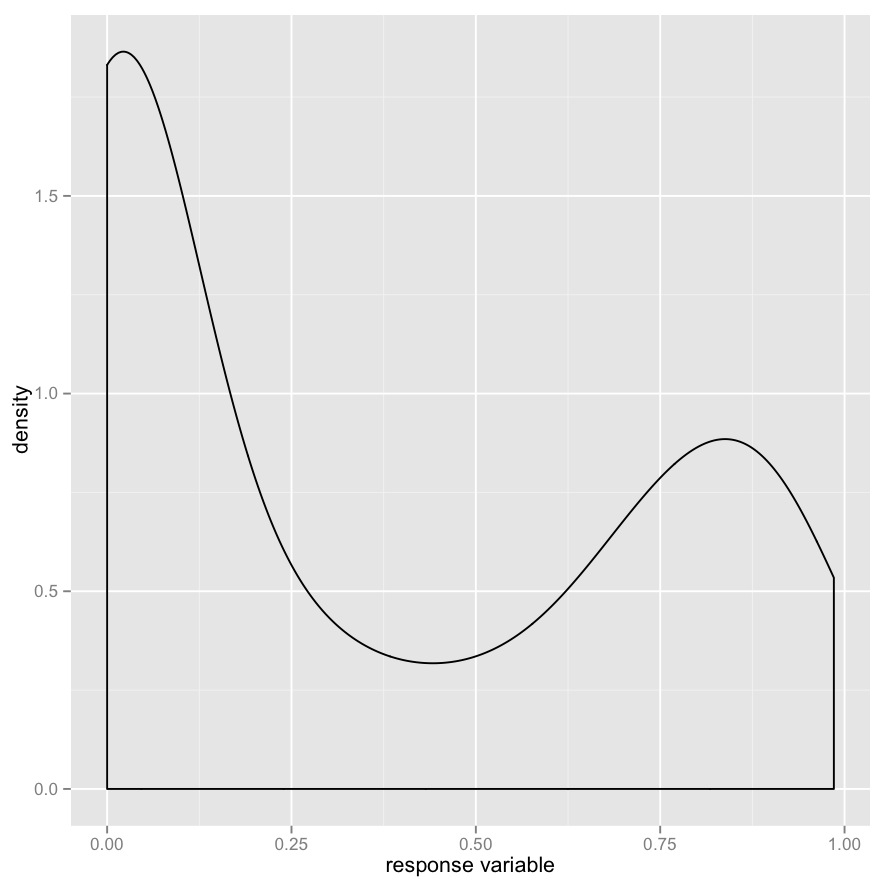 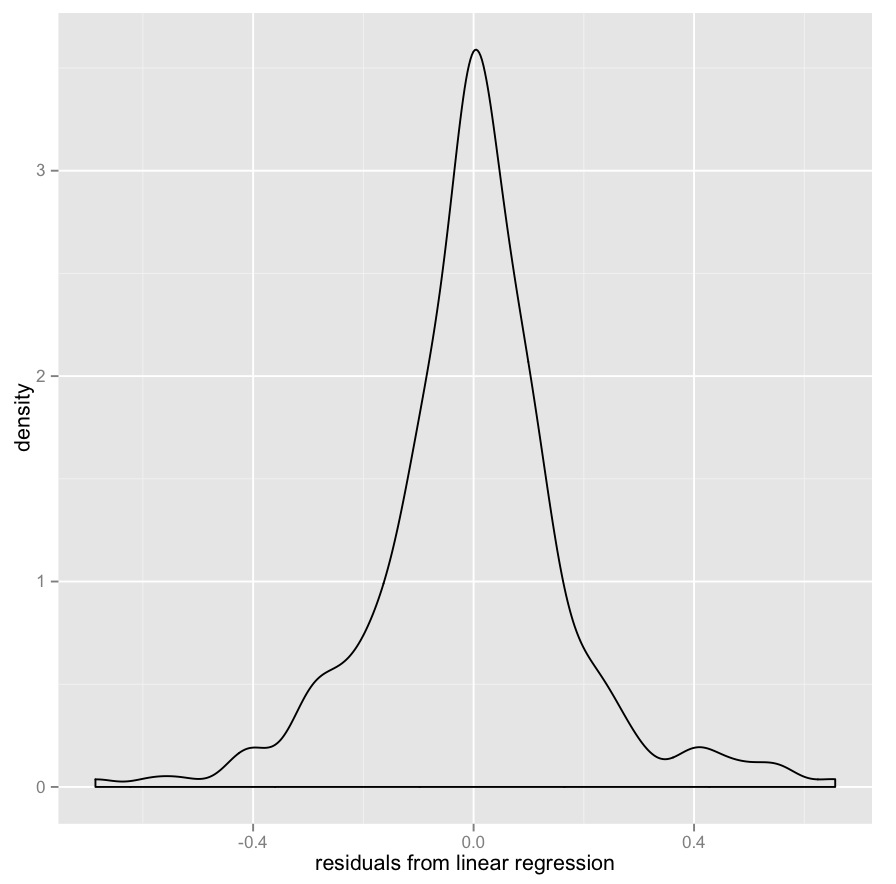 Has my model satisfied the assumptions of linear regression? Might there be a better model to use?

The distribution of the response is irrelevant. Inference based on small samples requires the errors to be approximately normal (better look at the QQ-plot of the residuals than at its density because the tails are important). If you are only interested in descriptive results or if the sample size is not too small, you therefore do not need to worry about normality.

Much more important are the other assumptions of linear regression (correct model structure, no large outliers in the predictors and, if you are interested in inference, homoscedastic and uncorrelated errors).

Your distribution is not beta if your density plot is to be taken at face value. A beta distribution cannot have two modes within (0, 1). However, no density plot for a bounded variable (at a guess here from some kernel density estimation procedure) can be taken at face value unless the estimation includes adjustments for boundary artefacts, which is not typical. But, as it were, we see what you mean.

However, to focus on the major issues:

Note: The exact form of your density plot for the response is a side-issue, so I will make this an added note. It's clear that the density for a variable bounded by 0 and 1 must average 1. Your graph has a useful reference line density at 1. Visually comparing the bump above 1 on the left with the area to its right underlines that some of the density has been smoothed away by the procedure beyond the support and discarded. That is, the graph shown truncates the display: the smoothed distribution has positive density below 0 or above 1, which is not shown. There are known ways to smooth a bounded variable more respectfully, in this case including (a) to smooth logit of the variable and back-transform the density (a little problematic if observed values include 0 or 1), or (b) to reflect density inwards at the extremes. Naturally, there is scope for disagreement about whether this is trivial or secondary on the one hand or incorrect on the other. (I'd rather see a quantile plot of the data, but I'll not expand on that.)

Strictly speaking, the normality of residuals assumption is not needed for OLS to work, it becomes an issue especially in hypothesis testing. Since your residuals actually seem to be normally distributed, you're fine even in this area. Additionally, OLS does not assume anything about the distribution of variables so you do not have to worry about that.

Although the other answers have already addressed the question, I would like to add another powerful option that would solve most of the problems related to the distribution-assumptions: quantile regression.

Depending on the research interests, this method can be extremely powerful.

As someone has already said before, if you are merely interested in estimating the marginal mean (or any quantile) of your outcome then you don't need to worry about any assumption at all, as both quantile and ordinary regression methods perfectly estimate it.

If you are interested in inference, ordinary regression has a couple of problems with the distribution assumptions, whereas the quantile doesn't because it is distribution free. It's true that you can try using mean regression and robust estimators, but personally I prefer quantile regression, which is by the way even more informative (because you can estimate the whole conditional distribution of the outcome instead of just one of its summary indicators, the mean).

If you are interested in both prediction and inference, then the quantile's property of invariance is quite handy. For example, suppose you are working with probabilities, or rates (or any other "bounded" outcome). With quantile regression you can transform the outcome Y so that it's transformation is not bounded (for example, using a logit or probit function), model logit(Y) and use the same model for predictions and inference.

With ordinary methods it's not so easy, because of Jensen's inequality: E(g(Y)) is never equal to g(E(Y)).

Therefore, you either use two models (one for the prediction, one for the association) or you must use other methods (beta regression, logit normal regression) that, however, have problems related to respectively parameter interpretation and distribution assumptions.

Finally, there can always be problems related to the linearity assumption or independent data. In the former, we can solve the problem by adding splines (which, though, complicate the interpretation of parameters).

For the latter, instead, mixed effect regression models could help us (if we have hierarchical or longitudinal data).

Not the answer you're looking for? Browse other questions tagged regression residuals assumptions or ask your own question.

0
Linear Regression on Boston Housing Price?
130
What if residuals are normally distributed, but y is not?
17
How do I perform a regression on non-normal data which remain non-normal when transformed?
6
State of the art: Non-parametric density estimation with a boundary and data clumped near zero
2
Linear regression response variable far way from Gaussian