Can anyone clarify the concept of a “sum of random variables”

In my probability class the terms "sums of random variables" is constantly used. However, I'm stuck on what exactly that means?

A physical, intuitive model of a random variable is to write down the name of every member of a population on one or more slips of paper--"tickets"--and put those tickets into a box. The process of thoroughly mixing the contents of the box, followed by blindly pulling out one ticket--exactly as in a lottery--models randomness. Non-uniform probabilities are modeled by introducing variable numbers of tickets in the box: more tickets for the more probable members, fewer for the less probable.

A random variable is a number associated with each member of the population. (Therefore, for consistency, every ticket for a given member has to have the same number written on it.) Multiple random variables are modeled by reserving spaces on the tickets for more than one number. We usually give those spaces names like $X,$ $Y,$ and $Z$. The sum of those random variables is the usual sum: reserve a new space on every ticket for the sum, read off the values of $X,$ $Y,$ etc. on each ticket, and write their sum in that new space. This is a consistent way of writing numbers on the tickets, so it's another random variable. 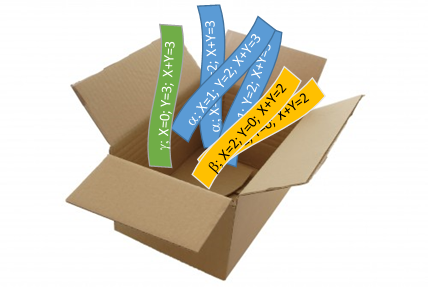 The beauty of this approach is that all the paradoxical parts of the question turn out to be correct:

In this fashion the sum can simultaneously have a definite value (given by the rules of addition as applied to numbers on each of the tickets) while the realization--which will be a ticket drawn from the box--does not have a value until it is carried out.

This physical model of drawing tickets from a box is adopted in the theoretical literature and made rigorous with the definitions of sample space (the population), sigma algebras (with their associated probability measures), and random variables as measurable functions defined on the sample space.

None of these answers gives a mathematically rigorous way to think about sum of random variable. Note that $X,Y$ needs not to be defined on the same outcome domain and even if they do, $X+Y$ cannot be understood as summing up two functions. Rather, they should be first extended to the domain $\Omega_1\times \Omega_2$. For example, let $X,Y$ be identical function of $\Omega=\{Head,Tail\}$ where $X(Head)=Y(Head)=1, X(Tail)=Y(Tail)=0$. Domain of $(X+Y)$ should be {(Head,Tail),(Tail,Head),(Head, Head),(Tail,Tail)}. Now $X,Y$ are functions on this product space where their value is determined solely by the 1st and 2nd coordinate respectively. The sum now can be understood as summation of functions as the usual sense. Note also that the $\sigma-$field and probability measure should also be defined anew. Saying $X,Y$ are independent is one way to specify the product measure.

Not the answer you're looking for? Browse other questions tagged probability self-study random-variable terminology or ask your own question.

2
Sum of Discrete Random Variables
85
What is meant by a “random variable”?
168
Why do we need sigma-algebras to define probability spaces?
48
Why is the sum of two random variables a convolution?
23
Empirical CDF vs CDF
28
In layman's terms what is the difference between a model and a distribution?
13
Why is $x + x = 2x$, but $X + X \neq 2X$?
18
Are “random sample” and “iid random variable” synonyms?
7
How to interpret sum of two random variables that cross domains?
9
Why do you have to provide a variogram model when you are kriging?
See more linked questions