First of all, sorry for the huge pictures, but I'm in desperate need of some input and help on the results following a study. I'm trying to interpret the results from my study, but I can't quite figure out what causes some of the positive correlations to turn into negative coefficients in the regression analysis. 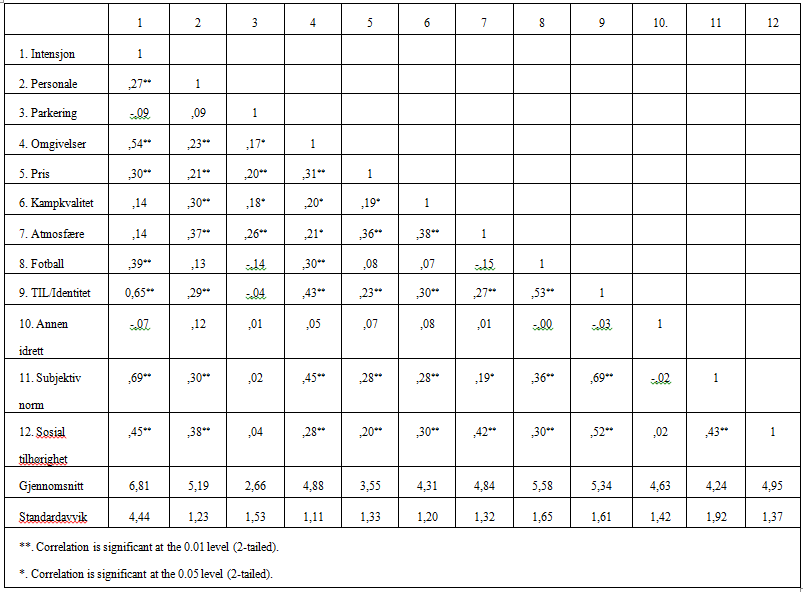 As you can see there are positive correlations between "atmosfære", "kampkvalitet", "fotball" and the dependent variable "intensjon". What I don't understand is how these three independent variables end up with negative coefficients in the following regression analysis. Considering VIF-values are low, which indicates low multicollinearity, I can't seem to wrap my head around this.

Some thoughts and input that might help me along the way? Much obliged!

You have several issues.

For one, these three coefficients are not significant, basically, indistinguishable from zeros at 95% confidence (see the t-stats).

Second, two of your correlations are also not significant, i.e. indistinguishable from zeros.

Third, your correlations are unconditional, i.e. they do not take into account what's going on with other variables. Imagine this, you have two variables: age and sex (1-male, 0- female). Your dependent is salary. So, you compute correlation of salary and sex, and it comes negative. It surprises you.

In the regression, the coefficients are estimated controlling for the other variables. In the correlations, they are not. These are two different questions and, so, they can get two different answers.

If all the variables were perfectly orthogonal to each other, this would not be possible. But they are not (they almost never are, certainly not in any observational study).

For example, take the atmos variable (it has different names in the two runs, I am assuming this is the same variable). It is correlated 0.14 with intention, but has a -0.33 coefficient in the regression. Why? Well, it is also correlated with all the other variables - and in 8 cases, the correlation is rather large.

The regression has to partition the variance. Once it accounts for the variance due to the other variables, the relationship between atmos and intention changes.

Not the answer you're looking for? Browse other questions tagged correlation regression-coefficients or ask your own question.