Are two asymptotic values enough to fail the test of normality?

Looking at this post I started to wonder about the gestalt interpretation of the QQ plots generated by qqnorm in R. Here's the plot to avoid having to go to the linked post: 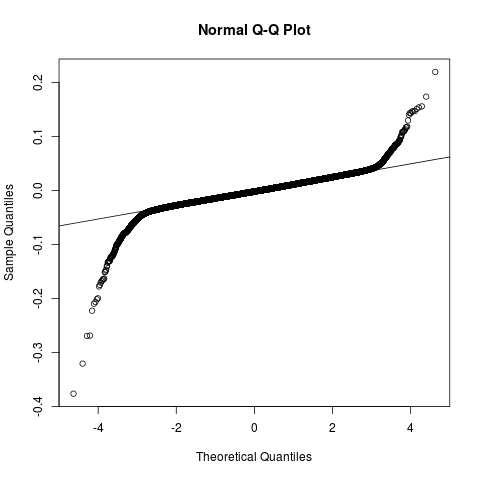 First off, the $y$ axis reads "quantiles", but these are not quantiles, but rather equally spaced values containing very few data points towards the ends. The plot also struck me as too horizontal to be interpreted in a gestalt fashion as a "heavy-tail" distribution.

So I ran a quick "convincing-myself" test with R: To a $\small 500$ sample from a standard normal distribution, I added just a couple of asymptotic values $\small -10$ and $\small 10$. Just $\small 2$ data points: x <- c(rnorm(500),-10, 10). My thinking was that these two values couldn't possibly change our opinion - clearly the bulk of the data were normal by design. This was the obvious plot before introducing the -10, 10: 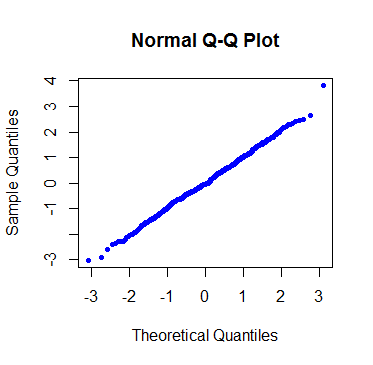 Two loose, possibly mistaken, values wouldn't make a dent. However, the plot was again "heavy-tailed" (not so unexpected now, given the observation on the $y$ axis construction): 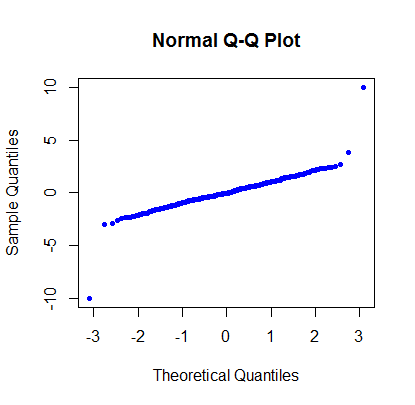 ... a ridiculously caricatured version of the first plot. My thought was that this could represent a well-known anomaly in some cases, warranting correcting. Surely statisticians must be in the habit of getting rid of these outliers... The most surprising part came when a Shapiro-Wilk test also seemed to comfortably rule out normality just because of these two values:

I guess this is consistent with the interpretation of the boxplot:

"If the box plot for the given data has outliers on both sides and has tails longer than the length of the box, then the data is said to have heavy-tailed distribution." An Insight Into Heavy-Tailed Distribution. Annapurna Ravi, Journal of Mathematical Sciences & Mathematics Education, Vol.5, No.1.

Are these essentially normal data no longer consistent with a normal distribution simply because of $2$ outliers? Can the new data be considered "heavy-tailed" because of these two dots sticking out at either end of the otherwise flat and straight QQ plot? And is this consistent with the mathematical definition of heavy tails?

The first plot looks to me quite similar to a mixture of a normal (most of the points) and something with larger variance and somewhat heavier tail (perhaps a 90-10 mixture but it's hard to judge) -- and possibly a slightly lower center. Of course, that doesn't mean the original process is physically a mixture of two original processes; you can get exactly the same appearance with something that has a distribution close to the distribution function of that mixture.

* (such as choose a better model, or a more robust methodology; if I was using a Wilcoxon-Mann-Whitney test on a pair of samples like that I might not care at all),

The most surprising part came when a Shapiro-Wilk test also seemed to comfortably rule out normality just because of these two values:

That wasn't remotely surprising to me, since they will dramatically affect the correlation in the plot, which directly impacts the closely-related Shapiro-Francia statistic (if my recollection is correct, you can regard it as a function of $R^2$ in the QQ-plot -- or possibly it is $R^2$, and it's also typically very close to the Shapiro-Wilk). So in fact I'd be surprised if two such large outliers didn't cause the Shapiro-Wilk to be significant given how big the sample is.

In fact I was playing with much larger samples just recently (yesterday? I think it was) with only a single outlier where the squared-correlation in the corresponding plot was really quite close to 0.

then the data is said to have heavy-tailed distribution

Said by whom? Presumably the author of that sentence. (He either needs to say who is saying it, or own it as his own definition.)

It seems a somewhat odd definition, but okay, he can define it that way if he wants.

(By the look of it, that journal badly needs a decent editor)

Are these essentially normal data no longer consistent with a normal distribution simply because of 2 outliers?

You may well ask how much impact does it have on whatever thing you're interested in. For some things the impact may be great for other things it may be small, but normal populations have almost no chance of producing a sample like that.

Can the new data be considered "heavy-tailed" because of these two dots sticking out at either end of the otherwise flat and straight QQ plot?

A distribution that is likely to produce a sample like that would be called heavy tailed. We might also reasonably refer to the ecdf of that sample as 'heavy tailed'.

And is this consistent with the mathematical definition of heavy tails?

Which definition are we talking about?

Note that the ecdf doesn't have any values at all beyond the largest and smallest sample values; if you have a definition of heavy tailed that talks about limiting behavior of the tail of (say) the survivor function (on the right, and perhaps the cdf on the left), it might not be heavy tailed at all ... but the distribution from which the sample was drawn might -- or might not -- be heavy tailed by the same definition, depending on what the actual distribution was and what the definition of heavy-tailed was.

Are these essentially normal data no longer consistent with a normal distribution simply because of 2 outliers?

The plot clearly shows two extreme outliers, & that's reason enough to doubt that the data-generating process is well modelled by a normal distribution. Tests specifically designed for outlier detection may have more power to detect them than general-purpose normality tests, but that's not to say the latter won't or shouldn't.

It depends. If you want to model the data-generating process in a strict sense then you wouldn't. (If no brand-name distribution seems appropriate, you might use the empirical distribution function, perhaps smoothed.) Often you want to model a slightly idealized version in which people don't write decimal points in the wrong place or use dirty test-tubes. Sometimes you might want to model just those data that fit a model you like, which can be rather more contentious. See Rigorous definition of an outlier?, Can data cleaning worsen the results of statistical analysis?, Removing outliers from data - maximum number of outliers that you can remove? & the outlier tag. And if you're not really interested in the whole distribution for its own sake you could use procedures robust to the presence of outliers to answer the questions you do care about.

Can the new data be considered "heavy-tailed" because of these two dots sticking out at either end of the otherwise flat and straight QQ plot? And is this consistent with the mathematical definition of heavy tails?

The spacing between the last two extreme values of a tail of a distribution is robust and has been used to measure tail heaviness here. Edit: In other words, yes, two widely spaced adjacent extreme values in either tail are enough to yield a low probability of normality. However, a distribution can be non-normal, as the Q-Q plot below shows 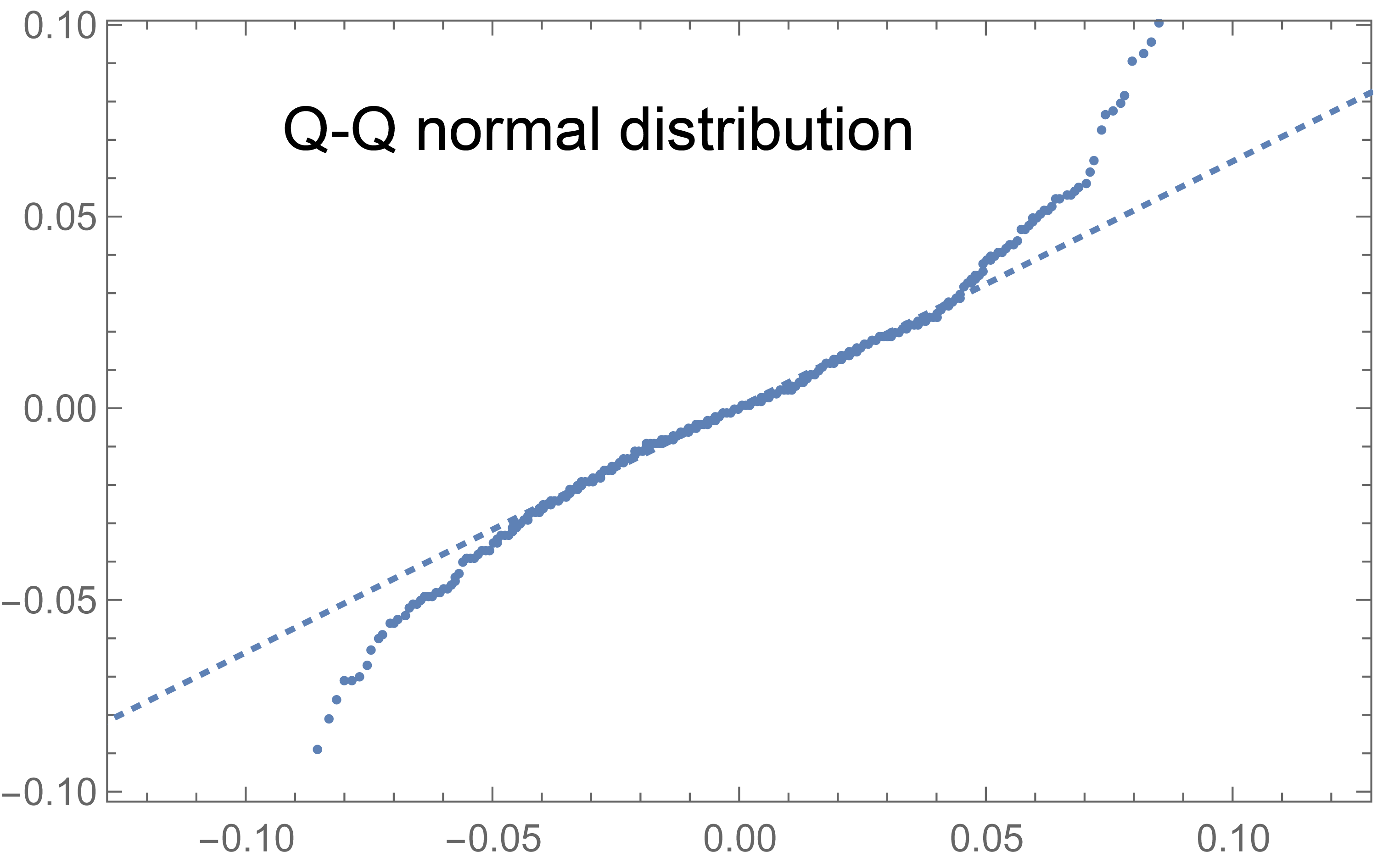 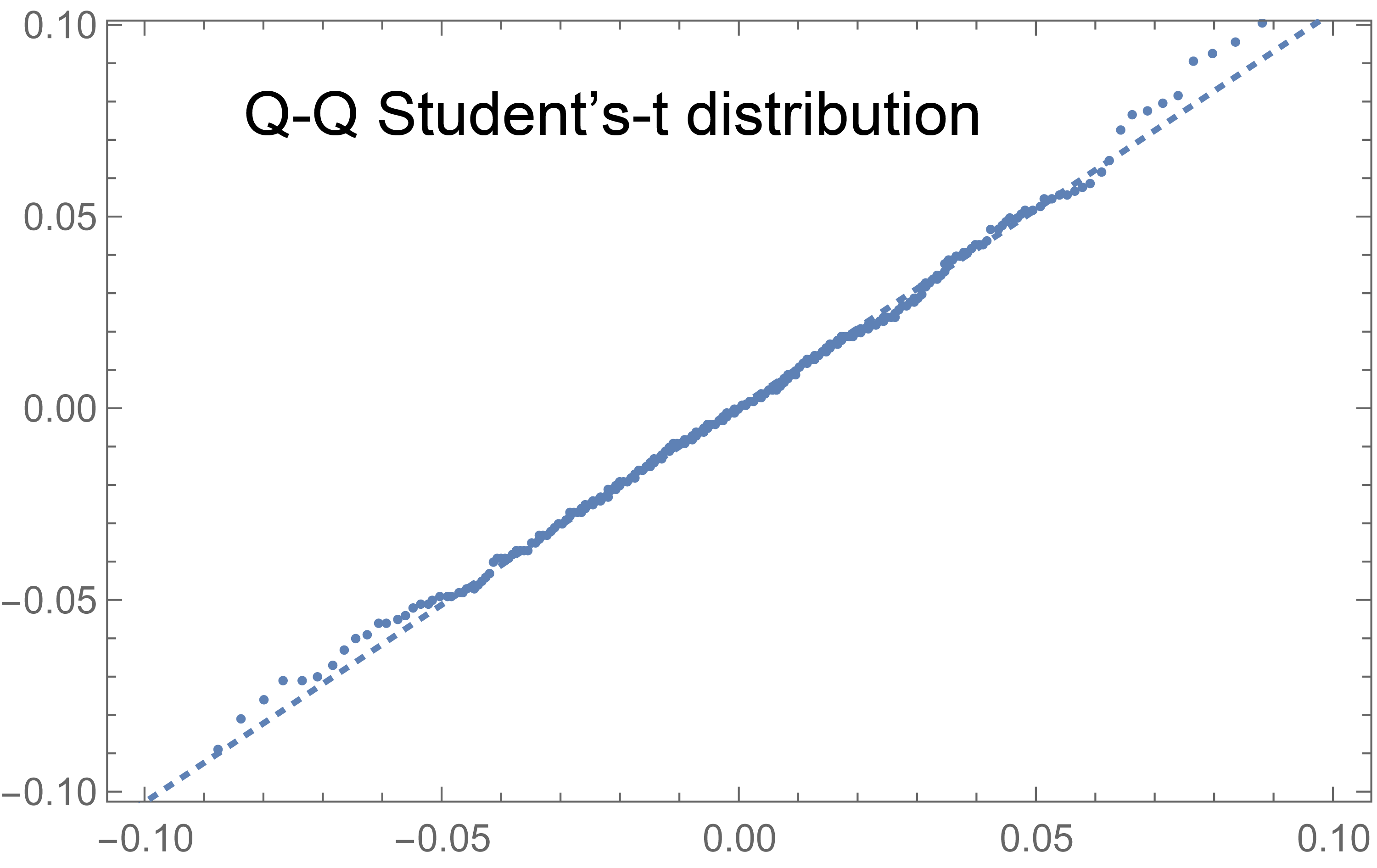 Not the answer you're looking for? Browse other questions tagged normality-assumption qq-plot heavy-tailed or ask your own question.

222
How to interpret a QQ plot
46
Rigorous definition of an outlier?
19
Can data cleaning worsen the results of statistical analysis?
14
Example of heavy-tailed distribution that is not long-tailed
9
Removing outliers from data - maximum number of outliers that you can remove?
5
Is there a way to correct for continuity for the Shapiro-Wilk test?
6
Meaning of Qqnorm plot in R

9
Asymptotic normality of order statistic of heavy tailed distributions
1
A question about qqplot
0
Appropriate to fit lognormal model to data with heavy tail?
0
What is the best way to assess normality in a large dataset?
1
Interpreting QQ plot (Normal vs Heavy-tailed)