As per Glen's suggestion, suppose we have a sample size of 200.

create a distribution from these data, and

There are an infinite number of possible distributions that would be consistent with those sample quantities.

In the absence of some likely unjustified assumptions, not in general - at least not with much sense that it will be meaningful. The results will depend largely on your assumptions (there's not much information in the values themselves, though some particular arrangements do impart some useful information - see below).

It's not hard to come up with situations where the answers on the proportion question may be very different. When there are very different possible answers consistent with the information how would you know which situation you're in?

More details may give helpful clues but as it stands (without even a sample size, though it's presumably at least 2, or 3 if the mean isn't halfway between the endpoints*) you won't necessarily get much of value on that question. You can try to get bounds, but in many cases they won't narrow things down a lot.

* actually if the mean is close to one endpoint you can get some lower bound on sample size. For example if instead of 10,20,25 for your min/mean/max you had 10 24 25 then $n$ would have to be at least 15, and it would also suggest that most of the population was above 24; that's something. But if it were say 10,18,25 it's much harder to get a useful idea of what the sample size might be, let alone the proportion below the mean.

As already noted by Glen_b, there is infinitely many possibilities. Take a look at the following plots, they show eight different distributions that have the same min, max and mean. 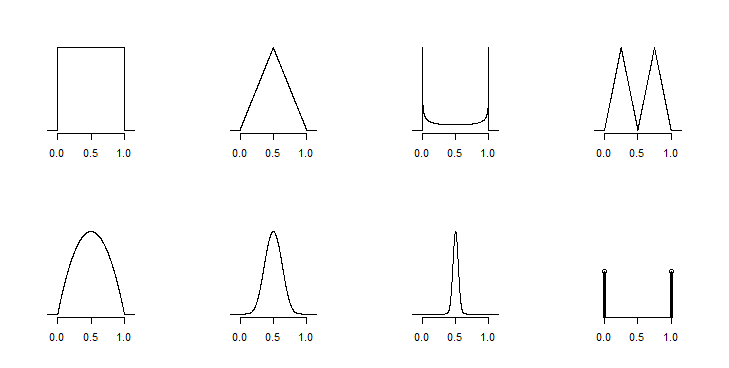 Notice that they are very different from each other. First is uniform, forth is a bimodal mixture of triangular distributions, seventh has most probability mass concentrated around the center, but still min and max are possible with very small probability, eight is discrete and has only two values at min and at max, etc.

Since they all meet your criteria, you can use any of them for simulation. However your subjective choice would have very profound result on the outcome of simulation. What I want to say is that if min, max and mean is really the only thing that you know about the distribution, then you have insufficient information to conduct the simulation if you want it really to mimic the real (unknown) distribution.

So you need to ask yourself what do you know about the distribution? Is it discrete or continuous? Symmetric or skewed? Unimodal or bimodal? There is lots of things to consider. If it's continuous, non-uniform and unimodal, and you know only the min, max and mean, then one possible choice is triangular distribution -- it's highly unlikely that anything in real life has such distribution, but at least you are using something simple and not imposing too many assumptions about it's shape.

A range-based rule for calculating the standard deviation is widely cited in the statistical literature (here is one reference ... http://statistics.about.com/od/Descriptive-Statistics/a/Range-Rule-For-Standard-Deviation.htm). Basically, it is (max-min)/4. It is known to be a very rough estimate.

A rough coefficient of variation could also be produced by taking the ratio of the SD/Mean. This would provide a proxy for the unitless variability in the data.

Error more properly refers to the sampling distribution of the population and requires a statement of the sample size, n, for estimation. Your description does not provide this detail.

Not the answer you're looking for? Browse other questions tagged distributions standard-deviation mean extreme-value or ask your own question.

0
How to determine distribution from Sleep data min/max/mean values in R?
6
How do I generate distribution of positive numbers only with min, max and mean?
-1
Is there non-distribution (without any distribution rule) data?
0
Apply normality assumption on limited sample size
0
Can I perform typical Bayesian contrast analysis, if my data takes the form of quantiles?

1
How to calculate max/min scales on a scatter plot
3
Assessing deviation from the mean without Chebyshev's inequality
0
Clustering using using min,max,mean and standard deviation
3
Calculating the parameters of a negative binomial distribution given a mean and high density intervals
3
Calculating a confidence interval for the min/max of a distribution when sample may not reflect the underlying distribution
0
Maximum possible percentage above a sample mean
2
Estimating the min and max of a distribution
2
Is there something conceptually wrong with calculating the mean of minimum values?