I have a question. In a study that I am acquainted with, the goal is to test for the effectiveness of a new psychotherapy method. The dependent variable is stress as assessed per PSQ (Perceived stress questionnaire).

If I want to look for differences between various groups (e.g. sex, education, experience with psychotherapy etc.) after the psychotherapy, does it make sense to study CHANGES between two time points (t2-t1) or do I have to inspect every data point on its own.

So can I for example calculate an independent t-test between males and females with CHANGES OF STRESS as a dependent variable, so not the stress score per se but the change of it between the two time points. Do you know what I mean, does my question make sense? And is the measurement level of stress score CHANGE also at least interval scale just as the Perceived stress score itself?

I hope my question makes sense. :)

Thanks a lot already in advance

I think you are asking whether a paired t test is the same thing as a one-sample t test on the paired differences. If so, the answer is Yes.

In the case of actual experimental data, you would see before and after as you look at test scores, and increase would be available only on upon taking differences. [Please ignore the variable increase used only for simulation; it is the same as diff/]

Datapoints for the first six of 100 simulated subjects are as follows:

We show a stripchart (dotplot) of diff. Over 3/4, but not all, of the subjects show positive differences. [For our purposes, individual graphs of before and after are not useful; they would not show pairing and so might be misleading.] 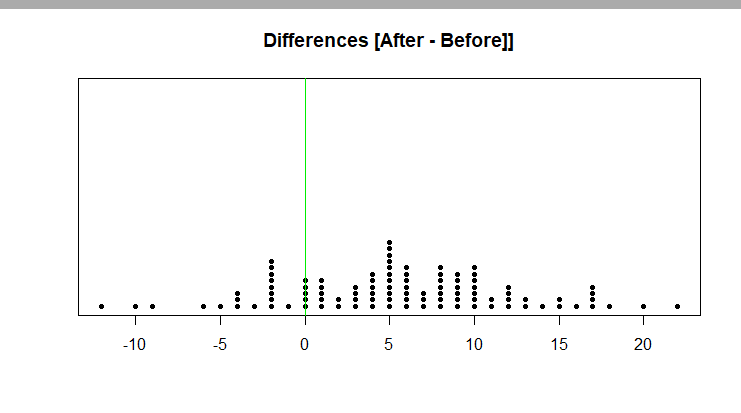 The correlation $r$ between 'before' and 'after' is nearly $1$ and a scatterplot shows a nearly linear pattern for pairs. Points below the 45-degree line correspond to subjects that showed no improvement. 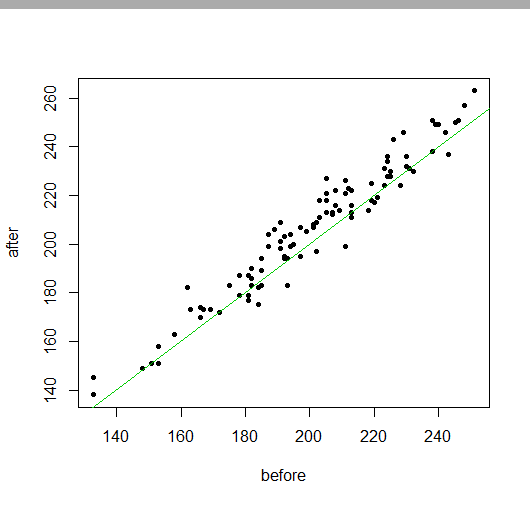 Tests. Now we compare results from two t tests in R: (a) a paired test for before and after and (b) a one-sample t test for diff. Notice that results are the same: the t statistic 8.3978, estimated improvement 5.53, and (very small) P-value 3.347e-13 are identical between the two tests.

Incorrect two-sample t tests. However, if you were incorrectly to do a two-sample t test, then the before and after are treated as two independent samples ('pairing' is ignored), and results of the test are substantially different---both numerically and in format.

The 'Welch' t test, which does not assume equal variances, is shown in full; only the P-value of the 'pooled' t test is shown. Neither of these incorrect tests shows a significant difference between 'before' and 'after'.

Note on nonparametric tests: If data are not normal, you may choose to use a Wicoxon signed-rank test to judge whether differences are mostly positive. Equivalently, you might do a paired test on After and Before.

However, it would be incorrect to do a two-sample Mann-Whitney-Wilcoxon rank sum test as if Before and After were two independent samples.

Not the answer you're looking for? Browse other questions tagged t-test or ask your own question.

2
What level of measurement is a factor score?
2
The result of absolute change and relative change in t test is different
5
T-tests, manova or logistic regression - how to compare two groups?
2
When to use t-test for dependent vs. independent sample?
3
no effect for t-tests but for correlations - in search for a reason
0
Help explaining to collegue problems with his data analysis for a pre-post group design
1
Data analysis: 2 groups but all ratings from the same (two) individual(s)
0
ANOVA vs. t-tests (yet again)