% chance, when the success rate goes up with every failure

In an online game the chance of succeeding at an action starts at 5% and goes up 5% every time the action fails.

Upon success the chance resets back to 5%.

(So you know how they say a die has no memory of prior rolls? Here it does.)

The question: How many attempts do I need to have a 50/50 chance of success?

Alternate question: What fixed percent chance would duplicate the overall success rate of this system? (Over many rolls.)

This probability tree represents the game and guides the calculations: 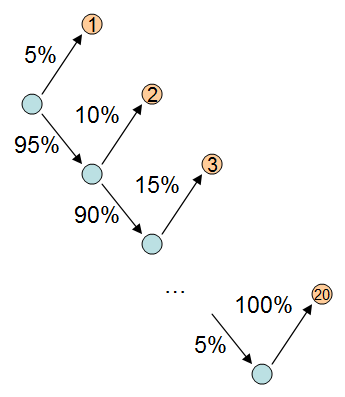 The blue node at the left represents the start. At this point there is a 5% chance of success (leading to the up and left). If success is achieved now, only one attempt is made, as indicated in the orange circle.

By carrying out all the multiplications we compute the chances of success after exactly $k$ attempts for $k=1, 2, \ldots, 20$:

A similar probability tree can help answer any similar questions where the value of $5$% may differ and can even change from one attempt to the next: just write in the appropriate probabilities and do comparable calculations.

Make a 19-state Markov chain and solve for its stationary distribution, then look at the probability of the first state. This will be the long-term expected number of successes per mouse click.

Not the answer you're looking for? Browse other questions tagged probability distributions conditional-probability odds or ask your own question.

2
Modeling success rate with gaussian distribution
11
Designing a test for a psychic who says he can influence dice rolls
3
Chance of collisions between random numbers when inserting into set
4
Probability of Rolling a number that changes over time on One Die
23
What's the probability that from 25 random numbers between 1 and 100, the highest appears more than once?
0
Chances of an event happening with a increasing chance per failure
2
Random Walk or Gambler's Ruin