Attempt: Please check if the below is correct.

The idea's right--but there's a question of expressing it a little more rigorously. I will therefore focus on notation and on exposing the essence of the idea.

Let's begin with the idea of exchangeability:

because (in the first inequality) we have merely replaced $\mathbf X$ by the identically distributed vector $\mathbf X^\sigma.$ This is the crux of the matter.

This gives us a situation like the picture below: 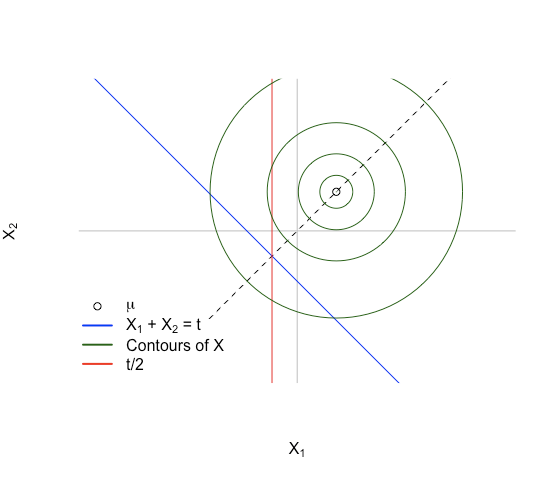 In higher dimensions this gets hard (or impossible) to exactly visualize, but the same idea applies: we've got a spherical Gaussian with a mean in the span of $\one$, and we're looking at an affine subspace that's perpendicular to that. The balance point of the distribution on the subspace will still be the intersection of $\text{span }\one$ and $\{x : x^T\one = t\}$ which is at $x=(t/n, \dots, t/n)$, and the density is still symmetric so this balance point is again the mean.

Again, that's not a proof, but I think it gives a decent idea of why you'd expect this behavior in the first place. 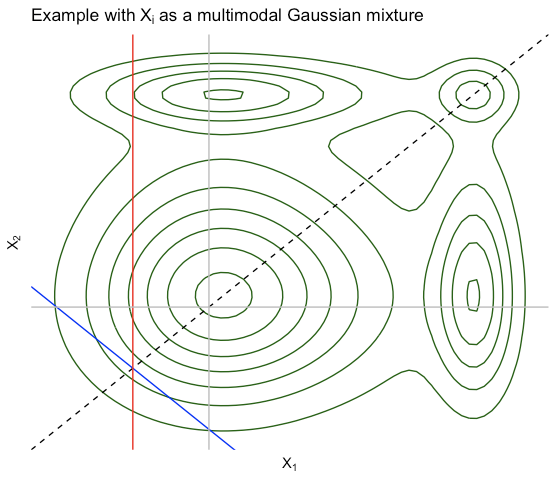 I think your answer is right, although I'm not entirely sure about the killer line in your proof, about it being true "because they are i.i.d". A more wordy way to the same solution is as follows:

Think about what $\mathbb{E}(x_{i}|T)$ actually means. You know that you have a sample with N readings and that their mean is T. What this actually means, is that now, the underlying distribution they were sampled from no longer matters (you'll notice you at no point used the fact it was sampled from a Gaussian in your proof).

$\mathbb{E}(x_{i}|T)$ is the answer to the question, if you sampled from your sample, with replacement many times, what would be the average you obtained. This is the sum over all the possible values, multiplied by their probability, or $\sum_{i=1}^{N}\frac{1}{N}x_{i}$ which equals T.

Not the answer you're looking for? Browse other questions tagged probability self-study mathematical-statistics conditional-probability conditional-expectation or ask your own question.