What is the distribution of a Poisson variable, where the Poisson rate is Normal (or Binomial)?

In biology, next-generation sequencing is often used to quantify the level of RNA in a cell. The experiment goes like this:

Imagine that a cell (or a extract made from many cells), is a mixed bag of 200,000 RNAs molecules from 20,000 classes. We wish to estimate the proportions of the various classes.

For each replicate of an experiment we sample, with replacement, RNA "reads" from the bag.

For a class of RNA we get a count of "reads".

If X is the count of "reads" from a particular replicate of the experiment, in practice we often model X as being negatively binomial as when we look at it, it looks like an overdispersed poisson.

There has been some discussion recently if their is any theoretical basis behind using the negative bionomial other than "it seems to fit". One obvious answer is that the negative binomial is the result of a poisson distribution where the poisson rate follows a gamma distribution. One interpretation is that our measurement error is poisson (counts from a sample), and the underlying variance between biological samples is gamma. But why gamma: it does not seem like an obvious answer as to the distribution to use.

I'm sure I've seen this written down somewhere before, using PGFs to figure out the result.

but writing this down has only resulted in an intergral I don't know how to solve!

So you assume a continuous mixture of Poisson distributions, say $$ X \mid \Lambda=\lambda \sim \mathcal{Pois}(\lambda),$$ where $\Lambda$ then has some distribution on the positive line.

If we assume that $\Lambda$ has a gamma distribution, results that $X$ has a marginal negative binomial distribution. You asks what happens if $\Lambda$ has a normal distribution. That doesn't seem like a natural model since a normal distribution can take negative values, which does not make sense here. Also, the proposal of a binomial mixture distribution seems strange, since why restrict $\lambda$ to integers? Here is a review paper on continuous Poisson mixtures you could have a look at it and try some of the more prominent examples. Table 1 page 50 in the cited paper is a list of examples, many of them difficult to use due to numerical issues.

An interesting idea would be to estimate the mixing density $g$ on $(0,\infty)$ nonparametrically. There are many possible methods and many papers.

One approach is to use a normal approximation by matching the moments.

We can do the same sort of approximation (matching the moments) with a negative binomial distribution.

In the examples below, we have plotted this approximation as well. The curve resembles more closely the histogram than the normal approximation, but it is still not exactly the same. 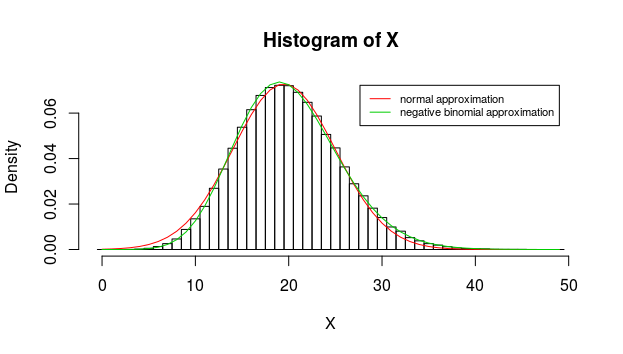 The problem with the normal approximation is that it does not work so well when $\sigma_X$ is not a lot smaller than $\mu_X$. This occurs when $\mu_X = np$ is small. 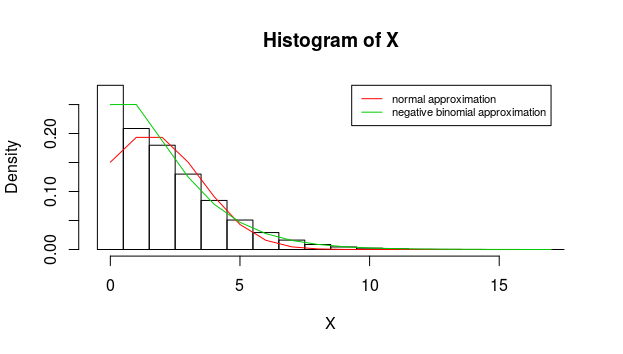 Not the answer you're looking for? Browse other questions tagged poisson-distribution probability-generating-fn compound-distributions or ask your own question.

0
Fitting for a Poisson-Gaussian Mixture Distribution