Update on 2/29/2020. All the material below and much more has been incorporated into a comprehensive article on this topic. The question below is discussed in that article, entitled "State-of-the-Art Statistical Science to Tackle Famous Number Theory Conjectures", and available here.

The purpose here is three-fold:

I am by a long shot mostly interested in answering the third question, which would be a spectacular result, unproven to this day. However, answering the second question is also of great interest, and probably of bigger interest to the readers.

Some great progress (with respect to the third question) was accomplished in a previous answer to a CV question, see here. @Whuber proved that the cross-correlation between the terms in the sequences $\{kp\alpha\}$ and $\{kq\alpha\}, k=1,2,\cdots$, is $\frac{1}{pq}$. Here the brackets represent the fractional part function, and $\alpha$ is irrational.

To answer the third question, note that $\sqrt{2}$ and $\sqrt{3}$ are linearly independent over the set of rational numbers, and $\rho_\infty$ can be approximated as close as you want using $p\alpha$ and $q\alpha$ instead of $\sqrt{2}$ and $\sqrt{3}$ for some irrational $\alpha$. But to get better and better approximations, you need $p$ and $q$ to tend to infinity, and the resulting correlation, equal to $\frac{1}{pq}$, tends to zero.

Below is the code used for my computations, creating simulated random numbers $X$ and computing the correlations between the binary digits of $pX$ and $qX$. It shows the variability from one sample to the other. 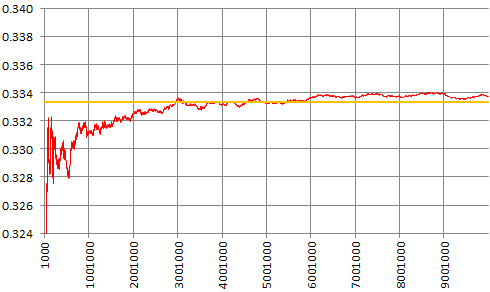 Possible approach to solve the problem

Instead of $X$ being irrational, consider a rational number with a large period, much larger than $p$ or $q$ (use same source code to produce the period) and let the period tends to infinity.

Not an easy question it seems. My answer here is still based on empirical evidence, but far easier to check. First, note that if we shift the digits of either $pX$ or $qX$ (that is by multiplying $pX$ or $qY$ by a power of two, positive or negative) any apparent cross-correlation in the two digit distributions vanishes. Only one particular shift produces a non-zero cross-correlation, and that's the shift produced when running the code posted in my question.

Here I will use the following notation:

The digits satisfy the recursions

Based on empirical evidence, we observe that

Let us consider the $p\times q$ matrix $M$ defined as follows: $M_{ij}$ is a positive integer, with 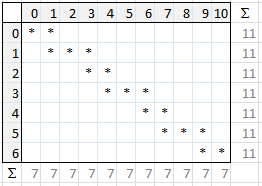 The above starred entries are based on counts computed on $10^6$ values of $(e_k,e'_k)$. These counts are featured in the table below. The binary digits $b_k$ were generated as i.i.d Bernouilli with parameter $\frac{1}{2}$ using the source code posted in my question.

The resulting matrix $M$ is as follows: 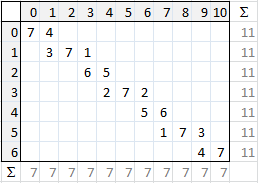 Not the answer you're looking for? Browse other questions tagged probability correlation convergence bernoulli-distribution cross-correlation or ask your own question.

5
Sanity check question about correlation between log-normal random variables
0
A question about the change in value of multiple correlation coefficient on multiplying each value with a variable quantity
3
Correlations between two sequences of irrational numbers
3
What is the limiting distribution of $Y_n = \sqrt{n}(\bar{X}_n-1)$ as $n \to \infty$?
4
Limit distribution associated with counts (non-trivial combinatoric problem)
9
Having a hard time with the law of the iterated logarithm
4
Probability distributions associated to the logarithm numeration system